Arab women turn to microloans to open up their own businesses

The SAWA initiative, which began in the country's south focusing on Beduin women, has recently expanded further North. 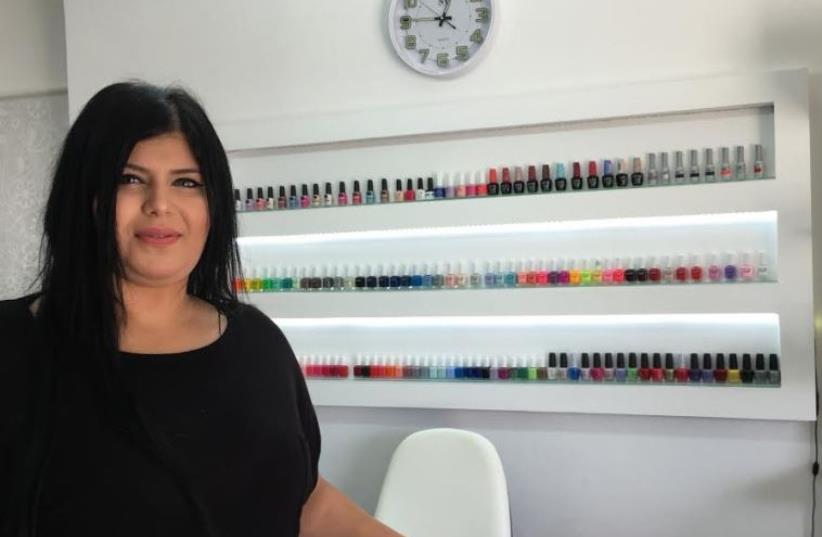 Mara Bachari opened up her own mani-pedi salon this year
(photo credit: NIV ELIS)
Advertisement
After working at a nail salon in a Kfar Saba mall for seven years, Jaljulya native Mara Bachari decided it was time to go into business for herself.“I learned everything, and my customers asked if I work at home. They asked for me personally when they set up appointments,” she said.The only problem: She couldn’t get a bank loan to set up shop in her house.Bachari’s problem is a common one, especially among Arab women. “The story is that there’s a population that has zero access to credit: women in Arab villages,” said Ran Kiviti, director of the Small and Medium Business Agency at the Economy Ministry.“This group doesn’t exist in the banking system. They get National Insurance through the postal bank, which isn’t really a bank, and they don’t have a way to establish credit,” he added.The problem is borne out in national employment statistics as just 47 percent of Arab women ages 25-54 are in the labor force compared with 79% of men.That’s one reason the Economy Ministry is supporting the efforts of SAWA, a Koret Israel Economic Development Funds (KIEDF) microfinance initiative that helps extend small loans to Israel’s underemployed and low-income populations.It follows the model of Grameen Bank, the microfinance organization pioneered by social entrepreneur Muhammad Yunus. The SAWA initiative, which began in the country’s South focusing on Beduin women, has recently expanded further north.Every day, Nivin al-Zabin, a loan representative in the Kafr Kasim office, makes her way to Arab towns such as Taiba to scout out possible candidates for the loans.“I look for stores with signs,” she said. Many women, she adds, already run small businesses out of their homes.“There are many fields – clothing designers, people who work computers at home, people who bake. But they’re in a tough economic position because they bank doesn’t want to give them money,” she said.SAWA offers two types of loans to women with promising business ideas. One is a group loan, in which about five women are each offered a loan of up to NIS 10,000 to be paid off over the course of a year. The catch is that they are each other’s guarantors, meaning that if one defaults, the others are on the hook.That dynamic, however, also means the women help each other out, encourage them and spread the word about their businesses.SAWA’s default rate is a mere 2.19%, less than even the 5% considered acceptable in the field of microfinance. The interest rate, too, is relatively low for microfinance: around 9%, as opposed to 18-22% (though for group loans the payment comes in the form of a fee, not an interest rate).Those figures are higher than bank loans, but SAWA, of course, takes greater risks. At this point, the interest does not cover all the expenses of the operations.The second type of loan, which can go as high as NIS 30,000, is available to women who already have businesses up and running. When the money is repaid, the entrepreneur can request another loan.That’s the type 39-yearold Feda Amer, a Kfar Kasim resident, took out when she decided to open a bridal gift shop.Amer had started buying and selling wedding gifts for “Nedunya” (dowry gifts) out of her home about three years ago and couldn’t find a good bank loan when she wanted to expand. Using her SAWA loan, she rented a store space. “There wasn’t this type of store in the village, this is the only one, and we always have sales,” she said.Her store is complete with bedding, kitchen gifts and even lingerie. She has amassed an Instagram following where she announces sales every day to keep the business flowing. She’s even taken orders from Egypt and Jordan, paid through Western Union.“Now I’m the process of opening up a second branch, just lingerie, imported from Turkey,” she said.To date, the program has provided 7,021 direct loans totaling NIS 51,861,500, according to Anna Avital, the assistant director of microfinance programs at KIEDF.As for Bachari, when she heard about the loan, she decided to go big.In March, she opened up her own shop, Mani-pedi, in Kfar Saba, just off Weizmann St., the city’s main thoroughfare, complete with the full spectrum of polishes, tasteful turquoise and gray seating and a framed wall poster that says “Keep calm and get a mani-pedi.”“My parents were shocked. They didn’t think they would see such a thing,” she said.“If not for the loan, I would have stayed at home. Had this loan not come about, I wouldn’t have this business.”