"This represents the first time that archaeologists have been able to successfully restore an element from the Herodian Second Temple complex," says expert. 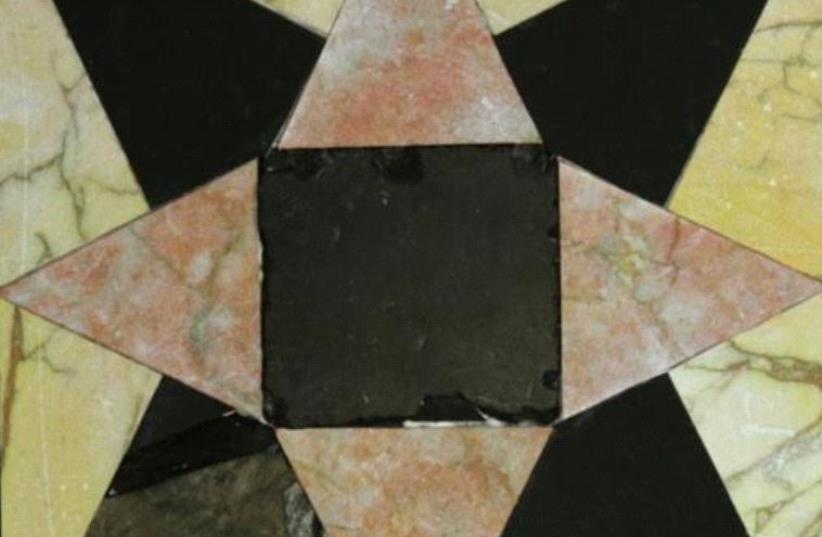 A reconstructed tile from the Second Temple.
(photo credit: ZACHI DVIRA/TEMPLE MOUNT SIFTING PROJECT)
Advertisement
For the first time since its destruction at the hands of the Roman Empire 2,000 years ago, several floor tiles from Jerusalem’s Second Temple’s courtyard have been reconstructed, archeologists announced on Tuesday.According to Dr. Gabriel Barkay and Zachi Dvira, co-founders and co-directors of the Temple Mount Sifting Project, the reconstruction is unprecedented.“This represents the first time that archeologists have been able to successfully restore an element from the Herodian Second Temple complex,” said Dvira at an unveiling of the tiles at the project’s headquarters in Emek Tzurim National Park, located on the western slopes of Mount Scopus.The regally designed ancient tiles likely featured prominently in the courtyards of the holy Temple during King Herod’s reign between 37 to 4 BCE, added Barkay.“It enables us to get an idea of the Temple’s incredible splendor,” he said.The Temple Mount Sifting Project, supported by the City of David Foundation and the Israel Archeology Foundation, was established in response to the illegal removal of tons of antiquities-rich earth from the Temple Mount by the Islamic Waqf in 1999. 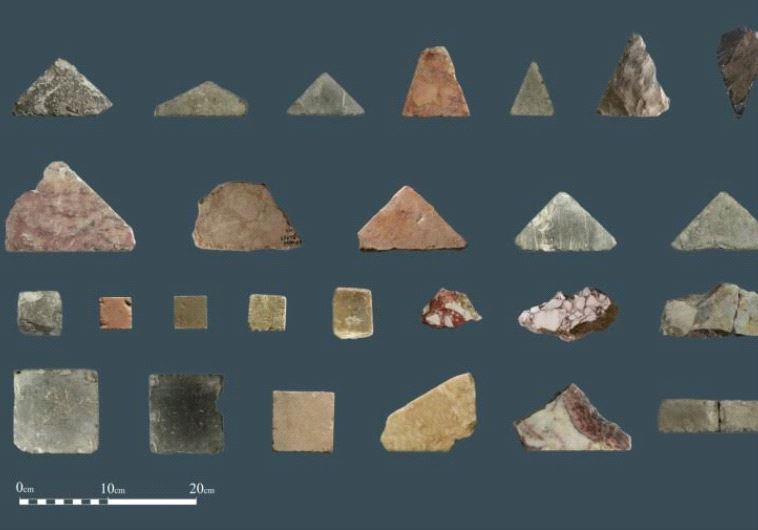 It is run under the auspices of Bar-Ilan University and the Israel Nature and Parks Authority.Frankie Snyder, a member of the Temple Mount Sifting Project’s team of researchers and an expert in the study of ancient Herodian-style flooring, said they succeeded in restoring the ornate tile patterns using geometric principles, and through similarities found in tile design used by Herod at other sites.“This type of flooring, called opus sectile [Latin for “cut work”] is very expensive, and was considered to be far more prestigious than mosaic tiled floors,” said Snyder, who has an academic background in mathematics and Judaic Studies.“So far, we have succeeded in restoring seven potential designs of the majestic flooring that decorated the buildings of the Temple Mount,” Snyder added, noting that there were no opus sectile floors in Israel prior to the time of King Herod.“The tile segments were perfectly inlaid, such that one could not even insert a sharpblade between them,” she explained.To date, approximately 600 colored stone floor tile segments have been uncovered, with more than 100 of them definitively dated to the Herodian Second Temple Period.“This style of flooring is consistent with those found in Herod’s palaces at Masada, Herodian, and Jericho, among others, as well as in majestic palaces and villas in Italy, also attributed to the time of Herod,” said Snyder.The tile segments – mostly imported from Rome, Asia Minor, Tunisia, and Egypt – were created from polished multicolored stones, cut in a variety of geometric shapes.“A key characteristic of the Herodian tiles is their size, which corresponds to the Roman foot, approximately 29.6cm.,” said Snyder.The possibility that large expanses of the Temple Mount during the Second Temple Period were covered with opus sectile flooring was first raised in 2007 by archeologist Assaf Avraham, director of the Jerusalem Walls National Park.Avraham’s theory was based on a description given by the first-century Romano- Jewish historian Josephus, who wrote in The Jewish War, “...the uncovered [Temple Mount courtyard] was completely paved with stones of various types and colors...”Moreover, Talmudic literature records the meticulously planned construction of the Temple Mount, describing rows of marble in different colors, including green, blue and white.“Now, as a result of Frankie Snyder’s mathematical skills, we have succeeded in recreating the actual tile patterns,” said Barkay.“Referring to the Temple that Herod built, the Talmud says that, ‘Whoever has not seen Herod’s building, has not seen a beautiful building in his life,’” he continued.“Though we have not merited seeing the Temple in its glory, with the discovery and restoration of these unique floor tiles, we are now able to have a deeper understanding and appreciation for the Second Temple, even through this one distinctive characteristic.”Since the Temple Mount Sifting Project’s inception in 2004, more than 200,000 volunteers from around the world have taken part in the sifting, representing an unprecedented phenomenon in the realm of archeological research.The restored tiles will be presented to the general public on Thursday at the 17th Annual City of David Archaeological Conference.