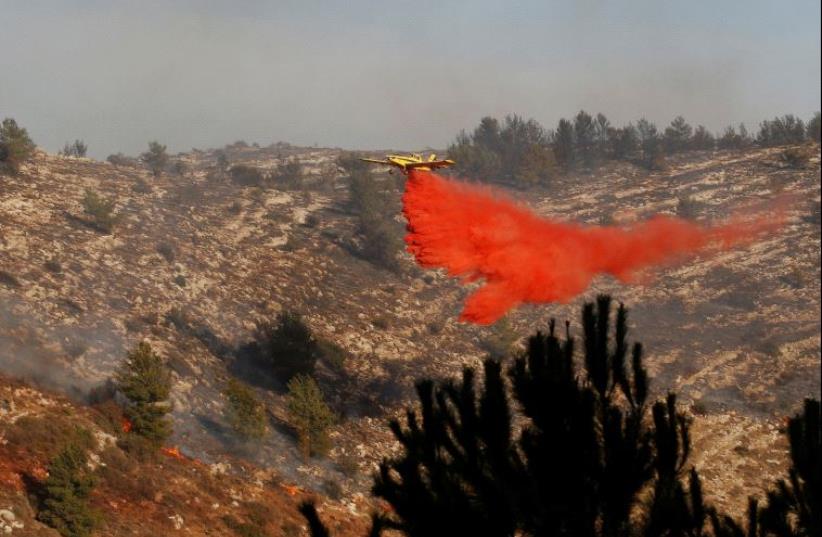 A firefighting plane drops fire retardant during a wildfire, near the communal settlement of Nataf, close to Jerusalem November 23, 2016.
(photo credit: REUTERS)
Anas Abudaabes, 29, of the Beduin city of Rahat, was finishing a day of work when he wrote a quick Facebook comment satirizing Arabs who expressed glee on social media over Israel’s fire disaster last week. An hour later, Abudaabes was in hand and ankle cuffs and being taken to the Rahat police station for interrogation.At the station, according to Abudaabes, the police translated his Facebook comments with Google Translate. They then contended that he was inciting Israeli-Arabs to commit arson. Abudaabes was released on five days house arrest on Sunday night. His case is still being examined for potential prosecution.“We don’t think it is a satirical post,” the Negev District Police spokeswoman told The Jerusalem Post on Thursday.
Abudaabes, a masters student in Media at Ben-Gurion University of the Negev, said the police misinterpreted his comments.
“The police told me that the post was incitement towards fires. For me this was ridiculous, it was so funny that they understood the exact opposite of my post,” he said.In the Beersheba Magistrate’s Court on Friday, Judge Alon Gabizon acknowledged the possibility of satire, but said Abudaabes should have taken into account how his words could be misinterpreted.Speaking to the Post, Abudaabes said his arrest highlights a chasm between Arab and Jewish society regarding humor.“When a Jew tells a jokes about Germany or the Holocaust, I wouldn’t be surprised if Arab people didn’t understand it. It’s not the same narrative, history, or society,” he said. “You can’t expect Arabs to understand jokes about the Holocaust, and you can’t expect Jews to understand when I quote Islamic scripture as a satire.”Nevertheless, the comment in question ends with the hashtags, “satire_not_serious,” and “the_smoke_is_blinding_the_eyes_and_heart.”The comment ironically calls on Arabs to start fires, advising, “Since the fires are from God, you’re protected. All you have to do is add flammable substances in a direction that faces away from your home.”Abudaabes, who has over 5,000 Facebook followers, said that he wrote the comment as a simple rebuke of those in Arab society who were supporting the fire, “at the time the fires were everywhere and I needed to say something. For me it was simple to be against the people celebrating these fires.”Accusations of a widespread arson attacks perpetrated by Israeli-Arabs where circulating among the media and right-wing MKs, when Abudabees posted his statement on November 25. Speaking in Haifa last Thursday night, Prime Minister Benjamin Netanyahu said, “We are facing the terrorism of arsonists.” And as Education Minister Naftali Bennett tweeted, “Only he to whom the land doesn’t belong is capable of burning it.”Police are investigating multiple suspicions of arson, but have said that it is too early to determine how many of the hundreds of fires that spread through Israel were acts of arson.At least one other person has been arrested for suspicion of incitement on social media. A Jewish man from Kiryat Ono who allegedly advocated for "revenge attacks" on Israeli-Arabs. The suspect was detained on Saturday and released on Sunday with restrictions after admitting to the charges against him.Public Security Minister Gilad Erdan claimed on Wednesday that 30% to 40% of the widespread fires set between November 18th and the 26th were arson.Abudabees believes that his case is an example of the Israeli government using Israeli-Arabs as scapegoats. “The atmosphere in Israel was just to look for this ‘fire intifada.’ This is my homeland, I live here too, and I have friends who were near the fire.”In the meantime, Abudabees is under a court-issued ban from Facebook for 15 days, so his next comments will have to wait until December 12
Subscribe for our daily newsletter