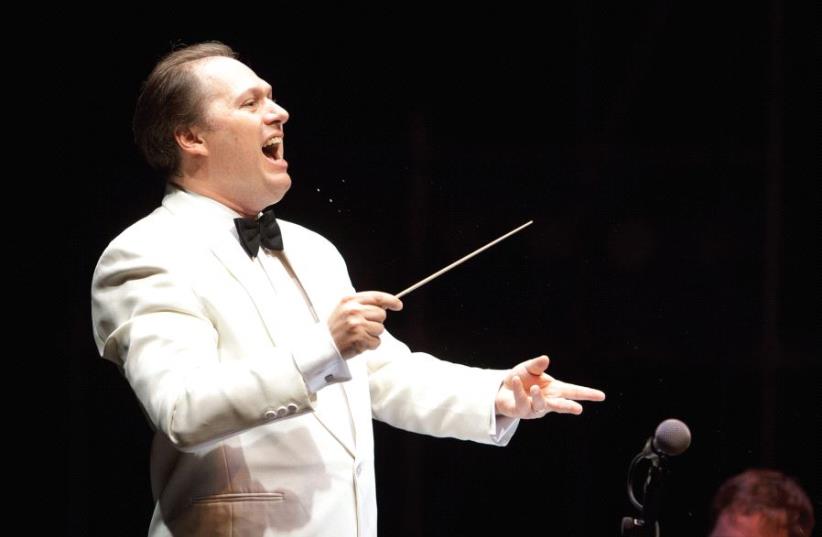 Roberto Minczuk
(photo credit: CÍCERO RODRIGUES)
Advertisement
Next week, two Brazilian musicians will make their Israeli debut with the Rishon Lezion Symphony Orchestra – conductor Roberto Minczuk and pianist Jean- Louis Steuerman. The program features pieces by Sergiu Natra, Villa- Lobos and Rachmaninov.In a phone interview from San Paolo, Minczuk talks about his career and his views on music.Minczuk is a second-generation Brazilian. His grandparents immigrated to Brazil from Belarus, Poland and Bessarabia (now Moldova). Born into a family of choral conductors, he played French horn as his major instrument but also piano and other instruments, “but from my childhood my father used to tell me that I should conduct,” he says.Minczuk is the fifth of eight children.“We all studied music at home, and four of us are professional musicians,” he adds.At the age of 14 he was accepted to Juilliard on a special scholarship and conducted for the first time at 15.Upon completing his studies there he went to Leipzig, where he joined the Gewandhaus Orchestra as a French horn player.“That was where I started studying conducting with maestro Kurt Mazur,” he recalls. “He had the utmost respect for music. For him, music was not about a musician or a composer but rather about the conductor. That is the major thing I learned from him. He was not only a conductor but also a spiritual leader who believed in the power of music, in its ability to inspire and to heal the human soul. He was a true mentor for me. Later, I served as his assistant in the New York Philharmonic Orchestra.”A spiritual student of Mazur, Minczuk believes in the ability of music to “communicate, to bring joy to people and make them think about their life. For me, music is a celebration of life,” he asserts.This approach is reflected in the program of the concerts in Israel.“Among other pieces, we will perform Bachianas Brasileiras No. 3 for Piano and Orchestra by Villa- Lobos. This is a unique and powerful piece, based on Brazilian music – melodies, songs and dances in the form and style of Bach. This is the Brazilian soul, with its dances and passions,” he says.He goes on to say that Rachmaninov’s Symphony No. 1 is a piece that is rarely performed.“I’m not even sure if it was ever played in Israel,” he says.“Rachmaninov composed it when he was very young. According to legend, the conductor/composer Glazunov, who conducted the premiere, hated Rachmaninov’s music so much that he went to the podium totally drunk and ruined the performance. As a result, the young composer stopped writing music for a few years and destroyed the score of the piece.Luckily, it was found and restored later. When performed some 50 years later, it turned out to be a great success. It is a very complex and vivid piece.”The concerts will take place on February 8 at 8:30 p.m. at Beit Ha’am in Rehovot; February 9 and 11 at 8:30 p.m. at Heichal Hatarbut in Rishon Lezion; February 12 at 8 p.m. at the Tel Aviv Performing Arts Center. For tickets: (03) 948-4840