“And after these few days, I feel like I knew her, even though I’d never met her, because there’s just been an outpouring of love toward her, and appreciation.” 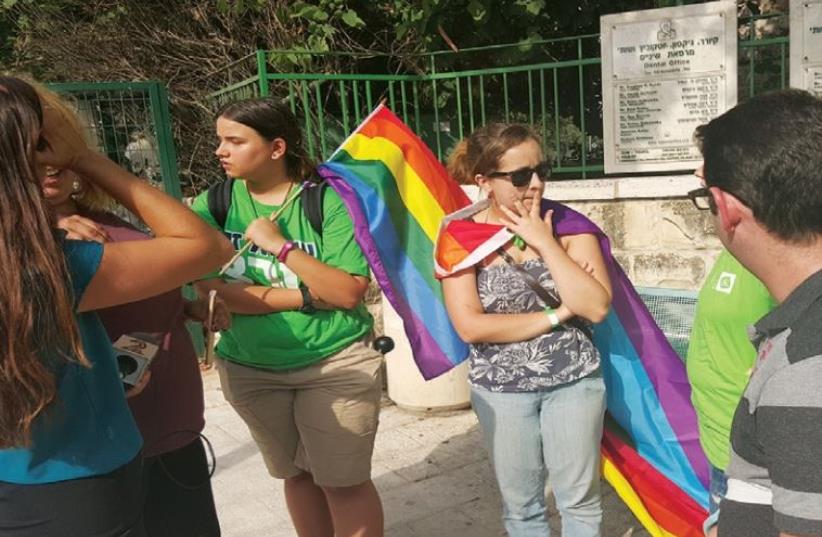 Noam Eyal (right), a stabbing victim, and others revisit the site of last week’s pride parade attack, near the corner of the capital’s Keren Hayesod and Washington streets.
(photo credit: JASON SHALTIEL)
Only a few hours after the announcement of Banki’s death, hundreds gathered at Jerusalem’s Zion Square to honor and remember her. The crowd was mournful and quiet; few words were exchanged, and tears covered the faces of many attendees.The vigil began with a video message from Prime Minister Benjamin Netanyahu, who sent his condolences to Banki’s family and said their daughter “was murdered because she courageously supported the principle according to which everyone is entitled to live their lives in dignity and safety. We will not allow the abhorrent murderer to undermine the fundamental values upon which Israeli society is based.”Korin Allal, a lesbian singer, performed “A Song for Shira” – which she had written especially for Banki – before the somber crowd at the request of the girl’s family. A large rainbow flag hung behind her, and photos of Banki were projected onto a screen as she sang.
Read More...
Many in the crowd held candles, revealing faces filled with sorrow. Some formed their candles into heart shapes on the ground and sat around them.Noa Yanai, 18, spent some time at Banki’s vigil comforting her friends and confiding in others.“I didn’t know her personally, but I’ve just been nonstop hearing for the last few days what an amazing person she was,” Yanai told The Jerusalem Post, using her trembling hand to wipe tears from her face. “And after these few days, I feel like I knew her, even though I’d never met her, because there’s just been an outpouring of love toward her, and appreciation.”The Sunday night gathering was organized by the Jerusalem Open House for Pride and Tolerance, which provides direct services to lesbian, gay, bisexual and transgender individuals in the capital and its surrounding communities, while advocating for equality and recognition in Israeli society at large.Tom Channing, its director of development, stated that friends and relatives of the murdered teen could not attend the vigil; he explained that most of them were still in shock over her death.Many members of the Open House were present, however, as were people who had found out about the vigil through social media. On the event’s Facebook page, over 2,000 people said they would be at - tending.Several high-school students who were part of the Tel Aviv-based Noam youth movement came with their counselor, Yoni Avitan, to pay their respects. Avitan, wearing a kippa, expressed concern for his own well-being as a practicing Jew who happens to be gay.“It’s hard to think about how Jewish society reacts to you,” he said. “I have my way of Judaism, and to understand that people want to hurt me or kill me just because of my identity is hard to realize.”Banki’s attacker, Yishai Schlissel – a haredi man who had recently finished a 10-year prison term for stabbing three marchers at the 2005 Jerusalem Pride Parade – wounded five others in his rampage.One of those five, Noam Eyal, returned to the scene of the assault on Sunday, just hours before Banki’s death was announced. Still recovering from the stab wound in his back, he expressed optimism for the future. Asked if he would attend again next year, he responded, “Yes, for sure.
Cancel Subscription