Antiquities Authority: Coins minted during reign of Alexander the Great represent one of most significant finds in years.

By DANIEL KLEO GIOSUÈ EISENBUD
Rare 2,300-year-old silver and bronze coins, jewelry found in ancient northern cave
Advertisement
A rare cache of 2,300-yearold silver and bronze coins, minted during the reign of Alexander the Great, were recently discovered by a group of amateur explorers in an undisclosed ancient stalactite cave in northern Israel, the Antiquities Authority announced on Monday.According to authority officials, the coins represent “one of the most important discoveries to come to light in the north of the country in recent years, and will require much time to study in order to crack the secrets of the cave.”The finding was made by three members of the Israeli Caving Club, Reven Zakai, his son Hen as well as Lior Halony, who crawled along different parts of the slender cave for hours several days ago.“The youngest member, Hen, 21, said he forced his way into one of the narrow niches when he suddenly caught sight of a shining object,” Antiquities Authority spokeswoman Yoli Shwartz said.Shwartz added that she cannot disclose the exact location of the cave for fear of illegal poaching. 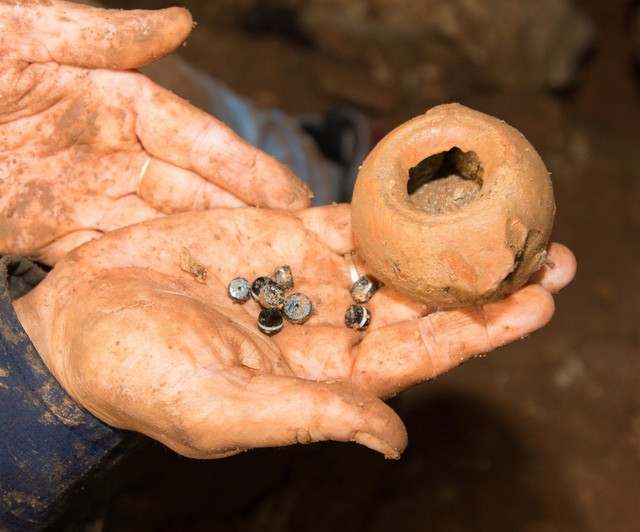 Rare 2,300-year-old silver and bronze coins, jewelry found in ancient northern cave(Courtesy IAA)
“There he discovered two ancient silver coins, which it later turned out had been minted during the reign of Alexander the Great, who conquered the Land of Israel at the beginning of the Hellenistic period, during the late fourth century BCE,” she said.Nearby the coins, Shwartz said, a cloth pouch containing several pieces of silver jewelry – including rings, bracelets and earrings – were also discovered.Dr. Eitan Klein, deputy director of the authority’s Unit for the Prevention of Antiquities Robbery, said he believed the coins had been hidden by their owner during a period of heightened unrest.“The valuables might have been hidden in the cave by local residents who fled there during the period of governmental unrest stemming from the death of Alexander; a time when the Wars of the Diadochi broke out in Israel between Alexander’s heirs following his death,” said Klein. “Presumably, the cache was hidden in the hope of better days, but today we know that whoever buried the treasure never returned to collect it.”
Rare 2,300-year-old silver and bronze coins, jewelry found in ancient northern cave(Courtesy IAA)
Upon realizing the significance, Klein said the three explorers contacted his office, and the two groups reentered the cave together last weekend, where they discovered numerous pottery remnants.“In some regions of the cave ancient pottery vessels were found on stalagmites that had developed,” he said, adding that some had bonded with the limestone sediments and cannot be separated.“The combination of a stalactite cave and archeological finds is both fascinating and rare,” Klein continued. “The finds in the cave will allow the researchers – archeologists and geologists alike – to accurately date both the archeological finds and the process of stalactite development.”After analyzing the findings in the authority’s laboratory, researchers determined that some of the artifacts date back to the Chalcolithic, or Copper, period 6,000 years ago, the Early Bronze Age 5,000 years ago, the Biblical period 3,000 years ago and the Hellenistic period, approximately 2,300 years ago.Meanwhile, Amir Ganor, director of the Unit for the Prevention of Antiquities Robbery, commended the three members of the caving club for immediately contacting authority officials.“They understood the importance of the archeological discovery and exhibited exemplary civic behavior by immediately bringing these impressive archeological finds to the attention of the Antiquities Authority,” said Ganor. “After the gold treasure from Caesarea [was discovered by divers], this is the second time in the past month that citizens have reported significant archeological finds, and we welcome this important trend.”Ganor went on to caution other amateur explorers to remember that all antiquities belong to the state, and that failure to report them – or removing antiquities from their location and selling or trading them in the black market – is an offense punishable by up to five-years imprisonment.