‘This is the 4th inscription revealed so far dating to the 10th century BCE from the Kingdom of Judah,’ says Antiquities Authority. 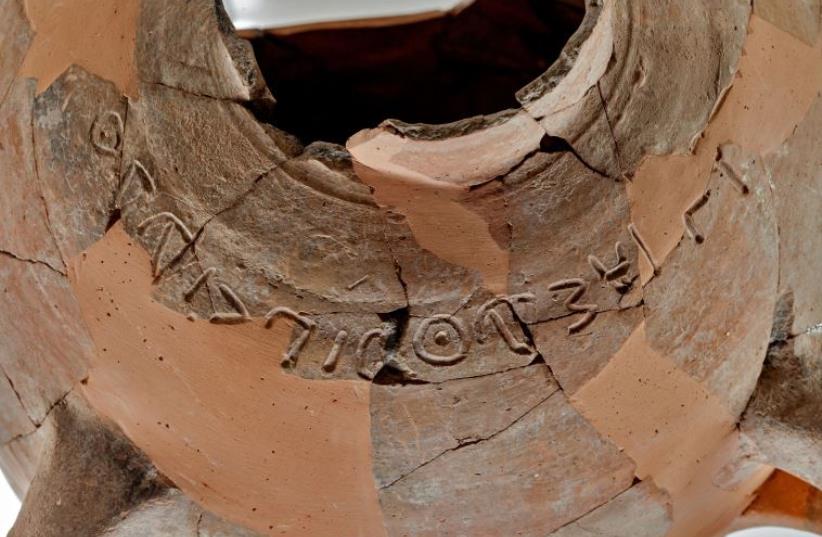 The jar following restoration in the Israel Antiquities Authority laboratories.
(photo credit: COURTESY OF TAL ROGOVSKY)
Advertisement
A rare inscription dating back to the time of King David, discovered at Khirbet Qeiyafa in the Valley of Elah outside of Beit Shemesh, was displayed for the first time in Jerusalem on Tuesday by the Israel Antiquities Authority.According to the IAA, scattered shards of a 3,000-yearold ceramic jug were first unearthed in 2012 during excavations carried out by Prof. Yosef Garfinkel of the Institute of Archaeology of the Hebrew University and the IAA’s Saar Ganor.Letters written in ancient Canaanite script were discernible on several of the shards, sparking the curiosity of the researchers.Subsequent intensive restoration work conducted in the IAA’s artifacts treatment department – during which hundreds of pottery shards were glued together to form a whole jug – determined that it was inscribed with the words “Eshba’al Ben Beda’.”The following letters appear from right to left: aleph, shin, bet, ʽayin, lamed. (Courtesy of Tal Rogovsky)
Rare inscription from King David era discovered in the Valley of Elah
“This is the first time that the name Eshba’al has appeared on an ancient inscription in the country,” Garfinkel said, noting that Eshba’al Ben Shaul ruled over Israel at the same time as David, and is mentioned in the Bible.“Eshba’al was murdered by assassins and decapitated, and his head was brought to David in Hebron (II Samuel 3-4),” he said. “It is interesting to note that the name Eshba’al appears in the Bible, and now also in the archaeological record, only during the reign of King David in the first half of the 10th century BCE.“This name was not used later in the First Temple period.The correlation between the biblical tradition and the archaeological finds indicates this was a common name only during that period.”Moreover, he said the name Beda’ is unique, and does not occur in ancient inscriptions or in the biblical tradition.Ganor added that during that time there appeared to be a reluctance to use the name Eshba’al, which was reminiscent of the Canaanite storm god, Ba’al.“The original name was, therefore, changed to Ish- Bashat, but the original name of Eshba’al was preserved in the Book of Chronicles,” he explained. “Thus, for example, the name of the warlord Gideon Ben Joash was also changed from Jerrubaal to Jerubesheth.”Khirbet Qeiyafa is identified with the biblical city of Sha’arayim, the archeologists said.IAA spokeswoman Yoli Shwartz added that a fortified city, two gates, a palace and storerooms, dwellings and cultic rooms also were exposed there during several seasons of excavations overseen by Garfinkel and Ganor.“The city dates from the time of David, that is, the late 11th and early 10th centuries BCE,” she said.“Unique artifacts that were previously unknown were discovered at the site. For example, in 2008, the world’s earliest Hebrew inscription was uncovered there. Now, another inscription from the same period is being published from the site.” 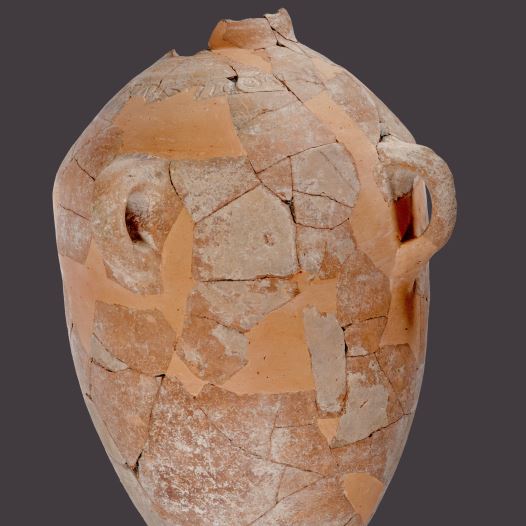 THE JAR following restoration in the Israel Antiquities Authority laboratories. (Courtesy of Tal Rogovsky)Garfinkel and Ganor said that until approximately five years ago, no inscriptions dating to the 10th century BCE from the Kingdom of Judah were known to exist.In recent years, four inscriptions have been published: two from Khirbet Qeiyafa, one from Jerusalem and one from Beit Shemesh, Garfinkel said.“This completely changes our understanding of the distribution of writing in the Kingdom of Judah, and it is now clear that writing was far more widespread than previously thought. It seems that the organization of the kingdom required a cadre of clerks and writers, and their activity is also manifested in the appearance of inscriptions.”