Regina went from "On the Radio" to rocking in Ra’anana.

By ARIANE MANDELL
Regina Spektor performs at the Ra’anana Amphipark
(photo credit: LIOR KETER)
Advertisement
It was a starry, balmy Saturday night at Ra’anana’s Amphi-Park as singer-songwriter Regina Spektor took the stage. “Shalom Eretz Israel!” she greeted the eager crowd, then straightaway sung several verses of “Shalom Aleichem,” the traditional Shabbat melody, adding “Shavua Tov,” a timely greeting for the beginning of the new week.Her third appearance in Israel (following two shows at Tel Aviv’s Barby Club in 2007 and a sold out Cesarea’s Amphitheater in 2013), Spektor and her Steinway were joined on stage by Mathias Künzli on drums, Brad Whiteley on keyboards and Israel’s own Yoed Nir on cello. Opening with “Folding Chair,” Spektor proceeded to serenade the audience with two hours of perfectly enunciated musical storytelling. Rare in Israel, and in live music in general, each word of each of Spektor’s carefully composed songs was perfectly audible, meaning listeners could really get lost in the palpable nostalgia of tunes like “No me quitte pas,” drawing audiences into the details of familiar New York and the romance of Paris, or get wrapped up in the intriguing idea of a hidden and eerily charming gateway to hell in “The Grand Hotel.”It also meant that Spektor’s more pointedly critical songs were also perfectly clear, and they certainly struck a strong chord. She remarked that she’d been having the hardest time on tour reading news about the “Divided States of America.” Regarding the recent white supremacist rally in Charlottesville, Virgnia, she said, “Just… f*cking nazis. They’re back. Who knew? So soon?” 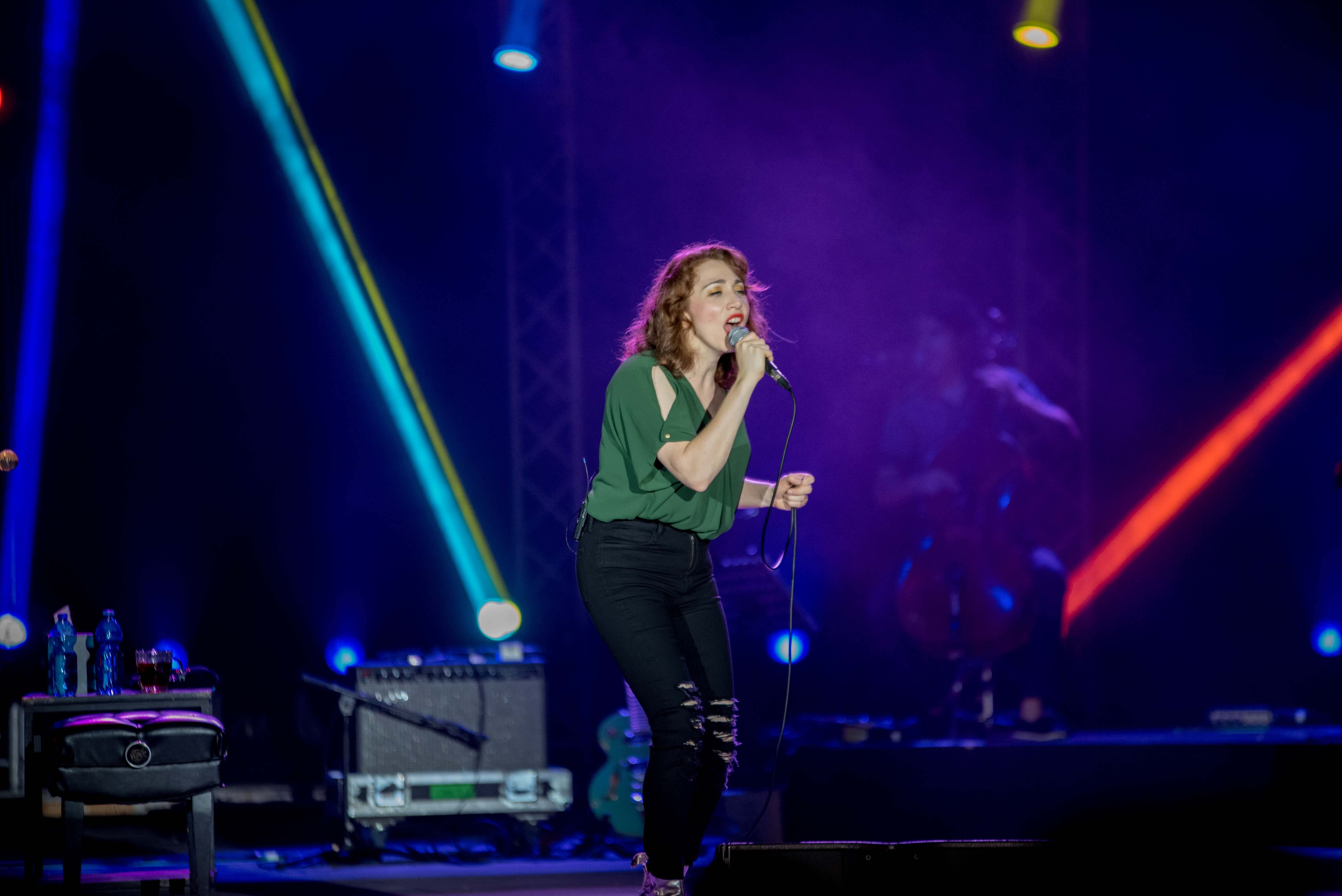 Regina Spektor performs at her concert in Ra’anana Amphi-Park (LIOR KETER)
It would seem that Regina Spektor knew, considering she previously stated that she has faced antisemitism all her life, and that in fact, being targeted as a Jew is what most made her identify with Judaism. When her family moved from Russia to the United States when she was nine, she still felt “other.” She told The Guardian last year, "Instead of being the Jewish girl in a Russian school I became a Russian girl in a Jewish school. I knew I’d stay the different girl forever. I had dumb teenagers telling me to go back to my f***ing country. Telling me we were taking their jobs. I got so pissed off I was like, ‘You’d better believe I’m going to take your job, I’m going to take your job and three other jobs, too.’ You grow up with that. I came with refugee status – I was a legal alien."On that note, she dedicated “Ballad of a Politician” to leaders who show empathy and unite instead of divide people, saying she hoped that soon the song would become irrelevant. While the smattering of tunes featuring Spektor on synth or guitar were an interesting change, the most stirring tracks were certainly those which focused on Spektor’s unique voice and her skillful piano-playing, like “The Light,” with its sweeping chorus, and “Apres Moi,” with its thrumming refrain switching to Russian in the second half to enthusiastic applause. Spektor was mostly loyal to the studio version of her songs, demonstrating her unique vocal skills as she seemed to at times create her own echo and looping effects live on stage. In an era in which many artists are practically bionic in the ratio of their own abilities to the aid of machines, Spektor swept the stage, completely human and entirely amazing. Although the sound was on point, the show left something to be desired visually. Sitting sideways on stage at her piano, Spektor’s back was consistently to half of the audience, which seemingly could have been remedied by angling the piano on a diagonal. There were also no screens aside the stage, which meant only the first few rows could see any details in her expression. With songs like Spektor’s, one would imagine the emotion on her face would add a lot of flavor to the experience, so it was a shame. She certainly made the best of the arrangement, however, communicating her sentiments with her intonation and dynamic range. Spektor made several mistakes throughout the night, such as incorrect chords “Bobbing for Apples.” “Oh f*ck,” she said demurely, “I don’t know how to play guitar, really. This is what happens when you put a piano girl on a guitar.”  Later, back on the keys, “Obsolete” suffered three false starts, however, she was so completely lovable and charming that the slight stumbles seemed to bother no one. Between each song she spread her arm towards the audience and uttered a diminutive “Todah Raba!” and all was and would be forgiven. The entire audience “awwwww’d” when she announced the show was being broadcast on air, and then said in an adorable attempt at an Israeli accent, “Shalom, rah-dee-oh!”
Regina Spektor shows appreciation to the audience at her Ra’anana Amphi-Park concert (LIOR KETER)
Unsurprisingly, the biggest hits with the crowd were well-known tunes like “Us,” and “Time Served,” the theme to Orange is the New Black, which featured added prison sound effects, and to Spektor’s credit was performed with full dedication, not betraying any fatigue around the oft-requested tune. “Fidelity” was less on point, played at a faster tempo than the album version and with less soul. Resonant ballad “On the Radio” was curiously absent from the setlist. The crowd lavished love upon Spektor throughout the evening, shouting their affection in Hebrew and English alike, and finally rushing the stage near the end of the show, crowding up to her with phones held aloft during “Hotel Song.”Spektor loved them right back. “I’ve had some sun, and some sea, and all my freckles are out, and I’m very happy to be here,” she said affectionately of the Holy Land, explaining that she’d first starting singing in front of people on a trip to Israel through the Nesiya Institute when she was 16. Completing the circle, she remarked that it was “a beautiful place to finish the tour,” and said “Thank you so much Israel, we love you, mi kol ha lev,” with all her heart. Spektor closed the encore with a fully-invested “Samson,” with which the audience sang along, every word. “I loved you first, Regina!” cried one fan, echoing the song’s lyrics. Whichever love came first, Regina Spektor’s romance with Israel was fully realized Saturday night, and seems to have staying power.