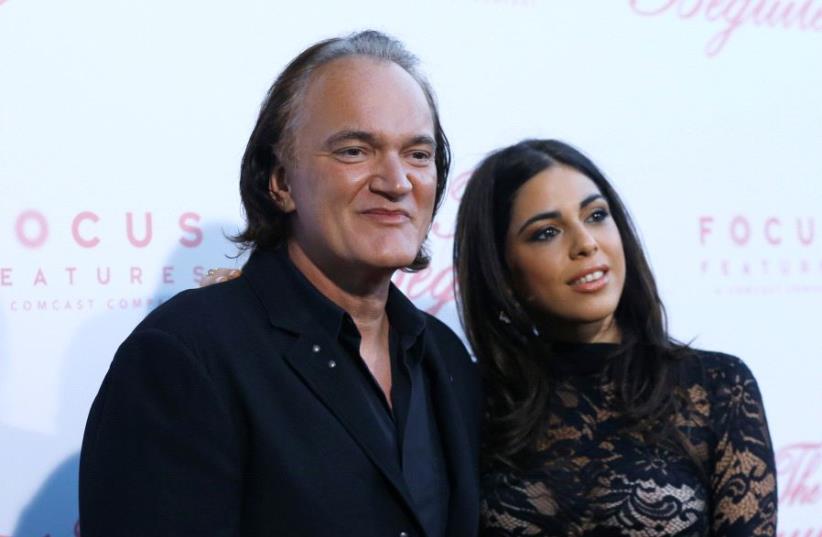 Director Quentin Tarantino and Daniela Pick pose at a premiere for 'The Beguiled' in Los Angeles, June 12, 2017
(photo credit: REUTERS/MARIO ANZUONI)
Advertisement
Quentin Tarantino, 56, and his wife, Israeli actress/model Daniella Pick, 36, officially became the proud parents of a baby boy on Saturday afternoon. This is after Pick gave birth in Ichilov hospital in Tel Aviv, according to a report from Pnai Plus magazine.
The couple announced the pregnancy last August, only nine months after the two were wed in a lavish Los Angeles wedding in November of 2018.
Last November it was revealed that the couple had begun renting an apartment an a lavish northern Tel Aviv neighborhood, fueling rumors of a possible permanent move by the couple from their current Beverly Hills residence.
“I have some short trips [back to the US] planned for the [Oscar] awards ceremony. And of course, we’ll be here for the birth and after.”
Tarantino discussed life in Israel in detail in an interview with Yediot Aharonot, last month, saying that “I love the country and the people are really nice, very nice to me and they seem excited that I’m here.”
After winning a Golden Globe for Best Screenplay last month, he thanked Pick in Hebrew, saying “I can’t have a conversation now, but I know many words in Hebrew.” Tarantino said he birth of his baby will inspire him to learn more, saying “obviously, I’m going to learn. I don’t want my boy or girl to speak a language I can’t understand.” The couple celebrated both Hanukkah and Christmas, watching the classic American holiday film, "It’s a Wonderful Life" together.
They met in Israel 10 years ago, while Tarantino was promoting his critically acclaimed WWII Jewish revenge fantasy, "Inglourious Basterds".
Pick even has a cameo in Tarantino's latest film, "Once Upon a Time . . . in Hollywood", which was released last August to widespread critical acclaim, raking in 2 oscars and 3 golden globes.