The conference was geared toward women who are running businesses or seeking to establish one. 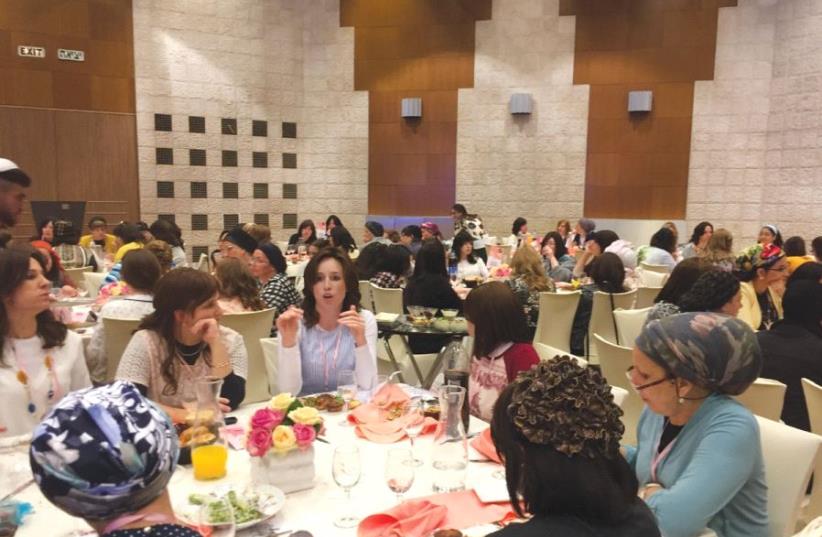 ULTRA-ORTHODOX WOMEN network at the Jerusalem International Convention Center yesterday
(photo credit: TEMECH)
Advertisement
Hundreds of haredi women gathered at the Jerusalem International Convention Center on Wednesday for a conference on business development and management held by the Temech nonprofit organization.Temech was founded in 2005 by Rabbi Shmuel Bloom to help the haredi community overcome the poverty it had found itself in. It has helped place 6,000 haredi women in employment and assisted more than 2,000 haredi women to open their own businesses.The conference was geared toward women who are running businesses or seeking to establish one, providing ample networking opportunities as well as putting on talks by leading business owners and other experts on business development and management.Temech director Shaindy Babad said one of the biggest problems faced by haredi women seeking to establish a business was that in most cases they are the first person in their family to have ever attempted such a venture.There is therefore a large knowledge deficit, a lack of people to turn to for advice, and few if any business connections.“Temech puts on workshops and courses in business management and development, marketing, branding, budgeting, raising capital and everything you can think of to help haredi women deal with these challenges,” Babad said.The organization also provides women with office space in Temech’s Jerusalem Hub, where for a fee they can make use of computers, meeting rooms, and other office necessities.Babad also explained the organization’s strategy for its other major function, job placement.Temech’s placement strategy is based on a model of employment- based training, where the organization approaches businesses to understand their needs and then provides them with relevant candidates to be trained in the professional skills needed for the work required.According to Babad, the organization has had success in placing haredi women in a wide variety of fields, from sewing IDF uniforms in Arad to working for a digital animation company that provides services to Disney.Bloom, who was still living in the US when he founded Temech, said that his motivation for starting the initiative was to create a way for American Jews to help the haredi sector in Israel.The project began by encouraging American businesses to open branches in Israel and employ haredi women, but this restricted employment opportunities to English-speaking women, who represent a minority of the haredi community in Israel.Temech soon began working with Israeli businesses and demonstrated to them that haredi women would be effective and loyal employees.Bloom said the turnover for haredi women employees is significantly lower than that of the general workforce, which is an attractive proposition for employers.The frequent emphasis of haredi women on their home and children as their central concern and goal means that they are less likely to seek promotion or change jobs, he explained.Addressing the conference, Chief Rabbi David Lau warmly praised working haredi women, although he insisted that their “greatest merit” was to raise children to serve God.He also noted that haredi women who work and bring in an income give their husbands the opportunity to study Torah full time in yeshiva.“You allow your husbands to sit and learn; you have the merit of sustaining the Torah world,” said the chief rabbi, ending with a blessing that the women merit to raise children “who serve God, are great Torah scholars and sustain the Jewish people.”