View from ‘The Women’s Balcony’ 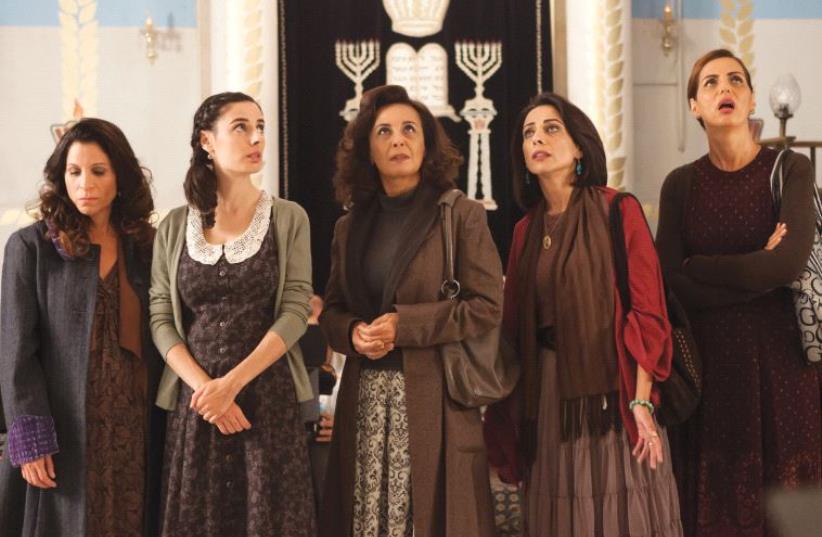 A SCENE from ‘The Women’s Balcony.’
(photo credit: ETIEL TZIYON)
Advertisement
‘I gave up on trying to make it universal,” says Shlomit Nehama, the screenwriter of The Women’s Balcony, a movie set in the world of traditional Mizrahi families in Jerusalem. “What matters is how much you connect to the characters. If you connect emotionally, they can be from any culture.”The first-time screenwriter wanted to tell a story set in the Bukharan Quarter of Jerusalem, about a community where life revolves around a synagogue. People know their roles and accept them. But when the women’s balcony collapses during a bar mitzva, seriously injuring several members of the congregation and destroying the building, the dynamics change. The men are drawn to a young, charismatic ultra-Orthodox rabbi who tells them the balcony fell because the women don’t cover their hair and dress modestly enough. He convinces them that they should not include a women’s balcony in the rebuilt synagogue – that there should not be any place for women inside the synagogue anymore. The women, who have grown up obeying male authority, finally rebel.This may sound like a polemic, but the movie is actually a gentle comedy, and portrays all the characters (even the interloping rabbi) with affection and respect. Nehama, who worked for years in television, is pleased that audiences have responded to the movie, which is a hit in Israel, where it is playing throughout the country, and received great reviews at the Toronto International Film Festival, where it acquired a US distributor.The movie, which was directed by Emil Ben-Shimon, stars some of Israel’s best loved actors, among them Evelin Hagoel, Igal Naor, Orna Banai, Avraham Aviv Alush, Itzhik Cohen, Yafit Asulin and Assaf Ben-Shimon.The positive reactions to the movie abroad surprised Nehama, though.“The nuances are so specific to religious Judaism and Israeli life,” she says. But in telling a story rooted in a specific place, she has touched a chord.“I’m happy that people enjoy it, here and around the world, because I want people to see the movie,” she said. “You think it will be light comedy, a seret bourekas [Hebrew for a silly, formulaic comedy] but little by little, you see there is more to it.“I made something very feminist, but I didn’t mean to... It is very clear to Eti [the heroine, played by Evelin Hagoel] that what is happening is not fair and we will fight it, that this rabbi is not one of us. That is the main thing, the struggle against extremism.”Nehama, who grew up in Jerusalem and Petah Tikva in communities much like the one portrayed in the film, knows and respects this world, although she no longer belongs to it in the way she once did. Becoming secular at 18, she is still close to her extended family and wishes that her children could have spent more time in this community while they were growing up.“Every time we get together [with her extended family] I have the feeling that my kids have a community where they get unconditional love, I see how good it is for them.”Nehama sees this kind of traditional community, where the women observe the laws of kashrut and the sabbath but don’t find it necessary to cover their hair or wear long sleeves, as under attack from a kind of allor- nothing approach to religion.“This community was unchanged for over 50 years, it kept its traditions. But now, it’s very, very sad. It isn’t a moral deterioration – the traditional Jews aren’t lazy people who don’t want to follow mitzvot. It was just a more relaxed approach to observance and identity. But now there is no room for moderation. That’s the story of our generation, moderation has disappeared. In this atmosphere you must take a side.”And when people take sides, they become either more secular or ultra-Orthodox, Nehama said. In the movie, as the characters react in different ways, they don’t trust each other’s kashrut anymore and can’t eat together, which is one of the ways that the more extremist approach starts to destroy their community.“It’s very emotional, and suddenly you can’t go to someone else’s house.” Because of this trend towards extremism, Nehama worries that “There will be no continuation of the community I grew up in. People will be ultra-Orthodox, or they will be gone.”But although Nehama’s concern about the changes in this world are clear in The Women’s Balcony, the movie is primarily a good story, and that’s the way she wanted it.Although she had written scripts for children’s television shows before, writing a feature film was uncharted territory for her, and she consulted screenplay how-to books as she worked.“I read a lot, I saw many movies. I liked British movies about people in small towns very much, especially Waking Ned Devine,” about a lottery winner in a small Irish village. “I loved the atmosphere of that movie,” which had parallels to the one she wanted to create in hers.What has been most gratifying for Nehama, who is in the early stages of a new script, is the feedback she has gotten from women who say the movie reflects their lives.“I get very intimate messages from women, about how they are in their marriage and how they are out of the house and how the movie expresses what they feel. I really wasn’t prepared for this.”