Among the most prominent sites visited were the Caesarea National Parks with more than 7,000 visitors, Masada with about 4,500 visitors, The Nature and Parks Authority said. 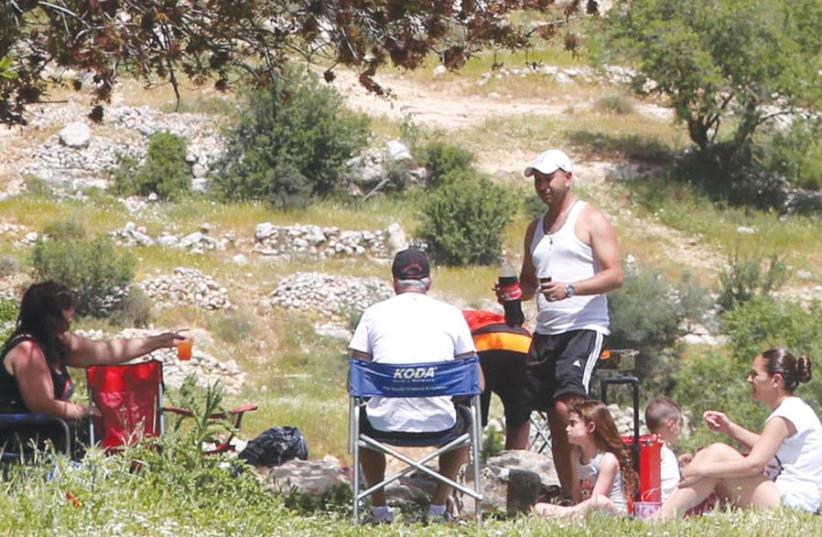 ISRAELIS ENJOY the Passover holiday with a hike and picnic.
(photo credit: MARC ISRAEL SELLEM/THE JERUSALEM POST)
Advertisement
Over 160,000 people soaked up the sun and  enjoyed the fresh air across Israel's parks and reserves on Monday as Earth Day and the intermediary days of Passover coincided.Among the most prominent sites visited were the Caesarea National Parks with more than 7,000 visitors, Masada with about 4,500 visitors, The Nature and Parks Authority said.Beit Guvrin in the Lakhish region, Eshkol (the Besor) in the South, and Yarkon Tel Afek near Tel Aviv saw more than 3,000 visitors at each site, while the country's nature reserves also saw a spike in visitors. The Ein Gedi oasis in the Judean Desert had more 5,000 visitors, while the Banias Nature Reserve near Mount Hermon, the dripstones cave and the cliffs of Tzukim in , which cling to the Dead Sea with 3,000 visitors each.Other notable landmarks that crowds flocked to were the Apollonia National Park in Herzliya and the Yotvata Wildlife Park on the way to Eilat, where the Israel Nature and Parks Authority has conducted guided tours of wildlife.Shaul Goldstein, director general of the Israel Nature and Parks Authority, said that Monday's "weather compared to yesterday [Sunday] has already improved and you can go hiking in the area. A bit of rain and a little wind, but it's an experience and remember it for the better."Raya Shurki, Director of the Community and Community Division at the Israel Nature and National Parks Protection Authority echoed these sentiments. "With the improvement in the weather, many travelers voted with their feet and chose to go to nature reserves and national parks," Shurki said.