"We’ve seen Jews expelled from all over the world, and now we come back to our homeland and we continue to expel ourselves from our own homes," says protester.

By DANIEL K. EISENBUD
DECEMBER 13, 2016 21:17
Protesters in Jerusalem
Advertisement
Hundreds of men, women and children braved the cold winds at Paris Square in Jerusalem on Tuesday night to protest the Supreme Court’s order to demolish Jewish homes in the West Bank settlement of Amona, as well as its rejection of an appeal to delay the demolition.Gathered a few hundred meters from the Prime Minister’s Residence under an almost-full moon, protesters held large placards stating, “Don’t help our enemies destroy Jewish homes!” and “Israel: The only country that destroys Jewish homes!” 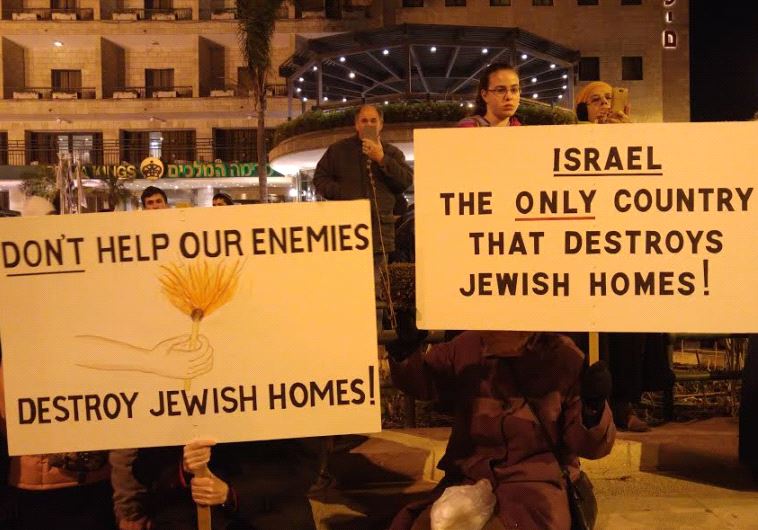 Demonstrators gather in Jerusalem to protest the Amona ruling.(photo credit: DANIEL K. EISENBUD)Ben Friedman, a 30-year-old writer from Ma’aleh Adumim, stood near a large Israeli flag that waved in the wind, and held a smaller handmade sign with bright red Hebrew letters that asked: “Why are we still protesting expulsion?” “I think it’s really important for us to show support for the people who are at risk of being expelled from their homes,” he said. “I think it’s a human rights crisis, and I can’t just sit at home and watch the news and not do anything.”Noting that the situation makes him “feel powerless,” Friedman said he felt compelled to express himself through peaceful protest.“I came here to show support for the people of Amona. But I think, more importantly, that Amona is a symbol of all the Jewish communities in Israel, not just in Judea and Samaria,” he said. “And if one Jew can be thrown out of [his] home, then all of us can be thrown out of our homes, and I’m sick of it. We’ve seen Jews expelled from all over the world, and now we come back to our homeland and we continue to expel ourselves from our own homes. I think it’s insane, and that we need to wake up and express ourselves to the government, or they’re going to do whatever they want with us.”Daniel Luria, executive director of Ateret Kohanim, a right-wing NGO that helps Jews facilitate legal purchases of residential Arab properties in east Jerusalem, described the situation as “absurd.”“First of all, it’s about time we stood up to the Supreme Court, but also the world, to let them know and understand that the Land of Israel belongs to the Jewish people,” he said. “This whole concept of ‘two states for two peoples’ – that we should compromise our homeland – is absurd.”Moreover, Luria cited what he deemed “the sheer hypocrisy” of the Palestinian Al-Quds University in Abu Dis being partially situated on Jewish land.“Without a doubt, 60% of it is on tribally owned Jewish land,” he said. “There’s land all over the place where Arabs are illegally squatting, and I don’t see the court jumping up and down, or enforcing evictions, or making sure the homes are destroyed.”Pearle Bechet, a Jerusalem pensioner who emigrated from France six years ago, became emotional while discussing her anger at the court’s controversial decision.“I came here because I am with those people – I am with Amona, because [the court] only wants to displace Jews,” she said. “There is so much illegal Arab construction and they don’t move. So I would like them to move them too instead of just displacing Jews. I understand that Bibi [Prime Minister Benjamin Netanyahu] is under pressure all the time, and we can’t imagine what kind of pressure he has, but he must not give up one meter of our land to our enemy. Our enemy only understands force.”Hillel Frenkel, age 17, said he attended the protest with several classmates from Kfar Saba.“These are Jewish homes and Jewish people who are part of our nation, so it’s not good to destroy the houses,” he said. “Hashem [God] gave it to us. It is Jewish land, and the Arabs are not supposed to live here.”Pesach, a 38-year-old biologist from Ashdod who asked that his last name not be published, brought his 12-year-old son to the demonstration.“We came to protest the idea that you can move Jews from any place in Israel, because it is wrong,” he said. “It is the wrong cause to the Jewish people, and the wrong cause to God, because every time Jews leave their land, a war follows.”Asked why he came with his father to the demonstration, the son replied, “Am Yisrael chai,” (“The people of Israel live.”)