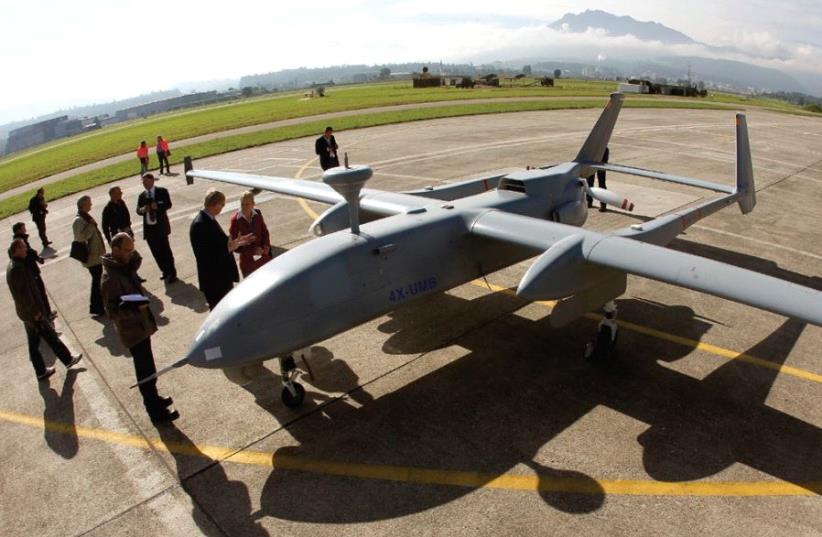 AN IAI HERON stands on the tarmac during a media presentation in Emmen, Switzerland, in 2012
(photo credit: REUTERS)
Advertisement
Two years after buying its first armed Heron unmanned aerial vehicles from Israel, India might be receiving them ahead of Prime Minister Narendra Modi’s visit this summer.According to India’s Economic Times, 10 Heron TP-armed drones bought in September 2015 at a cost of $400 million are ready to be delivered to New Delhi once a final payment is completed.The Heron TPs are Israel Aerospace Industries’s most advanced UAVs with a 40-hour endurance, maximum takeoff weight of 5,300 kg. and a payload of 1,000 kg., according to the Times. They can be used for both reconnaissance as well as combat and support roles, and can carry air-to-ground missiles to take out hostile targets.
India and Israel agree to join forces to fight terror as Rivlin and Modi meet
At the AeroIndia show in Bangalore in February, IAI introduced their Long-Range Long-Endurance Heron TP-XP.Heron TP-XP constitutes a multi-mission, multi-payload strategic aircraft, the company said, and it is a special export version of the Heron TP, which has been used by the Israel Air Force since 2010.While IAI’s export Heron TP variant is almost identical to the company’s domestic version, the export variant carries a 450-kg. payload in order to allow members of the Missile Technology Control Regime (MTCR) to procure the UAV.While Israel is not a member of MTCR, which aims to restrict the proliferation of missile technology, India joined in June of last year.Israel has agreed to only export strategic weapons systems to member countries.The Indian Air Force already operates close to 180 Israeli- made UAVs, including 108 IAI-made Searchers and 68 unarmed Heron 1s for surveillance and intelligence gathering, as well as a fleet of IAI-produced Harpy UAVs, which carry a high-explosive warhead and self-destructs to take out targets such as radar stations.“India is one of IAI’s leading markets,” IAI president and CEO Joseph Weiss said in January.“This important market is characterized by long-term collaboration, joint development and production, technology transfer and technical support over many years.”According to foreign media reports, Israel is considered a leading exporter of UAVs, with IAI and Elbit selling them to Chile, Colombia, France, Germany, India, Mexico and Singapore, among others.As part of their role in the UN peacekeeping mission in Mali, Germany signed a $100 million deal with Airbus Defense and Space to lease three Heron in July. The German air force has been operating the Heron in Afghanistan since 2010, where they were involved in thousands of missions, accumulating over 27,000 flight hours.And while the Israeli-made UAVs in Mali will be used solely for surveillance and intelligence gathering, in early March, Singapore’s Defense Ministry marked the full operational capability for its military’s first Heron 1 unmanned aerial vehicle, which Singapore Defense Minister Dr. Ng Eng Hen said “could be deployed against terrorist threats.”