Israel down to 5th worldwide in per capita patents

The biggest Israeli advantage in 2000-2018 is in medical devices, followed by drugs, communications and software. 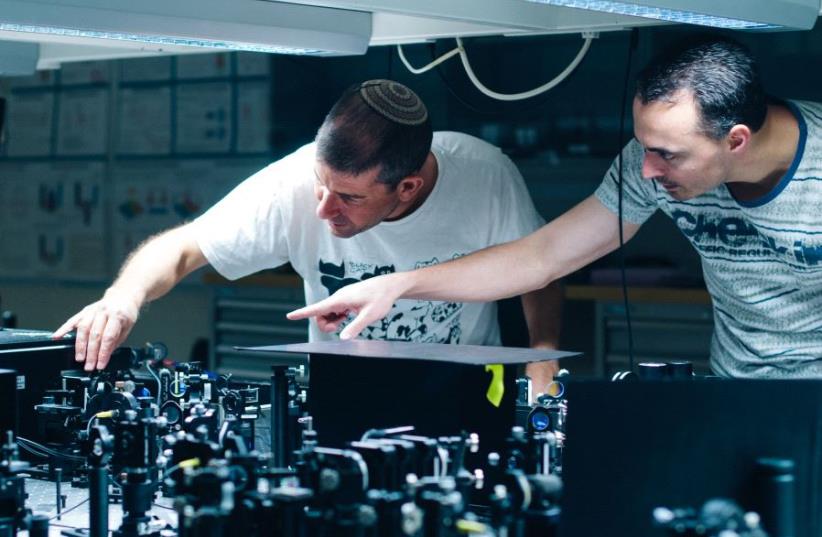 Prof. Hagai Eisenberg and graduate student Daniel Istrati study a single photon experiment at the Hebrew University's Quantum Information Science Center
(photo credit: YITZ WOOLF FOR HEBREW UNIVERSITY)
Advertisement
Israel has been one of the leading countries in the past eighteen years in terms of number of international patents filed via the Patent Cooperation Treaty (PCT) in relation to population size. The peak came in 2000, when Israel was ranked third in the world for patents filed per capita according to the country of the inventor, after Finland and Sweden. Today, Israel is fifth, after Japan, Sweden, Switzerland and South Korea. Finland has dropped to sixth. The data are from a new report by the National Council for Research and Development in the Ministry of Science and Technology.A local record for number of patents filed came in 2007, but immediately following the global financial crisis of 2007-2008 the number of international patents filed declined. In the past few years the trend has reversed again and the number of patents filed is rising.The report was prepared for the ministry by researchers at the Samuel Neaman Institute for National Policy Research: Dr. Eran Leck, Dr. Daphne Getz, and Ilia Zatcovetsky. It examines patents filed under the PCT, that is, patents intended to protect an invention in the international market, and it strengthens the findings of a previous report compiled by the Samuel Neaman Institute for the Ministry of Science and Technology on scientific publications. As in patents, Israel's standing in scientific papers published is very high, but its advantage is receding as other countries come to the fore.The ranking of patents filed per capita according to the country of the inventor includes patents filed by international companies and universities where Israelis work. In the ranking of number of patents filed per capita according to the country of the filer (which could be an individual, an academic institution, or a commercial company), Israel was fourth in 2000 (after the Netherlands, Sweden, Switzerland and Finland), and is currently ranked eighth (having been overtaken by Japan, South Korea, Denmark, and Germany). These are OECD figures, and for most of the years in question they do not include China.Israel National Council for Research and Development chairperson Prof. Daniel Hershkowitz said, "Israel occupies a place of honor in patent registration in the world, but in order to preserve and strengthen the trend, we have to bolster the transfer of knowledge between higher education and industry, increase the number of researchers in research institutions, and strengthen information commercialization companies at the universities, which are such a fertile field for registering patents originating in Israel."The report maps the areas of relative specialty for various OECD countries. It shows that Israel has above an average specialty in almost all of the fields examined. The biggest Israeli advantage in 2000-2018 is in medical devices, followed by drugs, communications, and software, while Israel is now only average in nanotechnology in the level of its inventions (the leading countries in this area are Spain and New Zealand). Israeli is below the OECD creativity average in one area: the environment and environmentally friendly technologies. The leader in this area, Denmark, also leads in biotechnology.Israelis are very inventive according to all of these measures, but the differences between the figures for patents with an Israeli inventor and patents with Israel ownership shows that Israelis are often inventors in the service of foreigners. According to the report, 30% of the Israeli patents are under foreign ownership. This is not necessarily a negative thing - foreign or international companies pay well for Israeli brains.Israeli ownership of foreign inventions, on the other hand, amounted to 9.7% in 2015. This figure, which has been fairly stable over the past decade, is rather low by international comparison. Among other things, it reflects the low number of Israeli-owned multinational companies, compared with countries of similar size, such as Switzerland, Belgium, Sweden, and Ireland which own relatively many international companies.Facebook is the leader in IsraelThe report also examined patents filed in the Israel Patent Office. Patients are usually filed in Israel after the international stage by companies interested in operating specifically in this market. 2007 was the peak year for patent filing in the Israeli market and the number of patents filed fell by 16% between that year and 2016. Most patents filed at the Israel Patent Office were by foreign concerns seeking to operate in Israel (88%); the remaining 12% were by Israelis: both those who filed an international patent and then wanted to do it in Israel and those who wanted to operate only in the local market. In recent years, the number of patents filed by Israelis in Israel has decreased. It appears that Israeli inventors think first of all about overseas.The companies that filed the most patents in recent years (companies operating in the local market or interested in in forestalling competitors in the global market) are Facebook, Dow AgroSciences (fertilizers and seeds for agriculture), Philip Morris (tobacco), Raytheon (military and defense products), and pharma companies (Novartis, Hoffman-La Roche, and Pfizer) competing with Israeli company Teva Pharmaceutical Industries Ltd. (NYSE: TEVA; TASE: TEVA).Minister of Science and Technology Ofir Akunis said, "Israeli brains are in great demand throughout the world. There is a good reason why global companies have established their research and development centers here. Support for bringing Israeli scientists back to Israel and fostering Israel's scientific reserves starting at school edge will preserve Israel's status in this area, too."© Copyright of Globes Publisher Itonut (1983) Ltd. 2018