"They didn't have to kill him," says Jewish man who knew Mahdi al-Saadi. 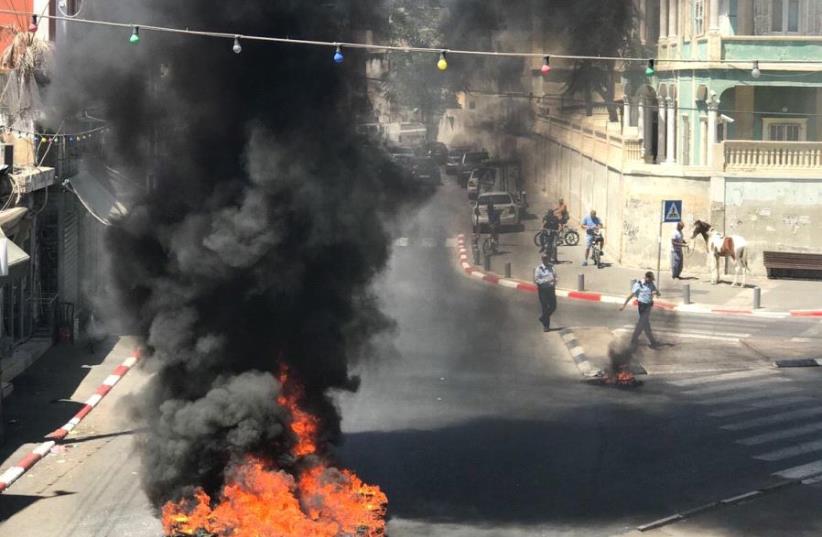 Protestors burn tires during clashes with police in Jaffa, July 29, 2017.
(photo credit: SOCIAL MEDIA)
Advertisement
The intersection of Jaffa’s Yefet Street and Haj Kahil junction, where Saturday’s police shooting of a young Arab man set off sustained rioting, is normally a model of peaceful coexistence.Lined by modest shops, cafés and restaurants manned by Jewish and Arab workers who interact like friendly neighbors, residents of the integrated coastal neighborhood say violence of any kind is a rarity.Therefore, when Mahdi al-Saadi, 22, was shot six times by police shortly after midnight, the reaction was collective shock, followed by rage at what many described as excessive force.While police contend that Saadi and an unidentified friend shot at officers during a chase after fleeing a nearby port before being fired on, moderately wounding his friend, residents claim that both suspects were unarmed.Moreover, during conversations with The Jerusalem Post on Monday, they assert that all surveillance footage proving it was removed by police following the shooting.“It is normally peaceful here, but people rioted because this was the first time we had a shooting like this, and they said the boy was not armed and [the police] still shot him at close range six times,” said Laila Kaboub, owner of Laila Fine Jewelry, located a few meters from the shooting.“If they wanted to stop and arrest him, they could have shot him in the legs.”She continued: “They took surveillance footage from all the stores and came here and asked for mine, but I only have footage of the interior of the shop. But if he was armed, then why don’t they show the public the evidence to prove it?” Kaboub answered: “Because he was not armed.”Additionally, Kaboub claimed that Saadi did not flee police from the port because of illegal possession of a gun, but rather for driving with a suspended license.“He didn’t run away because he fired shots, it was because he rode his motorcycle after his license was taken away from him,” she said.In a Sunday interview with Army Radio, Saadi’s father, Jamal, further fueled speculation of foul play when he said his son was unarmed and shot “in cold blood.”The rioting, which took place after the shooting and resumed hours later following Saadi’s funeral, was quickly contained by police.No one was injured, and at least eight suspects were arrested.Jewish resident Avi Ohaion, who has lived and worked in the neighborhood since 1969, said he knew Saadi since he was a child, and described him as “a good boy.”He added that he has never had a problem with his Arab neighbors, but understood why they became violent after the shooting.“The police are professionals and could have shot him in the leg and arrested him instead of shooting him in the neck and upper body six times,” he said. “They didn’t have to kill him. He [Saadi] came to my clothing store just two days before the shooting. I knew him and his father. They are good people.”Mahmoud, a 33-year-old resident of the neighborhood who requested his last name not be published, also asserted that Saadi was unarmed when he was shot, adding that police are attempting to orchestrate a cover-up.“It’s not true what the police said; he did not have a gun,” said Mahmoud.“Everyone is angry because they know he didn’t have a gun and they killed him anyway. We have a lot of cameras here, and if [the footage of the shooting] is shown it will prove the police are lying.”Asked if there was preexisting tension between Arabs and police in the community, Mahmoud responded, “No, we almost never have problems with them here.This was unusual. It’s not normal to kill someone in Jaffa and Tel Aviv.”He continued: “Here we live a very good life with Jews and the police. The problem is with the policeman who shot him. He must turn himself in.”Khalil Abu Shmes, 38, echoed Mahmoud’s sentiments.“They shot to kill, and they could have shot at his leg,” he said. “Then they took all the footage of the shooting so no one can see the truth.”An investigation into the shooting has been opened by the Justice Ministry’s Police Investigations Department