Attempts have been made to try and bridge the divide between the two sides, but they have so far failed and the plan has in effect been frozen. 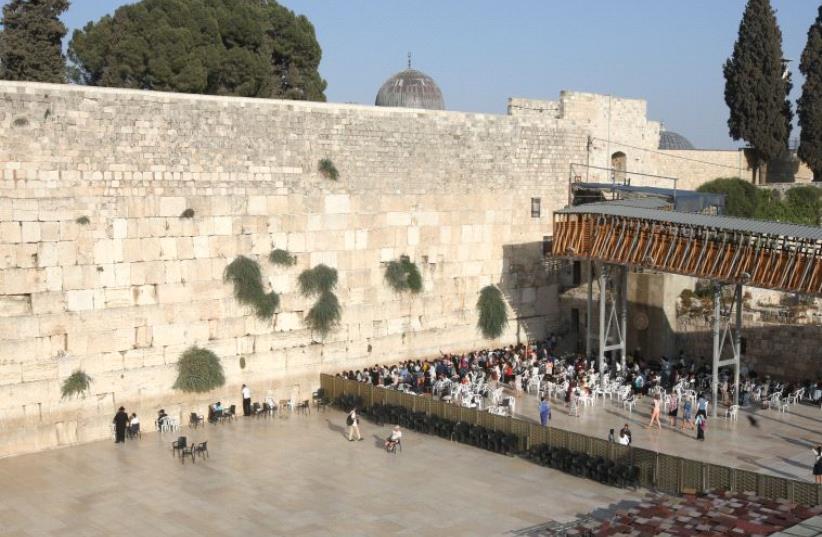 Western Wall
(photo credit: MARC ISRAEL SELLEM)
Advertisement
A staged or gradual implementation of the Western Wall agreement now seems the most likely way forward, outside of High Court intervention, for the plan to create an egalitarian section at the southern end of the holy site, it has emerged.Speaking to The Jerusalem Post for its special magazine edition this coming Friday, Jewish Federations of North America president and CEO Jerry Silverman and Jewish Agency chairman Natan Sharansky both indicated that a staggered form of implementation now looks like the best way to achieve the goal.Although the government approved a resolution to create a large, state-recognized prayer section for egalitarian prayer at the Robinson’s Arch area of the Western Wall in January, implementation of the agreement has been frozen due to fierce haredi objections to the plan.Attempts have been made to try and bridge the divide between the two sides, but they have so far failed and the plan has in effect been frozen.The Prime Minister’s Office has, however, indicated that it is willing to begin work on the physical requirements of the pluralist prayer section and that aspects of the plan can begin to be implemented.Silverman told the Post that following meetings he conducted in Israel last week, he believes “staged implementation” is being seriously considered.“While issues to move forward are being examined, it may make sense to have staged implementation so that you begin to get facts on the ground in order to move forward,” said Silverman, adding that such a process would have to include every aspect of the original plan and have a clear timeline.He said this would, however, require agreement from the Reform and Conservative Jewish denominations, but staged implementation is a possibility and could even begin shortly after the coming holiday season.Sharansky made similar remarks, saying implementing what is possible right now could be the most practical step forward.He insisted, however, that such steps be taken only if the current status quo, whereby the Women of the Wall maintain their right to pray at the central Western Wall plaza, be preserved until the entire plan is implemented.Under the terms of the cabinet decision approved in January, the central Western Wall plaza would be designated solely for Orthodox prayer, and the Women of the Wall movement would agree to move their prayer services to the new egalitarian space.The full interviews with Sharansky, Silverman and others will be printed in this week’s magazine on Friday.The Reform and Masorti (Conservative) Movements in Israel have strongly objected to the notion of partial implementation, while opposition has also been expressed to staged implementation.Masorti Movement in Israel director Yizhar Hess told the Post on Wednesday that the Masorti leadership had informed the Prime Minister’s Office that “we are not prepared in anyway [to accept] partial, gradual implementation, which will only be a mask for continued foot-dragging and a disavowal of the Western Wall agreement.”Rabbi Gilad Kariv, director of the Reform Movement in Israel, said gradual implementation would only ever be partial implementation and would demonstrate that the government does not know how to implement the full agreement.While partial or gradual implementation is being considered by the Prime Minister’s Office as a way out of the impasse, the High Court of Justice strongly indicated earlier this week that it may intervene if no progress on implementation is made.The justices, including Supreme Court President Miriam Naor and Deputy President Elyakim Rubinstein, told the Reform and Masorti petitioners against the Western Wall Heritage Foundation to refocus their petition on the government’s failure to implement the January resolution.Kariv said the movements would argue in their amended petition both that the government has obligated itself to implement the original agreement and that the state is required under the terms of the Law for the Protection of the Holy Places to grant access and prayer rights to all worshipers at Jewish holy sites.This latter argument is being deployed out of a fear that should the High Court order the government to implement the resolution, the haredi political parties will simply pressure the government to repeal the resolution.According to Kariv, such efforts began almost as soon as the agreement was approved in January, and he believes they will be stepped up again after the amended petition is filed.