Archeologists uncovered his name – Gargilius Antiques – engraved on a massive rectangular stone, during a maritime excavation at the Tel Dor archeological site south of Haifa. 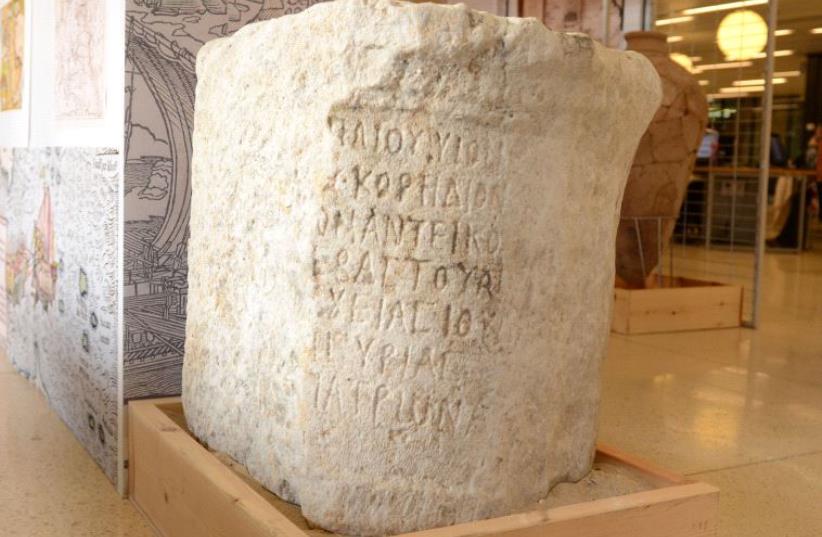 Ancient script engraved on a massive rectangular stone, from the Bar-Kochba period ‏
(photo credit: JENNY CARMEL)
Advertisement
In a rare underwater discovery, researchers from the University of Haifa have determined with certainty the name of the Roman procurator who ruled in Judea prior to the second- century Bar-Kochba Revolt.Archeologists uncovered his name – Gargilius Antiques – engraved on a massive rectangular stone, during a maritime excavation at the Tel Dor archeological site south of Haifa.The 85-cm. stone bearing Antiques’s name weighed in at over 600 kg., requiring a complicated engineering operation for removal, the university said.“Not only did we manage to identify with certainty for the first time the name of the procurator that controlled Judea during the critical years before the Bar-Kochba Revolt, but this is only the second time that a reference to the name Judea was revealed in any inscription from the Roman period,” Prof. Assaf Yasur-Landau and Dr. Gil Gambash said in a joint statement.Ancient script engraved on a massive rectangular stone, from the Bar-Kochba period ‏ (photo credit: EHUD ERKIN SHALEV)Yasur-Landau managed the underwater excavation, while Gambash, the head of the Maritime Civilizations Department, helped in deciphering the inscription.The Bar-Kochba Revolt, which followed the rule of Gargilius Antiques, occurred from 132-136 CE, and was also known as the Third Jewish Revolt. Led by Shimon Bar-Kochba, the Jews were able to temporarily capture key Roman strongholds, including Jerusalem. Ultimately, the Jewish forces collapsed after a final battle in Betar, Bar-Kochba’s headquarters.The Tel Dor coastal site, associated with the biblical era, operated until about the fourth century CE, according to the researchers. While excavation has been occurring there since the first half of the 20th century, Dr. Ayelet Gilboa of the University of Haifa and Prof. Ilan Sharon of the Hebrew University of Jerusalem took the lead in 2003 – later to be joined by Prof. S. Rebecca Martin of Boston University and Yasur-Landau.A number of artifacts have been uncovered over the years at Tel Dor, including anchors, pottery and other relics from the time period. Yet in January, students from the University of Haifa lab of Ehud Arkin Shalev came across the giant rectangular stone and could already see an inscription etched on their find, a statement from the university said.In consultation with Kobi Sharvit, head of the Antiquities Authority’s Marine Archeology Unit, and Yigal Ben-Ari of the Israel Nature and Parks Authority, the archeologists decided to move forward with a complex extraction mission, the statement continued. After removing the giant stone, they found the revealing seven- line Greek inscription.“Apparently, this was the base of a statue from Roman times and to the best of our knowledge, this is the longest inscription ever discovered underwater in Israel,” Yasur-Landau said.While the deciphering work on the inscription, led by Gambash, is still not complete, the information acquired thus far is already proving significant to the archeologists.The Antiques name was once found on a similar inscription about 70 years ago, but the portion of that inscription that would have indicated over which province he ruled was not preserved, according to the researchers. Scholars had debated whether Antiques might have been the procurator of the Syrian province rather than Judea, but the new rectangular stone has now clarified his identity – as ruler of Judea in 131 CE, just before the outbreak of the Bar-Kochba uprising.The researchers also emphasized the unique nature of the fact that Judea was even mentioned in a Roman inscription, as such a reference has only been found in one other relic – a stone commemorating Pontius Pilate in Caesarea, they explained.“Immediately after suppressing the Bar-Kochba Revolt, Rome decided to abolish the province of Judea, and erase all traces of its name, and as a result decided to connect it to Syria to create the province of Syria Palaestina,” the researchers said. “So we see an inscription that dates back to very shortly before Judea essentially ceased existing as a province with this name. Out of the two inscriptions that mention the name Judea, this is of course the later one, but in light of its rarity, it is reasonable to assume that few other inscriptions with the name Judea from later on will be found.”Members of the public can now view the inscription in a new exhibit that opened on Wednesday at the University of Haifa’s Younes and Soraia Nazarian Library.