Mizrachi to kick off celebration of Jerusalem’s jubilee 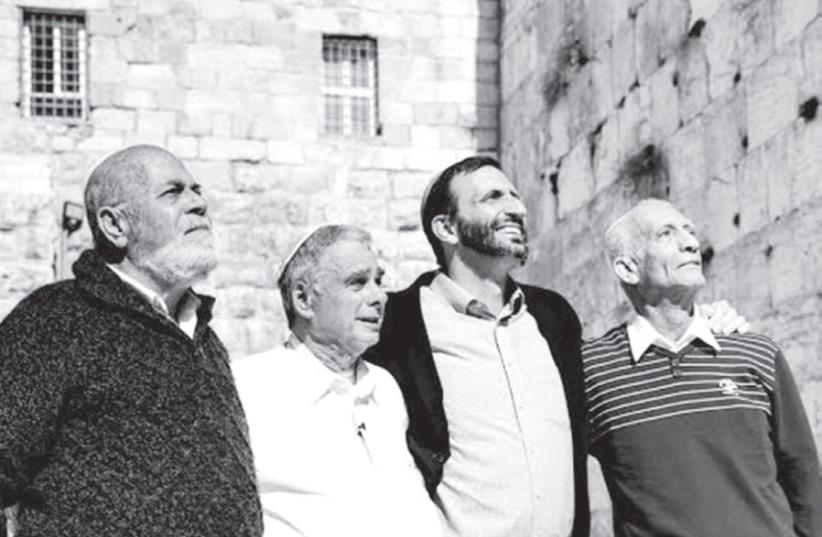 THE THREE iconic paratroopers from David Rubinger’s Six Day War photo pose with World Mizrachi CEO Rabbi Doron Perez at the Western Wall
(photo credit: WORLD MIZRACHI)
Advertisement
More than 3,000 people from around the world are set to participate in a four-day “mega mission” beginning Monday to celebrate 50 years since the reunification of Jerusalem under Israeli control.Jerusalem Day is largely celebrated by the national- religious sector, with events spearheaded by the World Mizrachi movement – an umbrella organization for religious Zionists in Israel and around the world.Members from their chapters have traveled to Israel from the US, Canada, Mexico, Costa Rica, Columbia, Gibraltar, Spain, the UK, South Africa and Australia to attend. The opening ceremony Monday evening will feature Education and Diaspora Affairs Minister Naftali Bennett, former UK Chief Rabbi Lord Jonathan Sacks and Ashkenazi Chief Rabbi David Lau.“The aim is to try to bring as many people from Mizrachi communities to celebrate this milestone together,” World Mizrachi Movement CEO Rabbi Doron Perez told The Jerusalem Post.Responding to claims that the national-religious sector has effectively “taken over” Jerusalem Day and politicized the day, he noted that while the vast majority of the participants are affiliated to World Mizrachi, they come from both the Right and the Left.“I think it is a pity that Jerusalem Day isn’t as celebrated as widespread as it could be,” Doron said, noting the lesser involvement of both the ultra-Orthodox and the secular.“Certainly this day doesn’t belong to us,” he said. “It was instituted by the Chief Rabbinate as a day of thanksgiving, and we hope and pray that more people embrace it.” He emphasized that the celebration focuses on spiritual reflection and gratitude.Asked about the preemptive calls by left-wing organizations to Jerusalem Day revelers to avoid provoking Arab residents by marching through the Muslim Quarter, a representative of the movement made clear that Mizrachi participants will not be walking through Damascus Gate.Over the years, Jerusalem Day has been tarnished by racism, drawing left-wing counter protests.“I can say unequivocally that any provocation of any citizen of Jerusalem, Jew or non-Jew, Muslim or Christian, is absolutely antithetical to core basic Jewish values and we would totally distance ourselves from it,” Perez said, adding that such incidents are not relevant to Mizrachi participants and admitting that he was not even aware of such provocations.The rabbi stressed that the group aims to celebrate in accordance with the principles of derech eretz (basic decency).In addition to the Mizrachi activities, the World Zionist Organization is running its own initiative, called L’chaim Yerushalayim, bringing young Jewish adults from across the world to participate in Jerusalem Day celebrations.While the WZO program is aimed at people between the ages of 18-30, the Mizrachi conference is for all ages, spanning from the 50 high school students who are attending to a 97-yearold participant.Some 1,200 of the participants are from the Diaspora, and they include volunteers who came to Israel to help out on kibbutzim in 1967, filling in for the kibbutz residents fighting in reserve duty during the Six Day War. These include a group of 70 former Bnei Akiva students from South Africa.The opening event will honor the volunteers as well as lone soldiers who continue to move to Israel from the Diaspora in order to serve in the IDF today.Perez noted that the movement today is facing a challenge due to the many core members of Diaspora communities who have made aliya. “We are proud of this but it had depleted a lot of the Diaspora communities” he said, explaining that it can leave those who remain there feeling lost.While the focus of the movement continues to be on Israel, Perez said, there also needs to be responsibility for the Diaspora communities and an ongoing effort to connect them to Israel and the global Zionist modern Orthodox movement, “which is dynamic, interconnected and working together.”World Mizrachi sees Jerusalem Day as an opportunity to present a global revitalization of its organization.According to Perez, this week will be the first time that so many members of the movement will come together to celebrate Jerusalem Day, which he described as “tapping into the power of Jerusalem” to unite people, with an emphasis on World Mizrachi’s twin values of religious spiritual identity and Jewish national identity.Perez stresses the importance of this amid efforts to delegitimize Israel. Having served as the rabbi of the South African Mizrachi community for 15 years, in a country where the Boycott, Divestment and Sanctions movement against Israel has a presence, Perez said he often heard statements that Israel and Zionism are not inherently connected to Judaism.“Our main raison d’être – especially with the challenges facing Israel today – is that many try to separate between being a Jew and having a connection to the land of Israel,” he said. “And for us, those two are absolutely integral.”