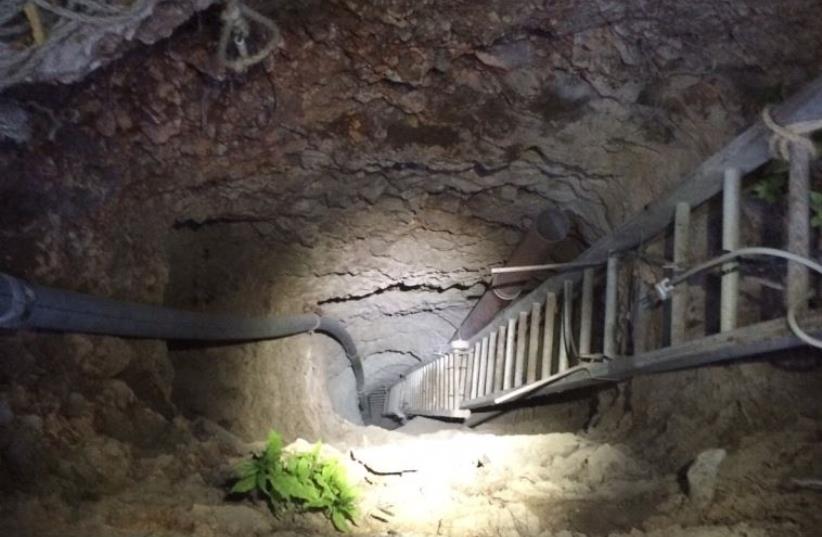 AN IMAGE of the east Jerusalem tunnel discovered by police.
(photo credit: JERUSALEM POLICE)
Advertisement
Jerusalem police are investigating a suspicious 30-meter shaft possibly dug by con men from an elderly Palestinian woman’s east Jerusalem property near the capital’s Rockefeller Museum.Police spokesman Micky Rosenfeld said on Tuesday that a concerned neighbor of the woman contacted authorities on Monday to report that unidentified men had been digging a deep hole for several weeks in the woman’s garden, located just outside the Old City’s walls.“The elderly lady said the suspects told her that they were working on behalf of the municipality and electric company to fix pipes and other things,” said Rosenfeld.“Every time she asked them what they were doing, they replied ‘fixing, fixing, fixing.’” Upon inspecting the shaft, Rosenfeld said police found a ladder, lighting, and digging equipment.“Police are searching for the suspects to determine what’s behind this,” he said, noting that no arrests have been made. “[The men] have not returned since officers inspected the shaft on Monday.”Rosenfeld said that no stolen antiquities were found in the shaft and that the museum had not reported a breach.While an Antiquities Authority official said the likelihood of the shaft being used to steal from the museum is remote, inspectors from the authority are working with police and the municipality to investigate its purpose.Excavations in areas in and around the Old City without the supervision of the authority are strictly prohibited by law, and can result in a fiveyear prison sentence, according to the Antiquities Authority’s Theft Prevention Unit.The Rockefeller Museum, built in 1938, houses a rare collection of antiquities unearthed in excavations conducted primarily during the time of the British Mandate, between 1919-1948.The museum also has relics from the Ottoman period, a 9,000-year-old statue from Jericho, gold jewelry from the Bronze Age, and many more artifacts from around the country.