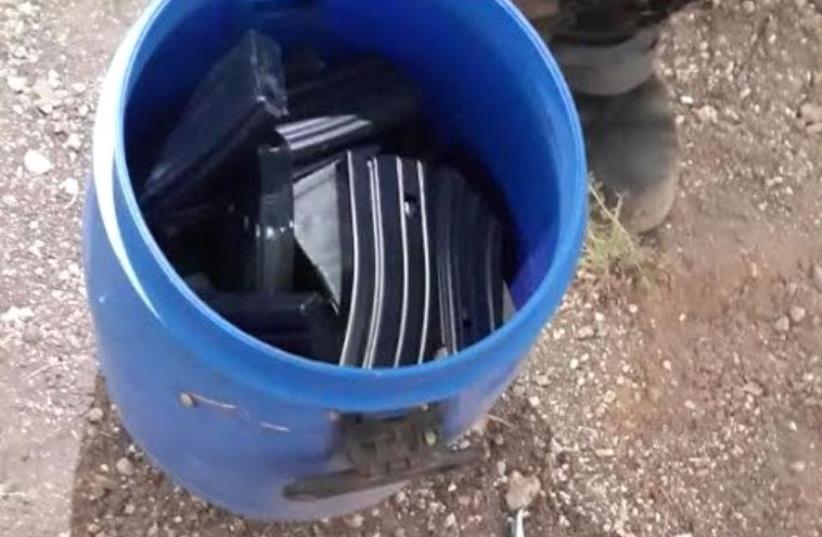 Police uncover large weapons and ammunition cache in Shfaram.
(photo credit: ISRAEL POLICE)
As part of a larger police effort to combat the illegal weapons trade, police uncovered a large ammunition cache in Shfaram, a mixed city of Christians, Muslims, and Druse, with a population of around 40,000 in northern Israel.Identified in the cache were 40mm grenades meant for a M203 grenade launcher, a stun grenades, over 5,000 rounds of 5.56mm ammunition, 80 cartridges, 9mm Uzi cartridges, over 600 rounds of 9mm ammunition, bulletproof vests, and combat gear.With the help of a special forensics and explosives units and a K-9 unit the police were able to locate a trapdoor, which hid the weapons and ammunition, in an open area of Shfaram.The police have been targeting Israel’s illegal weapons trade especially focusing on Israeli-Arab regions. In mid-July some 600 police officers arrested 63 persons in the Israeli-Arab regions of the Triangle, for illegal weapons and drug trafficking after a yearlong undercover sting operation.At the conclusion of the operation, Insp. Gen Roni Alsheikh stated that police are seeking to improve relations with Israeli-Arab communities. “The police are in the midst of a broad initiative to enhance public trust and confidence in Arab society at all aspects of police and law enforcement,” he stated.According to 2015 police figures, 59 percent of murders in the country take place in the Arab sector even though Arab-Israelis only make up 21% of the population. While the country’s Arab sector has long been saturated with illegal firearms, the issue of unlicensed guns reached a new level of national attention when Nashat Milhem went on a shooting spree in central Tel Aviv last January.In March of this year, the government budgeted NIS 2 billion over the next five years towards policing in Arab communities.