And the catalyst of change is US President-elect Donald Trump. 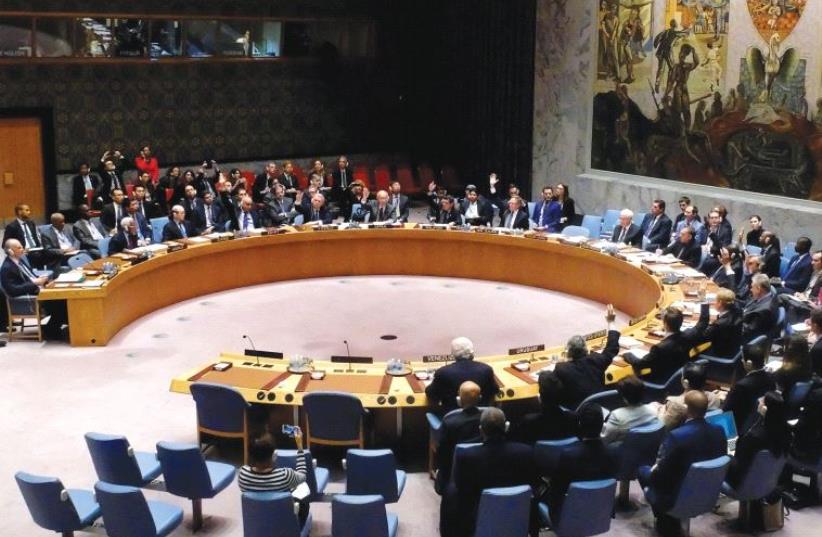 THE UNITED NATIONS Security Council votes in October on a draft resolution demanding an immediate end to air strikes on the Syrian city of Aleppo.
(photo credit: REUTERS)
It’s a new day.Egypt’s 11th-hour decision to pull back its anti-settlement resolution at the UN Security Council on Thursday demonstrates that what was is definitely not what will be from now on in the Middle East diplomatic process.And the catalyst of change is US President-elect Donald Trump.Amid all the head-scratching and speculation early Thursday regarding whether President Barack Obama would use the US veto to protect Israel from a UN resolution calling for a clear distinction between the Jewish state and the territories, Trump released the following statement.“The resolution being considered at the United Nations Security Council regarding Israel should be vetoed. As the United States has long maintained, peace between the Israelis and the Palestinians will only come through direct negotiations between the parties, and not through the imposition of terms by the United Nations. This puts Israel in a very poor negotiating position and is extremely unfair to all Israelis,” he said.While it was not clear whether this message would matter at all to Obama, it does matter to Egyptian President Abdel Fattah al-Sisi, who will have to work with Trump for the next four years. Obama already pushed through this week one regulation he knew Trump would oppose – a ban on offshore drilling in the US-controlled Arctic and Atlantic seaboard – and there was no reason to believe he would not do the same on this resolution.But Sisi has a different set of considerations.Sisi, like Netanyahu, met both Trump and his Democratic rival Hillary Clinton in September, before the election. Unlike Netanyahu, however, he did not hide his preference for Trump, and in interviews after those meetings made clear he supported Trump. Sisi was the first international leader to call and congratulate the president-elect after his victory, and said he hoped the victory would breathe new life into the Egyptian-American relationship.Ties between the two countries were strained as a result of what Sisi viewed as Obama’s support for the Muslim Brotherhood, and because of Washington’s criticism of Sisi’s human rights record. With Trump, Sisi sees the possibility of turning a new page with Washington, and it is clear that following Trump’s statement on the UN resolution on Thursday – and likely messages he received from the Trump team – he realized this would not be the best way to begin afresh.There are some who are saying that the Egyptian change of mind had more to do with pressure coming from Israel. This is highly unlikely.Does anyone really believe that Sisi did not realize before spearheading and introducing this resolution that it would infuriate Prime Minister Benjamin Netanyahu? Sisi obviously knew in advance what Jerusalem’s reaction would be. But since when does Egypt forgo promoting anti-Israel resolutions in international forums because of a fear of Israeli displeasure? In 2014 and 2015, Egypt was behind unsuccessful resolutions at the International Atomic Energy Agency that would have forced Israel to open its nuclear sites to international inspection, a resolution far more inimical to Israel’s real interests than an anti-settlement resolution without any real teeth in the Security Council.Some critics are using the very fact that Sisi put forward this proposal as proof that Netanyahu’s claim of strong ties with Egypt, Jordan and other Arab states is hollow. If the ties are so great, why would Egypt push forward such a resolution? But the ties are indeed strong. On security and intelligence matters, the two countries are coordinating and cooperating to an unprecedented degree. Not because they love each other, but because they need each other, to deal with common threats: combating Iranian expansion in the region, preventing Islamic State inroads in northern Sinai and fighting Hamas/Muslim Brotherhood.But Egypt has other interests as well. Sisi still needs to placate a domestic constituency which likes to see it take the lead on the Palestinian issue, and Egypt uses this issue – and its role in trying to solve it – as a way to cement its status as a leader in the Arab world.In Sisi’s calculations, he could afford to irritate Netanyahu with this UN resolution, knowing that because Israeli-Egyptian cooperation is so important to Israel, Netanyahu would not reciprocate by curtailing Israeli-Egyptian coordination.But he also had a different calculation: Is this an issue over which it is worth irritating Trump, quite possibly getting their relationship immediately off on the wrong foot? By pulling back the resolution, he gave the world his answer. And it is an answer that shows that even before the president-elect takes office, some of the basic assumptions in the Middle East have already started to shift.