The West Bank is under Israeli military rule, which effectively means it is under Liberman’s rule. 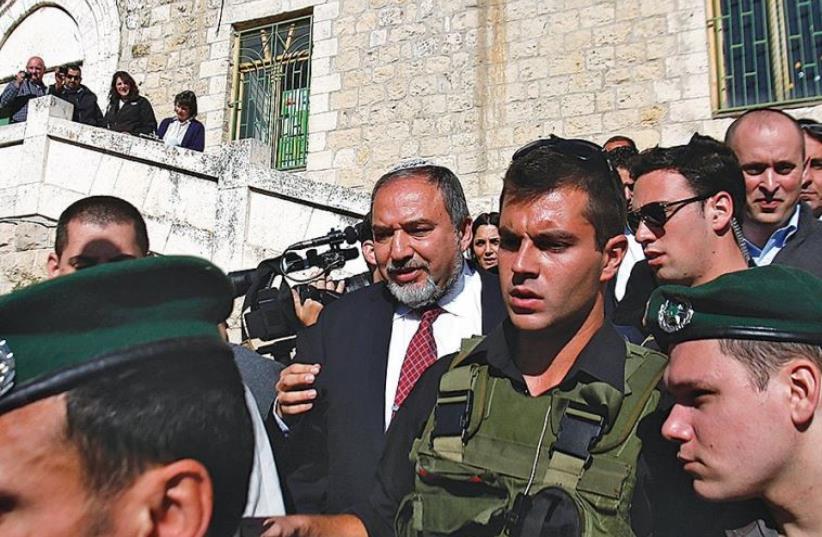 THEN-FOREIGN MINISTER Avigdor Liberman visits Hebron in January 2013
(photo credit: REUTERS)
Advertisement
Avigdor Liberman’s new job as defense minister places him in charge of the West Bank.The West Bank is under Israeli military rule, which effectively means it is under Liberman’s rule.For those who are concerned about the appointment, this is one of the aspects of his new job that should concern them.Many of the doomsday analysts who have panicked in the last 24 hours have done so for the wrong reasons.Those who worried about what this appointment means for the right-wing character of Prime Minister Benjamin Netanyahu’s government, or even Israel’s diplomatic image, can relax. This is not Liberman’s first high-level ministerial role.He was, after all, Netanyahu’s foreign minister, and as such was in charge of diplomatic relations from 2009 to 2015 – a fairly hefty chunk of time.Just after he delivered his first speech upon taking office, political pundits speculated that he had set diplomacy in the country back 25 years.Yet Liberman held one of the longest-serving tenures in that office in more than three decades. His term is rarely listed as one of the reasons Israeli-Palestinian negotiations were not renewed under Netanyahu.When it comes to casting blame, Israelis hold the Palestinians liable for the failure of the two significant diplomatic pushes to jump-start the negotiations – the 10-month moratorium on settler building starts in 2009 and 2010 and the nine-month US-led peace process that fell apart in April 2014.The Palestinians and the international community in turn have blamed Netanyahu for the breakdown of those initiatives and in fact, the absence of any peace process.When it comes to sparking diplomatic crises, Netanyahu has a pretty good track record.After that, if anything, it was Defense Minister Moshe Ya’alon’s 2014 comments about US Secretary of State John Kerry as “obsessive” and “messianic” that made him for a brief time persona non grata in Washington.When Israeli politicians from the Likud lampooned Kerry, Liberman appeared to be one of the few statesmen-like politicians on the Right, as he publicly thanked Kerry for all of his efforts toward peace.Western diplomats stationed in Israel, have surprisingly spoken in favor of Liberman, whom they found a dependable partner to work with, even if they disagreed with much of what he said.It is hard, therefore, to make the argument that Liberman’s very presence in the government, is a stumbling block to peace and would make it impossible for a peace process with the Palestinians to move forward.It is Liberman in the specific role of defense minister, however, that has the possibility to inflame the already tense situation with the Palestinians.His actions against Palestinians in the West Bank could trigger more violence, and any support he gives to increased settlement building would have an impact on the diplomatic sphere.While diplomatic relations have been frozen, in the West Bank, under the auspices of the IDF, Israelis and Palestinian officials continue to work together, including on security cooperations.Ya’alon worked to ease conditions for the Palestinians in the West Bank, going for a carrot and stick approach, improving life for civilians, but cracking down on terrorism.Ya’alon also developed a reputation as the “moral voice” of the IDF, for his condemnation of violence he believed to be excessive and wrong. He certainly weathered his fair share of criticism for IDF actions toward Palestinians, including home demolitions and the shooting deaths of Palestinian assailants.Still, he believed violence was eased by improving conditions for Palestinians in Area C, where the IDF is also in charge of civilian affairs.It is fitting that as one of his last acts in the Defense Ministry, Ya’alon approved measures to ease conditions for Palestinians at the crossings from Area C.Liberman, who has called for the ouster of Palestinian Authority President Mahmoud Abbas, will now be in charge of the only military body in the West Bank – one that has the authority to enter any Palestinian city.Similarly, he would have broad powers when it comes to cracking down on Palestinian terrorism and violence in the West Bank, including possibly the ability to institute a death penalty there. He also would have the power to send the IDF into Palestinian cities.He would also have some ability to impact the issue of settlement building, which the international community believes is the stumbling block to the peace process.Settlers tended to blame Ya’alon, not Netanyahu for his government’s poor record on such construction. So much so, that Samaria Regional Council head Yossi Dagan is now stating that he personally worked to unseat Ya’alon in favor of Liberman.They have high hopes for Liberman, not just because he himself lives in the Gush Etzion settlement of Nokdim, but because he has persistently promised them to support such building.The settler leaders and many on the Right have therefore welcomed Liberman’s appointment and wasted no time in reminding him of his promises for more building.To the Palestinians, it looks like putting the wolf in charge of the sheep.Pragmatically for those seeking to restart the frozen negotiations, it could make it difficult to put in place policies that would foster a climate for such renewed talks.