Belgian Prime Minister pledges to continue to fight against anti-Semitism 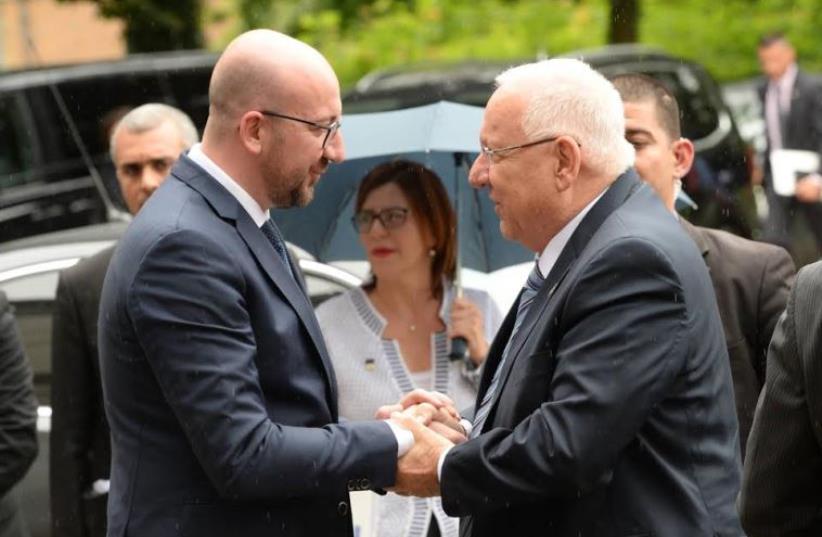 Belgian Prime Minister pledges with Israeli Presiden Reuven Rivlin to continue to fight against anti-Semitism
(photo credit: MARK NEYMAN / GPO)
Advertisement
Belgian Prime Minister Charles Michel met with Israeli President Reuven Rivlin in Belgium on Monday and pledged that his country would stand firm against anti-Semitism.“I had the opportunity to reaffirm Belgium’s commitment to fighting anti-Semitism. We will fight anti-Semitism with all our strength. This is a shared struggle,” Michel said after their meeting.Rivlin warned that it was dangerous to wait and see where current anti-Semitism will lead and what its impact will be on non-Jews.Israel is concerned by the increase in BDS activities in Belgium while simultaneously acknowledging that BDS is not as significant as the impression its activists would like to convey, and has had minimal effect on Israel’s economy, Rivlin said.“BDS is of no importance, but even their small victories can give the wrong impression,” Rivlin said.Israel views BDS as a modern form of anti-Semitism and believes the group’s goal is to eliminate the Jewish state.In talking about the global threat from Islamic extremism, Rivlin said there is no doubt today of the connection between terrorism and anti-Semitism, but added that Islamic jihad does not target only people of Jewish faith but is directed against people of all faiths. The two men also spoke about their common experience combating terrorism.“Today we know that there is a link between anti-Semitism against Jews, and Jihadi terror that kills innocent people of all religions,” Rivlin said.“We must not wait for anti-Semitism to become terror; we must fight it from the beginning, together, we must fight together against anti-Semitism,” Rivlin said.In March Belgium was rocked by two explosions; one in its international airport and another at the Maalbeek train station that killed 32 people.“We spoke today about the fight against terror, which stands central to the efforts of our two peoples and of the whole world. We must improve the coordination between our intelligence organizations to ensure that we will succeed in preventing future attacks,” Michel said.It is imperative for the intelligence services of both countries to work in closer cooperation because in the long run they had the same goal, Michel said.Belgium is interested in deepening and strengthening its political and security dialogue with Israel, the Belgian prime minister added.Rivlin for his part promised that Israel would stand shoulder to shoulder with Belgium during difficult times and in the struggle against terrorism.Michel and Rivlin met at the Château of Val-Duchesse, just outside of Brussels. The Israeli President then met with Belgian King Phillipe.On Tuesday Rivlin is scheduled to hold a working meeting the President of the European Council Donald Tusk. Later in the day he will talk with Secretary General of NATO Jens Stoltenberg.On Wednesday, Rivlin will address the European Parliament. His visit comes as the EU, like France, is working to become more involved in helping to resolve the Israeli-Palestinian conflict.Palestinian Authority President Mahmoud Abbas is scheduled to address the parliament on Thursday.