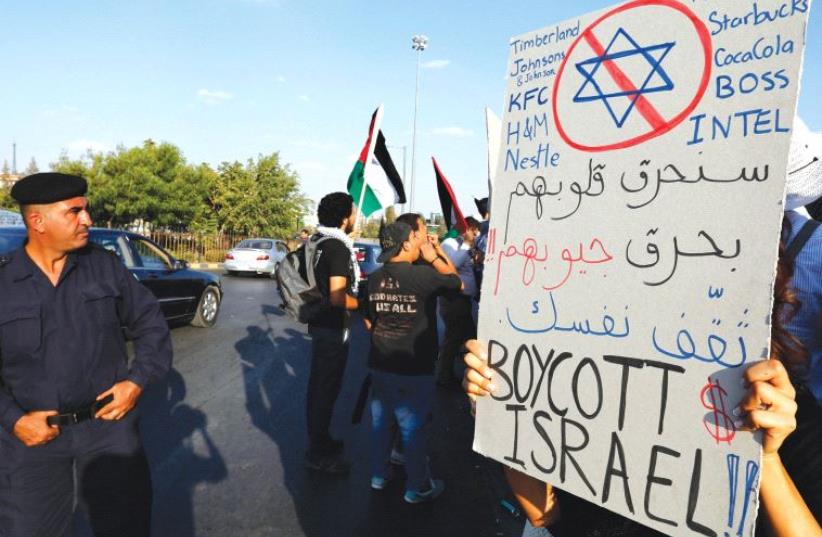 SAY NO to this. A Jordanian policeman stands guard near a protester holding a placard urging to boycott Israeli companies and products, in front of the Prime Minister’s office building in Amman.
(photo credit: REUTERS)
Advertisement
Israel on Monday denied entry to BDS activist Anuar Makhlouf, the executive director of the Palestinian Federation of Chile.Makhlouf has called publicly to boycott Israel, and acted to sabotage the bilateral relations between Israel and Chile, mainly in the economic and trade fields, according to a Strategic Affairs Ministry statement.“After a long and conclusive research that the ministry has conducted, it was determined that Makhlouf is one of the most prominent activists against Israel in Chile over the years,” the statement said.Meanwhile, three Swedish citizens, members of the World Council of Churches, were barred from entering Israel through Ben-Gurion Airport – two on Sunday and one on Monday – over alleged BDS affiliation. The World Council of Churches previously denied affiliation to BDS when its employee, Dr. Isabel Apawo Phiri, was in December the first NGO official to be denied entry to Israel over alleged BDS affiliation.On Monday, the Strategic Affairs Ministry said that it has been enforcing the same policy for the past six months, along with the Interior Ministry, regarding the entrance of BDS activists.Public Security and Strategic Affairs Minister Gilad Erdan said that baring Makhlouf entry was meant to prevent him from advancing boycotts of Israel.“The days when foreign BDS activists who want to harm Israel are coming here and acting freely are over,” said Erdan. “We will not allow entry to our country’s enemies.”Interior Minister Arye Deri Minister said the case illustrates “repeated attempts by boycott activists against Israel to enter Israel for improper purposes.”The move came after the Knesset passed a law that enables the Interior Ministry to refuse entry and residency visas to non-Israelis if they have “issued a public call” to boycott Israel – including settlements in the West Bank – or have stated their intention to participate in a boycott.On Friday, British citizen Kamel Hawwash, a board member of the Palestinian Solidarity Campaign, was denied entry to Israel. British national Hugh Lanning, chairman of the Palestinian Solidarity Campaign, was denied entry last month.