“From our perspective, the problem is that the Palestinians have no desire to conduct serious negotiations, and no amount of bureaucratic creativity can help that,” one official said. 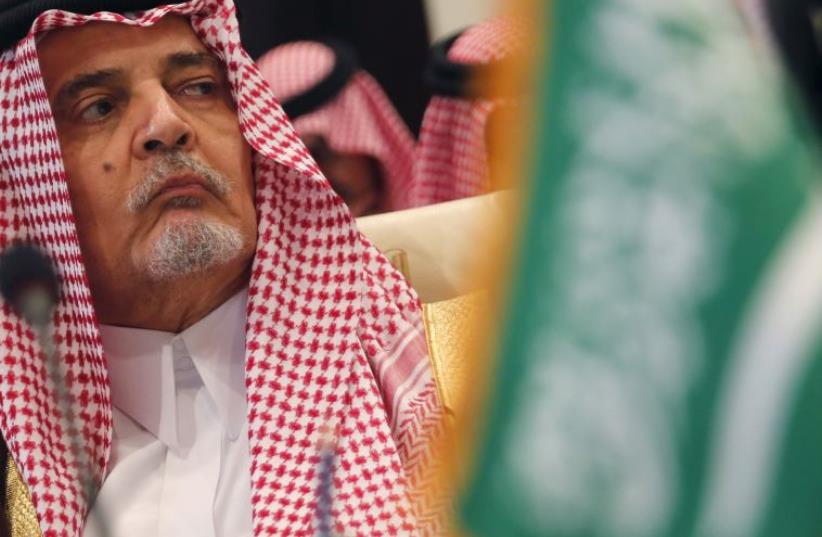 Saudi Arabia's Foreign Minister Prince Saud al-Faisal attends the foreign ministers of the Arab League meeting ahead of the Arab Summit in Sharm el-Sheikh
(photo credit: REUTERS)
Advertisement
An EU proposal to expand the Quartet as a way of jump-starting the stymied Israel-Palestinian diplomatic track elicited shrugs in Jerusalem on Sunday, with officials saying that what is needed is a Palestinian desire to hold talks, not “bureaucratic creativity.”“From our perspective, the problem is that the Palestinians have no desire to conduct serious negotiations, and no amount of bureaucratic creativity can help that,” one official said.The EU’s foreign policy chief Federica Mogherini said at a meeting of EU foreign ministers on Friday that Jordanian, Saudi and Egyptian representatives would take part in an expanded meeting of the Quartet on the sidelines of the UN General Assembly later this month in the hopes of jump-starting some sort of diplomatic process. The US, EU, Russia and the UN currently make up the Quartet.“We hope that this restart of the process can lead to improvements on the ground and also to re-open prospective and political horizons to the talks,” she said.Foreign Ministry Director-General Dore Gold, in a recent interview with The Jerusalem Post – without referring specifically to the idea of an expanded Quartet – said that “there are a number of initiatives out there that are being considered by various European players.”Gold said Israel could “live” with some of these, while others “are basically contrary to how Israel understands the rule of Middle East diplomacy.”Israel made clear in recent months that it was adamantly opposed to a French idea to bring a proposal to the UN Security Council that would set the parameters of a two-state solution, as well as a deadline for the creation of a Palestinian state, along the 1967 lines - with mutually agreed land swaps - and east Jerusalem as its capital.The French have since back-peddled on that proposal, which the Palestinians also objected to because it did not meet all their requirements, and instead continue to talk about the establishment of an international “support group” to move the process forward.Mogherini’s suggestion is a variation of a proposal that the French have being discussing recently for a support group – made up of the four Quartet parties – along with some Arab countries and other European states, as well.When asked about the idea, Gold refrained from going into details, but said that Israel thinks that negotiations “should be based on bilateral contact,” and not on a conference of people who may “make the diplomatic situation murkier.”