Israelis protest Trump's travel and immigration ban , while standing across from US embassy in Tel Aviv on Jan. 29, 2017
Advertisement
Some 40 demonstrators gathered in front of the US Embassy in Tel Aviv on Sunday evening to protest President Donald Trump’s decision to put a fourmonth hold on asylum seekers entering the United States and a temporary ban on travelers from Syria and six other predominantly Muslim countries.Activists stood by the beach-side road, chanting, singing and holding signs with slogans such as “Dump Trump, Dump Bibi,” “No ban, no walls” and “For you were strangers in the Land of Egypt.” The history of the Hebrews as slaves in Egypt was a central theme in several of the demonstrators’ songs.Another sign asked drivers to “honk if you love refugees,” and received the appropriate response from passing vehicles. 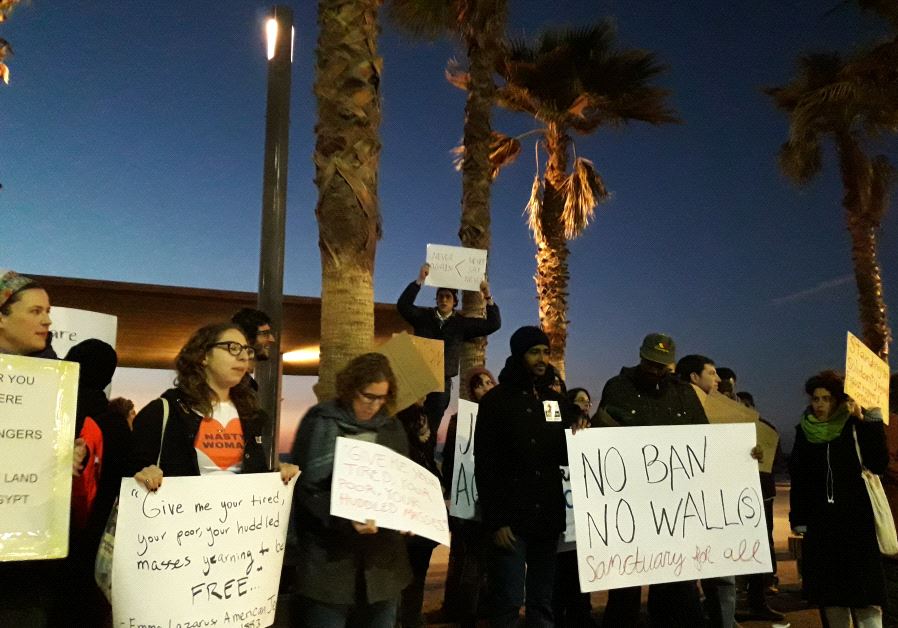 Protesting in Tel Aviv [photo credit: Tamara Zieve]
The protest was organized by the organization Right Now: Advocates for African Asylum Seekers in Israel, which decided to join in the wave of protests taking place across the US and around the world against Trump’s policy, as well as against Prime Minister Benjamin Netanyahu’s support of it.“We felt we needed to be doing something here to protest both the policies that have been going on in the United States and the policies going on in Israel for years,” the group’s cofounder, Elliot Glassenberg, told The Jerusalem Post.“We believe that only by taking a global approach can we truly address the global refugee crisis.”Glassenberg said that while Trump’s policies are new to Americans, Netanyahu’s policies on refugees are of far longer standing and he is concerned that Israeli society has become apathetic.Eritrean Teklin Michael was among a handful of African asylum-seekers who joined the protest.“This is about protection,” he told the Post. “I am not talking about religion, or any special group, I’m talking about those who are fleeing from dictatorship, those who are fleeing from terrorism, those who are fleeing hardship and seek protection. Whether Muslim, Christian or Jewish – everyone needs protection.”
Protesting in Jerusalem against the Trump immigration ban to US on Jan. 29, 2017 (credit: MARC ISRAEL SELLEM / THE JERUSALEM POST)
He says Israel’s policy toward refuge- seekers is no better than that of the new US administration, and that he has been waiting 10 years for a response to his request for asylum. “It’s the same.Netanyahu built a wall by Sinai and now Trump is doing the same with Mexico.”Israeli-American Ben Rathauser said he was upset by the way politicians, particularly Trump, were exploiting fears regarding the economy or terrorism, to advance their agendas.“It’s very frustrating, especially as a Jew, to see a policy that’s lacking so much morality and lacking any real vision...it’s very upsetting to see how this is strictly about showing that the government can do something, as opposed to doing what’s right and helping those in need. We have a history with the US turning Jews coming from Europe down, and I can’t help but draw parallels.”Fellow US-Israeli dual citizen Becca Strober echoed this sentiment, saying that having grown up learning about the Holocaust, she saw “extremely scary parallels.“I stand with refugees in both countries,” she said. “Everyone deserves to live with respect and dignity – we should not be closing our doors.”Meanwhile in Jerusalem, a similar number of American and Israeli protesters gathered at Paris Square – halfway between the Prime Minister’s Residence and the US Consulate.“No one takes security and fighting terror more seriously than we do here in Israel,” said demonstrator Adam Block.“But we have to demonstrate against this slap-dash policy that bans war refugee children and US Army translators while it lets in radical extremists as long as they are from wealthy countries.”