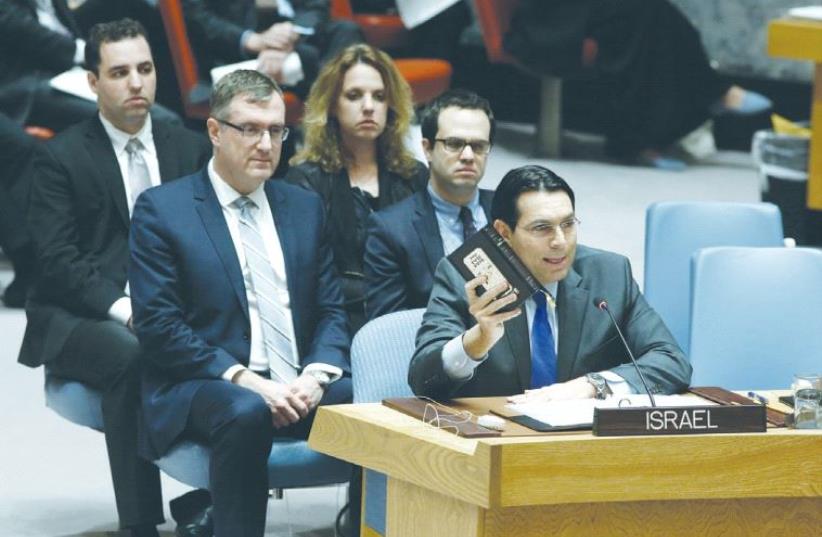 UN AMBASSADOR Danny Danon speaks at the Security Council.
(photo credit: EVAN SCHNEIDER/UN)
Advertisement
NEW YORK – In the aftermath of the UN Security Council resolution condemning Israeli settlement activity, American Jewish organizations expressed their strong opposition to the Middle East peace conference expected to take place on January 15 in Paris.Some 70 countries are expected to attend the summit, organized at the initiative of French President François Hollande.Netanyahu has repeatedly rejected the conference proposal, making clear he would agree to meet with Hollande and Palestinian Authority President Mahmoud Abbas for talks, but only if there is no international summit.
France seeks to revive Israel-Palestinian talks in Paris, seeking two-state solution
Leaders of the Conference of Presidents of Major American Jewish Organizations called this week for the French to cancel or, at least, postpone what they called an “ill-conceived, poorly timed and damaging” event.“Now is a time for serious reflection on how peace can best be achieved, not for another sham forum in which the usual one-sided outcomes against Israel are the likeliest result,” the group wrote in a statement.“Given the significant issues that were raised in the past week which have long term implications for the prospects for peace, proper preparation after serious consultation is essential.”According to the Conference of Presidents, there are a number of compelling reasons to postpone the Paris event, including the impending transition to a new US administration, just five days later.“It makes no sense that the next administration is precluded from participating in a discussion of an essential component of US foreign policy with which it will be engaged,” they explained.“Possible outcomes would add further uncertainty that will harm future prospects while unnecessarily inserting a new element of instability to the region.”The Conference of Presidents also urged the US to announce that it will not participate on January 15 in light of recent events, and further called on leaders of all the invited countries to “work to cancel the Paris meeting and refocus on the parties coming together for direct negotiations.“Israel has long sought direct talks, it is time for the Palestinian leaders to stop evading their responsibility and seeking to use international fora to avoid the only true path to a lasting peace,” they added.American Jewish Committee CEO David Harris also told The Jerusalem Post he “can’t see any possible reason to hold the Paris conference, all the more so days ahead of a change in US administrations.”“History has amply shown that it’s not the way to advance the Israeli-Palestinian peace process,” he said.Anything other than bilateral talks, Harris added, “simply convinces the Palestinians they can avoid the face-to-face bargaining table, while persuading the Israelis they’re dealing both with Palestinian avoidance and international mischief in the guise of ‘do-gooderism.’” Regardless of recent events at the United Nations, Zionist Organization of America national President Morton Klein added the conference is “a disgrace” because it promotes “the establishment of a Hamas/Fatah terror state whose two charters call for Israel’s destruction.“Peace is not possible while the Palestinian Authority [President] Mahmoud Abbas promotes murdering Jews in his speeches, media, and schools,” he told the Post.“When you combine the Paris conference and the UN actions along with the Islamic terror state Iran receiving $150 billion and a pathway to nuclear weapons, the world is clearly working to endanger Israel’s very existence.”Reuters contributed to this report.