In recent years, lawmakers have disrupted speeches in the Knesset by several world leaders. 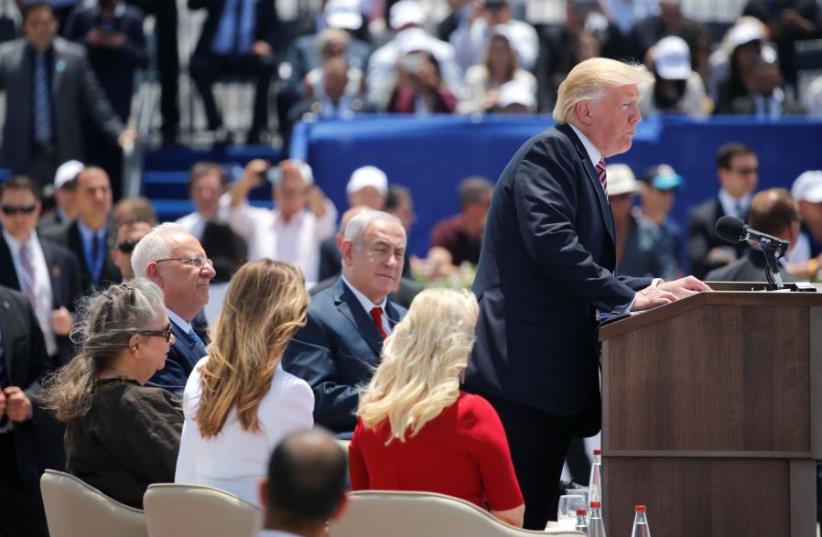 US President Donald Trump talks on a podium, upon his arrival at Ben Gurion International Airport in Lod near Tel Aviv, Israel May 22, 2017
(photo credit: REUTERS)
Advertisement
US President Donald Trump did not address the Knesset for fear he’d be heckled by lawmakers, Knesset Speaker Yuli Edelstein said Tuesday.According to Edelstein, the White House’s first preference was for Trump to speak in the Knesset.However, because Israel could not guarantee that the president would not be interrupted, it did not come to be.Edelstein invited MKs “to dream with me for 10 minutes, that this house would not look like it does now, but it would be full of people, 150-160 people in this plenum, because all the MKs and ministers, and former MKs and ministers are here, the mezzanine is packed, and dozens of TV crews from around the world are here for President Trump’s speech.“Think how just because of five, six, or seven MKs for whom 20 seconds of so-called glory are more important than the dignity of the Knesset, our parliament, and of the State of Israel, all this didn’t happen,” he said, addressing the few MKs who were present. “It’s sad, but that’s the reality.”The speaker said he hoped that MKs would think about what he said, and take it as a call for action to make a change.Edelstein has been very critical of leaders who avoided the Knesset in the past, including former US president Barack Obama.One MK managed to get his “20 seconds of so-called glory,” even though Trump avoided the Knesset.On Monday, divisive MK Oren Hazan (Likud) snuck into Trump’s welcome ceremony at Ben-Gurion Airport, to which he was not invited, introduced himself as the Israeli Trump and snapped a selfie of the two.In recent years, lawmakers have disrupted speeches in the Knesset by several world leaders. Arab MKs walked out on Prime Minister Benjamin Netanyahu during the special plenum session in honor of former UK prime minister David Cameron and heckled former Canadian prime minister Stephen Harper, telling him he should join the Likud.When former European Parliament president Martin Schulz addressed the Knesset, he falsely claimed Israel was denying the Palestinians water, prompting Education Minister Naftali Bennett to interrupt him and walk out along with others from his Bayit Yehudi party.