Netanyahu, Kerry expected to meet next week in Europe 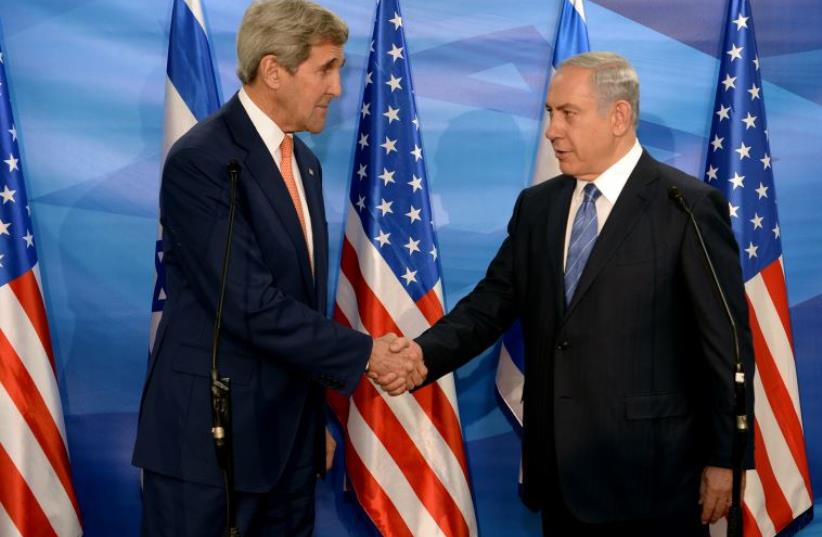 US Secretary of State John Kerry with PM Netanyahu
(photo credit: MATTY STERN, US EMBASSY TEL AVIV)
Advertisement
Prime Minister Benjamin Netanyahu is expected to meet next week in a European capital with US Secretary of State John Kerry, to discuss possible ways of moving the diplomatic process forward.While Netanyahu and Kerry speak on a regular basis – they last spoke on Friday – they have not met since January, at the World Economic Forum in Davos. Kerry has not been in Israel since November, when he arrived in an effort to help tamp down the violence that erupted in the latest wave of Palestinian terrorism that started a month before.Among the likely agenda items will be the possibility of creating a regional umbrella to re-launch a diplomatic process with the Palestinians; the French diplomatic initiative; and a Quartet report to be released within the next few weeks spelling out the reasons for the current diplomatic logjam and suggesting ways to break through it.The US, according to diplomatic sources, has been actively involved in writing this document, at times arguing with the other members of the Quartet – the EU, Russia and the UN – to ensure it is balanced.Netanyahu and Kerry are also expected to discuss the situation in Syria.While Kerry did attend the meeting of some 30 foreign ministers and officials in Paris earlier this month to launch the French initiative, Washington has not expressed a great deal of enthusiasm for the plan, beyond saying that the meeting was a good way for the international community to reaffirm its commitment to a two-state solution.The US was instrumental earlier this month in significantly watering down the communique that came out of the Paris meeting, essentially rendering it little more than a pledge of allegiance by those in attendance to a two-state solution, with the participants reaffirming “their support for a just, lasting and comprehensive resolution to the Israeli-Palestinian conflict.”There is concern in Jerusalem, however, that the foreign ministers of the 28-member EU scheduled to meet in Luxembourg on Monday will throw their support behind the plan, something that would give it added momentum.The Paris summit was considered by participants a “launching pad,” with the next step being the establishment of working groups to deal with issues such as security and economic development. The goal is to have an international conference by December, with the participation of Israel and the Palestinians. Neither Israel nor the Palestinian Authority were invited to the Paris summit.Netanyahu has come out adamantly against the French plan, arguing that it provides a disincentive to the Palestinians to negotiate with Israel, since they believe that if they hold out, the international community will impose a solution on Israel.Jerusalem, meanwhile, is continuing to lobby European governments against the plan.“Israel continues with its intensive diplomatic efforts, and we hope that our point of view will prevail,” said Foreign Ministry spokesman Emmanuel Nahshon, adding that Israel will continue pressing its point through the EU foreign ministers meeting in Luxembourg.