‘Netanyahu more scared of political rivals than the ICC’

The organization Yesh Din, which had initially petitioned the High Court of Justice against Amona, said the bill was a large scale form of “land theft.” 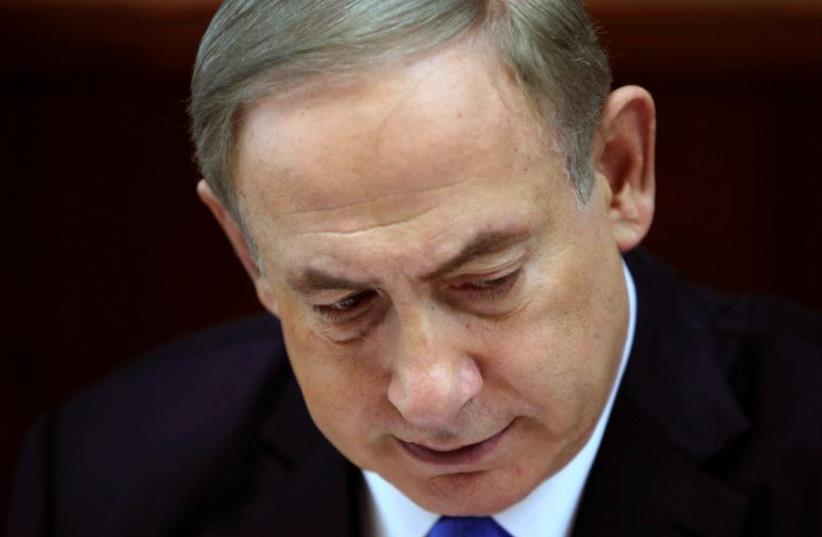 Benjamin Netanyahu
(photo credit: REUTERS)
Advertisement
Prime Minister Benjamin Netanyahu is more afraid of his political rivals than he is of the United Nations or the International Criminal Court, angry Amona residents charged on Monday night.They issued their statement after the Knesset gave its preliminary approval, 60-49, to a settlement bill that would retroactively legalize 4,000 settler homes on private Palestinian property. The settlement bill offers to compensate the Palestinians for their property loss.Prime Minister Benjamin Netanyahu voted for the bill on Monday night, even though he had privately stated in the last week that he feared it could strengthen the possibility that the International Criminal Court could pursue the issue of West Bank settlement activity.The timing of the bill was designed to circumvent a High Court of Justice order to demolish the Amona outpost by December 25, because it was illegally built on private Palestinian property.
MK Hotovely on legality of settlement resolution and regarding Amona
But in-spite of numerous public promises by ministers, the Amona outpost was taken out of the bill at the last minute to appease the Kulanu party, which threatened to vote against the bill unless it excluded the outpost.The Kulanu party, whose support was necessary for the bill's passage, said it did not want to support a law that overturned a court ruling, a move which it believed weakened the judicial system.The Knesset is now set to hold a first reading on the bill on Wednesday. The state has offered the 40 families in the Amona outpost a temporary housing alternative at a site very close to the community’s current location.On Monday night, however, the Amona families, insisted that they would refuse to abide by the court order and asked politicians to ensure that language protecting their outpost was placed back in the bill. Prime Minister Benjamin Netanyahu (Likud) and Education Minister Naftali Bennett (Bayit Yehudi) have the power to insist that Kulanu vote for a settlement bill that protects the Amona homes, as well as a number of other sites in Judea and Samaria under similar court orders. This includes nine homes in the Ofra settlement and 15 in the Derech Haavot outpost.The bill was created in order “to solve the problem of the residents in Amona, Ofra and Derech Havot and to prevent an injustice to scores of families that built their homes as emissaries of the state,” the Amona families said.“Unfortunately, Bennett and Netanyahu, who are prepared to pass the law and to deal with international threats (such as the ICC or the United Nations Security Council), caved against the smallest of political threats from the Kulanu party, threats that have nothing behind them,” the Amona families said.The alternative housing site, which they referred to as a “ghetto,” is not large enough to sustain a community and even that is temporary, they said.“We expect the Education Minister and the Prime Minister not to give up, but rather to find a way to include Amona and other similar places within the legation before the second and third readings,” the Amona families said.“We call on those faithful to the land of Israel, who have stood by us until today, to join us at the outpost until such time as the law is amended, or until the day of demolition,” the Amona families said. There needs to be a far reaching “national outcry” over the intention to demolish an entire Jewish community and to transfer its families.“We’re certain that the moment the leaders see the public support for us, they will include Amona in the legislation,” the Amona families said.The organization Yesh Din, which had initially petitioned the High Court of Justice against Amona, said the bill was a large scale form of “land theft.”It doesn’t even offer the Palestinians the option of protesting the “theft of their land,” the organization said.It further added that the Knesset, by legislating the law, was acting as a sovereign entity over Area C of the West Bank, and had had taken a step of de-facto annexation.