Litzman told reporters at the Prime Minister’s Office that he had no choice but to resign after Israel Railways continued to employ Jews on Shabbat.

By GIL HOFFMAN, LAHAV HARKOV, JEREMY SHARON
NOVEMBER 27, 2017 06:04
Israeli Minister Benjamin Netanyahu attends the weekly cabinet meeting in Jerusalem
(photo credit: REUTERS/GALI TIBBON/POOL)
Advertisement
Prime Minister Benjamin Netanyahu reached an agreement with the heads of the United Torah Judaism and Shas parties Sunday night and claimed to have ended a coalition crisis over Israel Railways work done on Shabbat that resulted in the resignation earlier in the day of Health Minister Ya’acov Litzman.“The coalition is strong and stable,” Netanyahu said after reaching the compromise. “We will continue to work for the citizens of Israel.”The parties agreed to pass laws that will permit the Labor and Welfare minister to take Jewish tradition into account when authorizing train repairs; maintain the status quo whereby most stores are closed across the country but open in Tel Aviv; and enable a deputy minister to run a ministry.The latter two bills are intended to bypass a Supreme Court ruling that would have allowed other municipalities to permit stores to open on Shabbat, and one that resulted in Litzman’s September 2015 promotion from deputy minister to become his party’s first minister in decades.Litzman, the UTJ leader, said following the meeting that he would not agree to return to the Health Ministry until the two bills are passed.Likud officials insisted that, despite the understandings, all steps would be taken to minimize weekday repairs on the railways that would inconvenience commuters. Channel 2 reported that an effort would be made to make six Sundays each year non-work days during which repairs could be made to the rails. 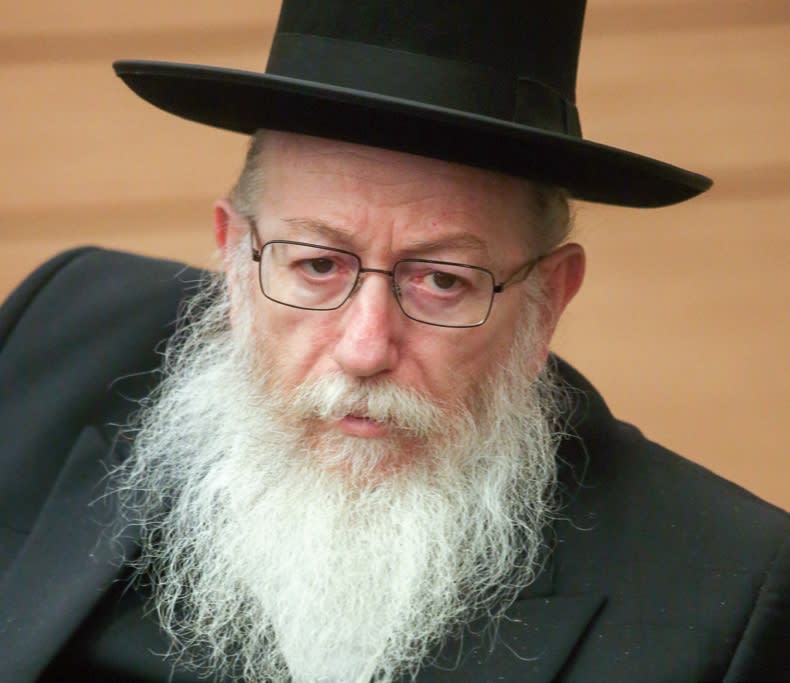 Ya'acov Litzman (credit: Marc Israel Sellem)After submitting his resignation to Netanyahu and Cabinet Secretary Tzachi Braverman, Litzman told reporters at the Prime Minister’s Office that he had no choice but to resign after Israel Railways continued to employ Jews on Shabbat. He said, however, that he would remain in the coalition and hoped his reforms in the Health Ministry would continue.“In all generations, the Shabbat has kept us, and it is the basis of the covenant between the Jewish people and God,” Litzman said. “Unfortunately, Israel Railways has recently made Shabbat the national day of repair work, including unnecessary work done just to anger people. It has been done despite the coalition agreement and the status quo on matters of religion and state.”In his resignation letter, Litzman lamented his failure to prevent repairs from taking place on Shabbat, which he called a red line for him.In a video he published, Litzman said that, as a minister, he could not accept collective responsibility for the breaking of Shabbat. As health minister, he said he tried to help the entire population, regardless of their sector and affiliation and had many accomplishments.In the wake of Litzman’s resignation, the Hamodia newspaper, the mouthpiece of Agudat Yisrael, which is a constituent party of UTJ, sang Litzman’s praises for having resigned, and fellow Agudat MK Yisrael Eichler was equally strong in voicing his support for the former health minister.Hamodia’s Sunday morning editorial began by insisting there was no ulterior motive in Litzman leaving other than to uphold the dignity of Shabbat.“There are no hidden political reasons here apart from the fact that it is impossible to bear the responsibility of a member of government for decisions and a situation that is in defiance of Heaven, God forbid,” stated the newspaper. “Rabbi Litzman could not knowingly continue to be a partner to turning Shabbat into ‘national repairs day’ and thereby uproot Shabbat from the public space,” the paper said.The newspaper had a stark message for the government, saying that even though the current coalition “is one of the best there has been for the Haredi [ultra-Orthodox] public,” and even though the Haredi public and leadership stands to lose if they resign from the coalition and topple the government, “Shabbat is more precious than this.”Eichler said the status quo, in which the state commits to not desecrating Shabbat in public, has been repeatedly flouted, describing the situation as “a slippery slope” that would lead to rampant desecration of Shabbat in another decade.“We are staying in the coalition for the moment to repair what the government is destroying,” he said, adding: “The prime minister knows that if the Shabbat desecration continues and the needs of the Haredi community are ignored in the realm of housing and IDF conscription, the government will come to the end of the road.”Labor and Social Services Minister Haim Katz (Likud) vigorously denied accusations by Eichler that he allowed railway work to take place on Shabbat in order to hurt Netanyahu politically.Netanyahu told Likud ministers he would keep the health portfolio and asked them not to speak about what happened with Litzman in order to avoid inflaming tensions.Social Equality Minister Gila Gamliel, who was in Egypt and did not hear Netanyahu’s request, said Litzman was one of the best health ministers Israel has had and that she hoped he would return to the cabinet table.The opposition accused Netanyahu of giving in to Haredi interests in order to stay in power, rather than acting for the general good. Yesh Atid leader Yair Lapid called upon him to immediately appoint a full-time health minister, calling it “a matter of life and death.”Zionist Union leader Avi Gabbay said, “The Netanyahu government is at its end. Its culture isn’t dealing with what is good for the public, rather what is good for it. A government with such a corrupt culture can’t continue to function.”Gabbay told Army Radio: “In a modern society, if we want the trains to work all week, we have to maintain them on Shabbat. When the whole government is spin, the Haredim can [create spin], too.”Yesh Atid MK Yael German lamented the “anomalous situation in which Litzman can veto any bill or action the public needs [as] anti-democratic and sees only narrow, sectoral interests.”German said Haredim should have a place in the cabinet as part of the nation, but that they cannot force their way of life on the general public.“Whoever wants to sit in a democratic public cannot have veto power to strangle the government. And the threats to quit, which are given into each time, make the public suffer,” German stated.Zionist Union MK Itzik Shmuli said: “Netanyahu wants to sell the public interest for cheap with more bizarre bills. This government has a split personality. On Friday, they don’t give in to Haredi ultimatums and, on Sunday, they want to anchor religious coercion in the law.”