The announcement comes right after the Prime Minister's Australia and Singapore trip; some in the Foreign Ministry are skeptical of it coming to fruition. 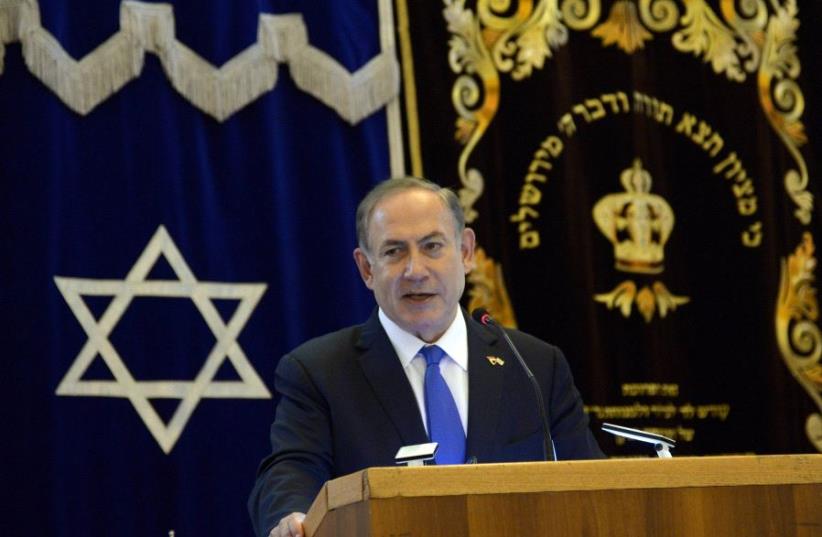 PM Benjamin Netanyahu speaks to Singapore's Jewish community before leaving to Australia
(photo credit: CHAIM ZACH / GPO)
Advertisement
Reflecting the growing importance of east Asia to Israel, Prime Minister Benjamin Netanyahu announced on Monday his intention to open two new bureaus in the Foreign Ministry: one for China and another for India. But some ministry officials said this will never happen, because of budgetary constraints.Netanyahu, who is also the country’s foreign minister, has put furthering ties with Asia and Africa high on his diplomatic agenda. Following his groundbreaking visits to Singapore and Australia last month – the first sitting prime minister to do so – he is scheduled to travel to China for the second time in four years later this month.Indian Prime Minister Narendra Modi is scheduled to visit Israel in the summer. He would be the first Indian prime minister ever to visit the country while in office.At a meeting with the heads of Israeli missions in the Asia-Pacific region, Netanyahu said the decision to establish China and India bureaus shows the “importance that we place on these two major powers.”Some inside the ministry, however, are skeptical that the move would be carried out due to a lack of funds. The ministry is on the brink of yet another workers strike, because a three-year old wage agreement has not yet been implemented.One veteran ministry employee said it was “kind of funny” hearing Netanyahu talking about opening another bureau.“They [the Treasury] still owe us the money from the last [wage] agreement. How can he say he will open something new, when we don’t have the money? We may go on strike tomorrow.”Nevertheless, Netanyahu told the meeting there is a need to break through the bureaucracy in dealing with China and India. “We must continue to tighten these links on the basis of our interest in opening new markets and developing products,” he said. “A major portion of the world’s population is located in the Asia-Pacific region. This is a rising power. We are moving toward a global market economy and a technological revolution.”Israel’s exports to China have increased significantly over the last decade, going from just over $1 billion in 2007 to $3.3b in 2016. During this same period, Israel’s exports to India rose from $1.6 billion in 2007 to $2.4b last year.In the Foreign Ministry’s organizational structure, China and India fall under the purview of the Division for Asia and the Pacific. This division is divided into four different departments, with China being dealt with by the northeast Asia department, which also deals with Japan, South Korea and Taiwan. India is in the southeast Asia department, along with Vietnam, Myanmar, Nepal, Singapore, the Philippines, and Thailand, among other states.Creating separate bureaus to deal with India and China would mean that more manpower inside the ministry would be devoted specifically to these two countries.