Parachuting beyond the glass ceiling 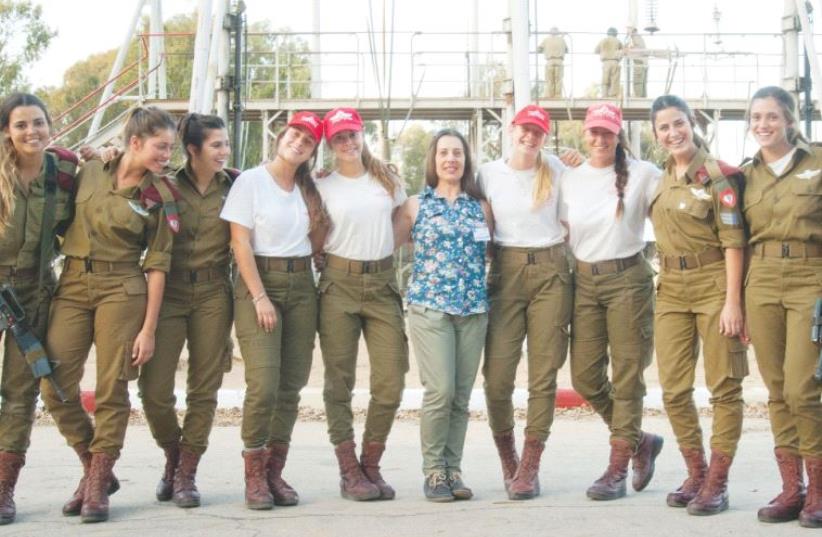 RONIT BURDETTE (center), the IDF’s first female parachuting instructor, poses recently with a class of today’s women instructors
(photo credit: IDF)
Advertisement
While the debate over female recruits in the IDF Armored Corps continues to rage, some 20 female recruits last week began the Paratroop Brigade’s instructors course.The IDF has had some mixed-gender combat units for nearly two decades, and recently opened more combat positions for female recruits.It now boasts that 90% of positions are open to women.IDF Spokesman Brig.- Gen. Moti Almoz recently told Army Radio that those who oppose the integration of women in combat roles should “wake up to the reality of Israel in 2016. Women perform many combat roles, and we plan to make more roles available to them.”While the core of the IDF remains male-dominated, a female soldier has from time to time broken through the army’s glass ceiling, such as Ronit Burdette, the first female paratrooper instructor.“I made my dreams come true by being the first woman jump master and military parachuting instructor in the IDF,” Burdette told The Jerusalem Post. “I have over 500 parachute jumps in the military and all over the world.”Burdette, who served from 1981 to 1984, said that she chose to be an instructor in the Paratroop Brigade out of love and admiration, referring to seeing the historic images of paratroopers at the Western Wall after reconquering it from Jordan in 1967.Burdette recalled one specific Independence Day as a child, when her parents took her to the beach. “I remember seeing soldiers jumping out of a Hercules, and it was at that point that I decided that I wanted to be like them. I wanted to do this as a woman,” she said.When the time came for her to enlist, however, she realized that women could neither be paratroopers nor serve as instructors, an option she thought would be open to her. Nonetheless, she decided to ask how to join the instructors course, and was told that it was not closed to women – just that no woman had successfully completed the course.Burdette pushed the army to let her try the course, sending letters to senior officers and even to the chief of staff.She waited anxiously, until one day an officer “came back with a folder, and when I opened the folder I saw my name next to ‘Parachuting School Instructors Course.’ I was overjoyed. I felt that the letter I sent to the chief of staff was not in vain.”As one of the only women in a course of 40 men, Burdette faced many obstacles.“They didn’t know how I got there, what I was even doing there,” she said, adding that it was then that she realized she was doing something extraordinary.The role of a combat instructor is one “full of responsibility,” she said. Instructors “are responsible for the lives of our soldiers who protect our country. They believe in us; they trust us to bring them from the plane to the ground safely.”To be an instructor is not simple, she said, pointing to the intensive physical and mental strength needed to complete the course.“They tried to break me, they tried to have me give up and leave the course.”Lt.-Col. Lior Agassi, commandant of the IDF Parachuting and Aviation School, told the Post, “The female recruits we get in our course are some of the best in the entire army,” and go through the same demanding training as their male counterparts.The parachuting instructors course lasts a full year, during which time recruits jump in all possible scenarios, including over water from altitudes of 1,200 to 12,000 feet. The recruits have all gone through basic training for combat soldiers, including a 40-km.march, and serve for the full mandatory service of close to three years, just as with male recruits, instead of the two years to which most female recruits are obligated.Burdette claims to be not only the first female combat paratrooper instructor in the IDF, but the first in the world.“If someone wants something very hard and is willing to work hard for it and dedicate their time, their efforts, their beliefs in themselves, they will succeed,” she said. “It depends on how strong they want their dreams to come true. I wish the new female recruits and future military instructors to succeed in their duty and serve our country to the best way they can.”As for new recruits, Agassi said, “They must understand that their service is very important and very meaningful. Every job in the army makes a difference, it doesn’t matter if you’re sitting behind a desk or if you serve on the front line.“Their job is always bigger than themselves, sometimes even bigger than the team itself.Those that are enlisting are going to a very interesting, important and difficult job. The road is difficult, but they will see the fruits of their labor in the end.”And Burdette? She saw her childhood dream come true in 2008, when she finally got to jump out of a Hercules on Independence Day.