Changes to Americans' views of Netanyahu were mostly felt among Democrats.

By HERB KEINON
MARCH 11, 2015 16:43
Netanyahu speaks to Congress
(photo credit: screenshot)
While the impact of Prime Minister Benjamin Netanyahu’s speech to Congress on the Israeli electorate will not be fully apparent until after Tuesday’s vote, a Gallup Poll released on Monday indicated that it has weakened his position among the US public.Netanyahu’s favorability rating among the American public dropped 7 percentage points – from 45 percent in early February, before the speech, to 38% now, according to the poll. Though his “unfavorable” rating rose from 24% to 29%, more Americans still have a positive, rather than negative, view of the prime minister.This is not true of Democrats, however; 46% of them view him unfavorably, and only 17% favorably.Before the speech, an equal number of Democrats – 32% – held each view.Gallup explained the steep drop among Democrats as a result of their “likely taking their cues about the appropriateness of Netanyahu’s address and his message on Iran from President [Barack] Obama, who disagreed both with Netanyahu’s addressing Congress and his arguments against a nuclear agreement with Iran.”Among Republicans, in contrast, 62% now have a positive view of the prime minister, as opposed to 60% last month, and only 16% view him unfavorably.Although Netanyahu’s favorability rating is significantly lower than the one he had before the speech, it is still his third-highest rating out of seven similar polls Gallup has taken on this issue since 1998. It is also 3 percentage points higher than it was in 2012.In this latest poll, conducted March 5-8 among 1,025 adults, another 33% said they did not have an opinion of Netanyahu.The poll had a ±4% margin of error. 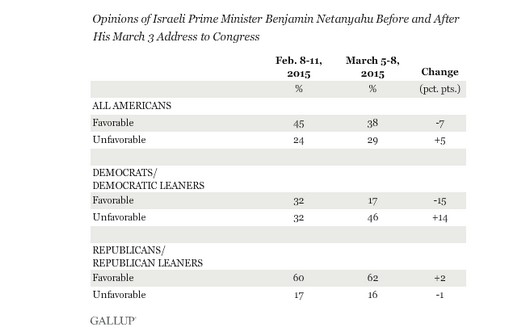