Jerusalemites see relocation of US embassy as important gesture

"Sends message to world that Jerusalem is our capital." 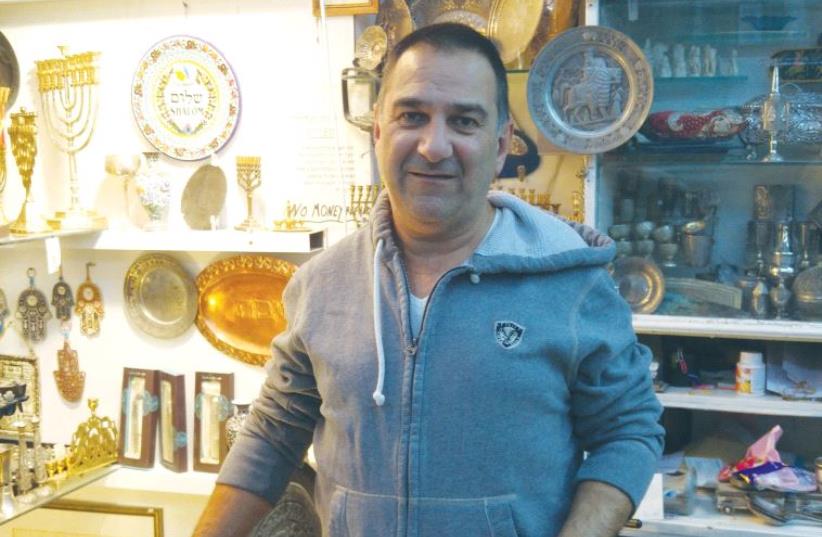 SHMUEL GHATAN, a Jerusalem store owner, says he would like to see the US Embassy moved to the capital.
(photo credit: DANIEL K. EISENBUD)
A cross-section of Jerusalemites expressed cautious optimism that President-elect Donald Trump will finally relocate the US Embassy from Tel Aviv to the capital, noting that such a move would make a powerful statement to the world, while conceding it could exacerbate tensions.As rain and sleet poured down on the city amid high winds on Wednesday afternoon, Adi Bukshpan and Lev Rovinsky, both 26, took refuge in The Coffee Bean on Jaffa Road, where they ate lunch.“I think it’s more important for Americans than Israelis to have the embassy moved to Jerusalem because it’s a political statement since the city is in dispute,” said Bukshpan, a linguistics student at the Hebrew University.“But I don’t think most Israelis know where the foreign embassies are, or why they are in Tel Aviv.”Asked if she supported the proposal, Bukshpan replied, “The city is complicated enough to live in, so posting diplomatic people here will add to that.”Rovinsky, an engineer, said the move would indeed add strain to an already volatile capital, but added that he supported the idea in principle.“This will create more tension in Jerusalem, but in the long-term, I think it is a good thing because it is a statement to the world that America stands with Israel,” he said. “So, short-term it will be problematic, but long-term it will be a good thing.”A few doors down, at a popular pastry shop, Eitan Karshai, a 56-year-old musician, said he is hopeful the embassy will relocate to Jerusalem. Noting the decades of political rhetoric by US presidential candidates, he said the move is long overdue.“The relationship between Israel and the United States is so long, and there have been many promises that it will be here, and then nothing happened,” he said. “Now, after so many years, I think it is time.”While conceding that he is uncertain if Trump will stand by his pledge, Karshai said he remains cautiously optimistic, adding that he is prepared for a heated Arab response.“It’s already a volatile city, so I think it will be the same,” he said. “Yes, there will be problems with the Arabs, but there have always been problems with them. Eventually though, it is a good idea, because I think it’s symbolic because all other embassies are in capitals, except ours.”Tali Gohari, 24, a business student at Hadassah College, also said the relocation is long overdue.“I think it’s good for us, because Jerusalem is our capital, and we have waited a long time for it,” she said at another nearby coffee shop.While perusing a men’s clothing store off Zion Square, Nir Bassa, a 40-year-old public health researcher, said he will only support the move if it does not endanger peace negotiations with the Palestinian Authority.“It is very important that the embassy will be in the capital of Israel, but on the other hand, it should not be done in a manner that will jeopardize the ability to move forward with a peace agreement with our neighbors,” he said.“So, it is important, but not at the expense of jeopardizing potential peace. I don’t really think that it should jeopardize it, but if it is considered, it should be explained to the Palestinians in a manner that they understand that it will be in west Jerusalem, and should not prevent peace.”Moreover, Bassa noted that if peace is negotiated for a two-state solution, the Palestinians would be able to have an embassy of their own in east Jerusalem.“The question will be: What is considered east and west, and how the city will be divided and managed,” he said. “But the issue of reassuring the Palestinians that it is not one-sided, and will not change [the status quo] in Jerusalem, should be emphasized.”Shmuel Ghatan, 51, who owns Iran Bazaar, a Judaica and Iranian carpet shop on Ben Yehuda Street, said the move would send a firm and important message to the world.“It’s good that the embassy comes here, because we needed it here a long time ago,” he said.“It will be good for business and the capital, because tourists from all over the world will come to Jerusalem and know it is the capital of Israel.”Meanwhile, Merav Schejtman, 50, a manager of a bookstore off Jaffa Road, said the relocation will likely not go forward.“I think it’s bullshit,” she said.“And it’s a problem, because a lot of people abroad do not think Jerusalem is the capital of Israel, and until something happens with the Palestinians, it’s not going to move here.”Asked for a comment on the matter, a US Embassy spokesperson issued a brief, albeit decidedly neutral, response.“Since Israel’s founding, administrations of both parties have maintained a consistent policy of recognizing no state as having sovereignty over Jerusalem,” the statement read.“Every US administration, Republican or Democrat, has taken the position that the status of Jerusalem must be permanently resolved through negotiations between the parties.With regard to the Jerusalem Embassy Act, Administrations since 1995 have consistently exercised a waiver because we have determined it is in our interest to do so.”