Tzipi Livni: Israel is weak, isolated without the US

"Netanyahu committed the original sin of intervening in American domestic politics and ruined relations with US," says the Zionist Union knesset member. 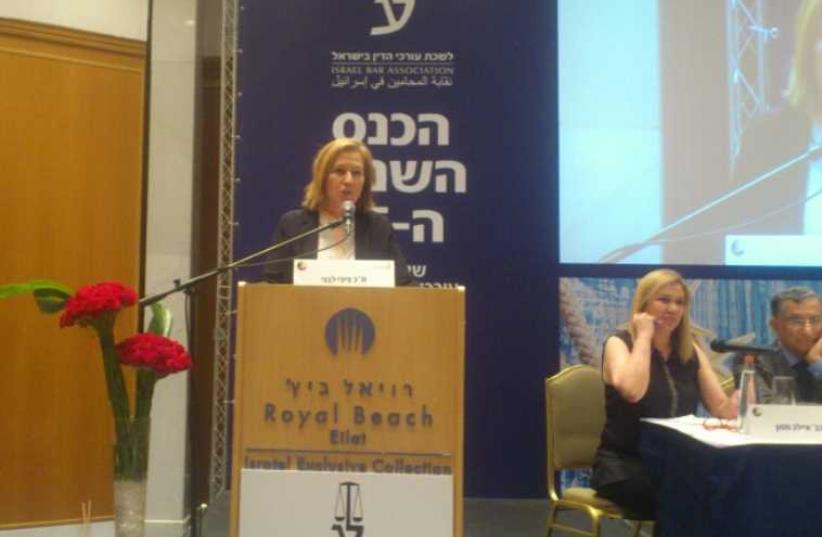 MK Tzipi Livni at the Israel Bar Association conference in Eilat‏.
(photo credit: JEREMY BOB)
Advertisement
Prime Minister Benjamin Netanyahu is eroding Israel’s relations with the US, leading to the Jewish state’s diplomatic isolation, Zionist Union MK Tzipi Livni said Tuesday.Speaking at an Israel Bar Association conference in Eilat, Livni said the prime minister had “committed the original sin” of “intervening in American domestic politics and ruined relations with the US” – a reference to Netanyahu’s March speech to Congress without the approval of US President Barack Obama.The former foreign minister continued that much of Israel’s security and ability to project strength “depends on US support,” pointing out that even in the heat of war, Israel’s ability to finish an operation and achieve its postwar aims depended on the US.According to Livni, the country has a choice of being seen as it is now, “a small, isolated country,” or as it could be seen if relations with the US were repaired – “a country with deep links [to] and support” from the world’s most powerful country.She said that Israel needed to be strong not just militarily, but also diplomatically.“There are those who wrongly think that if you talk tough, Israel will be strong. They are wrong,” she said.She contended that the prime minister’s policies had led the Palestinians to see “diplomatic weakness” that had encouraged them to “drag” Israel before the UN Security Council, and to try and prosecute IDF soldiers in the International Criminal Court.She also recalled Netanyahu’s pre-election warning that “the rightwing government is in danger. Arab voters are going en masse to the polls. Left-wing NGOs are bringing them on buses.” He later retracted the statement after his reelection.Livni said such comments made it “hard to convince the world that [Netanyahu is] committed to peace.”Further, she warned that the new government would reduce democracy by attacking media freedom and limiting the Supreme Court’s powers.She also commented on Justice Minister Ayelet Shaked’s Monday statement that she was being unfairly attacked as part of the “sons of darkness.”Livni stated that “I don’t call anyone darkness,” but that everyone should see clearly that Shaked was out to limit Supreme Court powers.Citing former prime minister Menachem Begin, Livni said he had stood against the “dictatorship of the majority” since the “majority is not always right” – despite Shaked’s insistence that the Supreme Court should give way to the Knesset as the majority’s elected representatives.Netanyahu’s former national security adviser Ya’acov Amidror, who spoke shortly after Livni, rejected her assessment of Israel-US relations.Amidror said that the problems “are not about interpersonal relations – there are substantive differences on two huge issues: Iran and the Palestinians.”He said the disagreements on those two issues far overshadowed any personal problems between the two leaders – though he did not deny that the two did not get along.The panel at the conference also included Israel Bar Association international section head Gideon Fisher, American Bar Association president- designate Hilary Bass, former minister Yossi Beilin, Zionist Union MK Nachman Shai, and Channel 1’s Ayala Hasson.