Six Day War hero: We must act like the chosen people 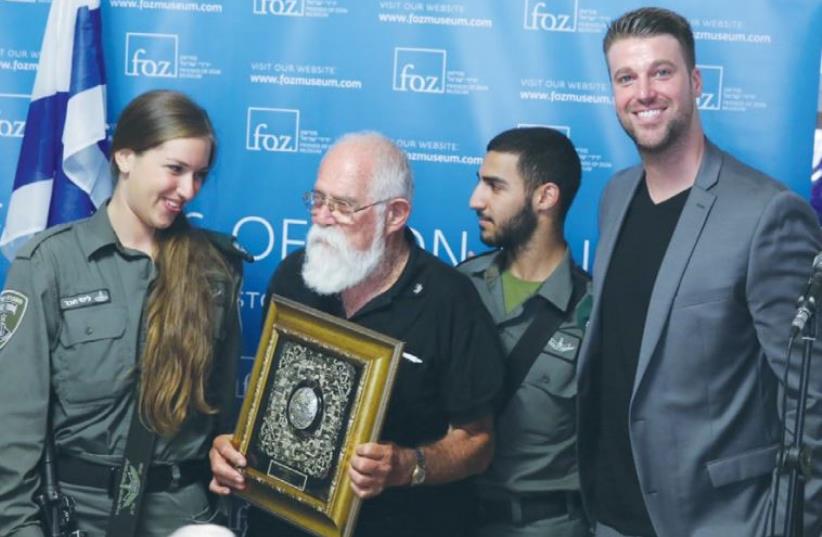 SHIMON Cahaner (second left), flanked by two Border Police officers, holds up his Guardian of Zion award presented to him by Friends of Zion Museum CEO Michael Evans (right) yesterday.
(photo credit: YOSSI ZAMIR)
Israelis must act with compassion as the chosen people should, Six Day War hero Col. (res.) Shimon “Katcha” Cahaner said on Sunday as he was honored on Jerusalem Day by the Friends of Zion (FoZ) Museum in the capital.“In order to be the chosen people, we have to act like the chosen people, and we have not a short way, and not an easy way, to go in order to act like the chosen people,” he told a room full of several dozen of his fellow Six Day War vets.“Why was the Second Temple destroyed?” Cahaner, 81, asked, rhetorically. “It was destroyed because of corruption – I don’t like the term ‘baseless hatred’ – and social gaps, between rich and poor, as well as because of religious and nationalist zealotry.”He urged all Israelis “to lend a helping hand” to those less fortunate. “I rely 100 percent on this group of people,” he said, pointing to his former comrades.Cahaner, a former chairman of the Ammunition Hill National Memorial Site, was accompanied by his wife. The couple live on Kibbutz Neveh Eitan.“Katcha,” as he is best known, became famous for his heroic role in the five-hour battle for Ammunition Hill on June 6, 1967, in which 37 Israelis and 70 Jordanian fighters were killed.He served as the deputy battalion commander in Ariel Sharon’s elite 55th Brigade, which captured the strategic position from the Jordan’s Arab Legion after fierce fighting on Sultan Suleiman Street, and after his commander was wounded, led his troops triumphantly through the Lions’ Gate into Jerusalem’s Old City.Cahaner thanked the Friends of Zion Museum for providing him with a certificate of honor for his heroism in the liberation of Jerusalem.“There’s no doubt that this is exciting, and being here at the museum and meeting all of you [fellow veterans] is already enough,” he said, with obvious emotion. “We are old enough to know that you need to be strong in life, and be in the right place at the right time.“Our luck was that we had the privilege of being part of the liberation of Jerusalem. We all knew where we had to jump, and what we had to do. We arrived in Jerusalem at 7 a.m. We prepared to do battle for at least 10 or 12 hours, and we completed the assignment, which is the most important thing.”“Every day, I feel the honor that I had a role in the liberation of Jerusalem,” he added.Friends of Zion Museum CEO and founder Michael Evans Jr. presented Cahaner with its Guardian of Zion award, and praised the delegation of war vets and Border Police officers who visited the museum in downtown Jerusalem on Sunday.“Each and every one of you here today is a hero,” Evans said. “I wasn’t born in 1967, but the call that you’ve sounded has impacted my life. Without you, we probably wouldn’t be here in this place today. This museum probably wouldn’t exist. All of you are my heroes.”Both the war vets and the Border Police officers appeared to thoroughly enjoy their tour of the Friends of Zion Museum.The museum, which was opened last year by US Christian Zionist leader and writer Dr. Mike Evans (Michael Evans Jr.’s father), employs advanced technology to offer visitors a virtual tour of Israel’s history and heroes – at least one of whom reciprocated the honor on Sunday.