Organizers demanded that the surfers would not compete under the Israel flag and wouldn't be allowed to use any symbol identifiable with Israel on their clothes or surfboards. 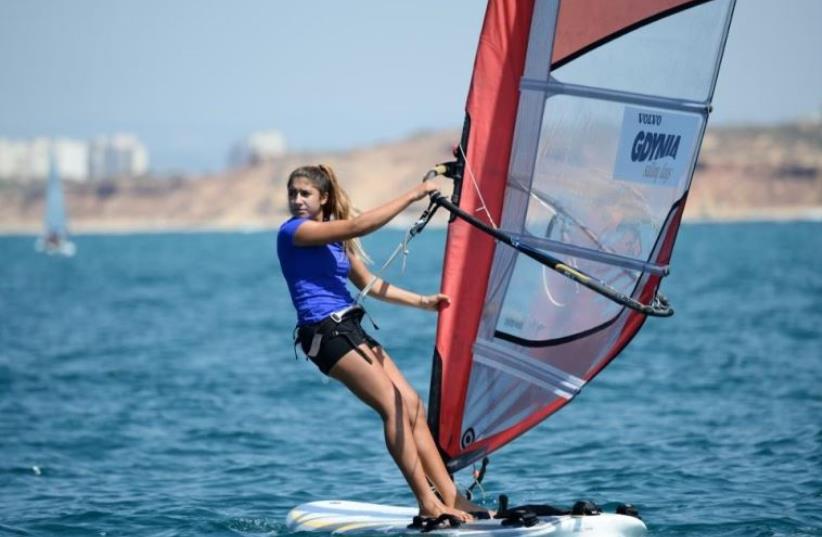 Windsurfer Noy Drihan
(photo credit: AMIT SHISEL/ISA)
Advertisement
World Sailing announced on Sunday that it is conducting an investigation and seeking clarification from the Malaysian Organizing Authority of the Youth Sailing World Championships after Israel was unable to send a delegation to the event in Langkawi, Malaysia.Israel’s Yoav Omer and Noy Drihan will not have an opportunity to defend their titles at the championships, which got underway on Sunday, after the Israel Sailing Association (ISA ) said last week that it will not be participating in the event due to the demands made by the organizers and the fact the surfers had yet to receive visas.The ISA informed World Sailing – formerly called the International Sailing Federation – the International Olympic Committee and the hosts that Israel will not be taking part as the organizers demanded that the surfers would not compete under the Israel flag and wouldn’t be allowed to use any symbol identifiable with Israel on their cloths or surfboards.The hosts also said that should an Israeli win a gold medal the Israeli national anthem would not be played.“As with all diplomatic issues this is quite a delicate matter,” said World Sailing President Carlo Croce in a statement released on Sunday.“World Sailing is aware of the current commentary in the public arena, and have reason to believe that some of the comments may not be accurate or possibly based on misunderstandings.”Croce insisted World Sailing will not accept a situation in which one nation is unable to compete.“World Sailing is committed to ensuring participation in our sport by competitors from all nations, and is taking this issue seriously,” he said. “A member of the World Sailing Executive is on route to Malaysia to investigate this issue and is seeking clarification from the Malaysian Organizing Authority.“World Sailing expects the organizing authority of its events to allow sailors from all nations to compete on an equal basis.This expectation is made clear in the bid process and is set out in the contractual documentation governing our events.“World Sailing is not in a position to comment on this further until our investigation is complete.”ISA chairman Gili Amir threatened last week to file a lawsuit against World Sailing and the host country.“As we have yet to receive visas, 24 hours before our scheduled departure date, and considering the restrictions and difficulties the organizing committee has placed on us, we have decided not to take part in the competition,” Amir said last Wednesday.“The Malaysians’ demands are unacceptable, and as we haven’t received the visas, we decided not to participate. We condemn the unsporting conduct of the organizing committee. We will not agree to be humiliated.”Omer claimed the gold medal in the boys Under-19 competition in the previous championships last year in Gdynia, Poland, while Drihan won the girls U17 and U19 events.(Photo: Winsurfer Yoav Omer, Credit: