A group of 10 past, current, and future Major League Baseball players including first-baseman Ike Davis and former outfielder Gabe Kapler are in the country for a week-long tour. 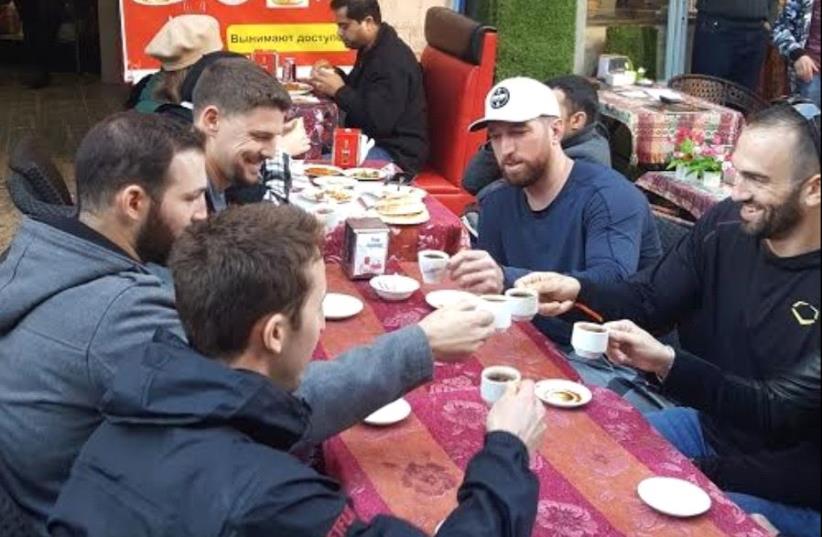 From left, Corey Baker, Cody Decker, Ryan Lavarnway, Ike Davis, Josh Zeid drink coffee in the Old City on Saturday.
(photo credit: BEN FISHER)
Baseball, a sport most commonly associated with the United States and perhaps Canada, has made inroads in popularity in countries as wide-ranging as South Korea, Venezuela and Curacao but has never truly gotten off the ground in Israel.That is, until now.A group of 10 past, current, and future Major League Baseball players, including first-baseman Ike Davis and former outfielder Gabe Kapler, are in the country for a week-long tour that has seen them help to break ground at a new baseball field in Beit Shemesh, meet with MK Michael Oren, who hails from the United States, and enjoy the typical tourist sites around the country, including the Dead Sea, Masada and Jerusalem’s Church of the Holy Sepulchre.The majority of them (one is rehabbing from Tommy John surgery) will be playing for Team Israel during the next round of the World Baseball Classic, an international tournament that ultimately is the world championship of the sport.In September, Team Israel beat Brazil and Great Britain to advance to the next round, which will take place in Seoul, South Korea in March.The trip, co-sponsored by Jeff Aeder, founder of the Jewish Baseball Museum, and JNF Project Baseball, was organized by the Israel Association of Baseball, a group founded in 1986 by olim baseball enthusiasts. The IAB has over 1,000 members playing in its leagues, some of whom met with the MLB players during the visit.The motivation for bringing the players, most of whom had never set foot on Israeli soil, to see the country, is two-fold. They will not only have a Israeli fan base rooting for them in March (and hopefully in later rounds in the spring), but the Israel Association of Baseball hopes that the trip will inspire and motivate them while they’re playing.The federation hopes the trip to the Holy Land will give the players something bigger than themselves to play for.Margo Sugarman, secretary general of the IAB, is an olah from South Africa who became interested in baseball a decade ago when her son started playing.Since then she has coached teams and even become a certified umpire after passing the officiating course.“We brought [the players] here to have some kind of connection [with Israel]. That way, when the tournament actually starts in March, we’ll have people really, really excited about it,” she said.Sugarman has been traveling with the group and noted that it has been “a real breakneck trip, the schedule has been very tough. We were supposed to meet with Natan Sharansky but… we were too busy!” After a few more plates of hummus and cups of coffee with cardamom, the players head home on Wednesday ready to take on Chinese Taipei, Korea and the Netherlands in Seoul, with a much better idea of the country they are representing.