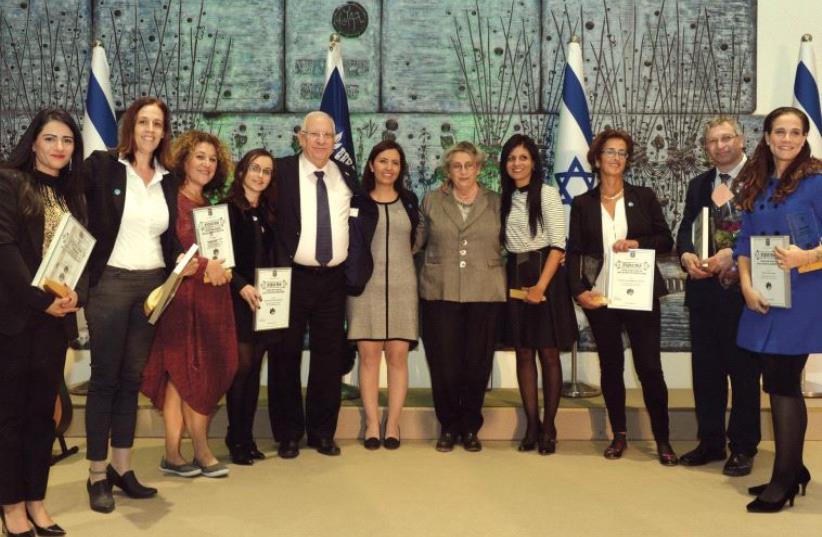 PRESIDENT REUVEN RIVLIN his wife, Nechama, flank Social Equality Minister Gila Gamliel yesterday at an event marking the International Day for the Elimination of Violence Against Women.
(photo credit: HAIM ZACH/GPO)
Advertisement
Social Equality Minister Gila Gamliel and President Reuven Rivlin joined forces on Thursday in a campaign to raise public awareness of the need to eliminate violence against women.The campaign is in line with the International Day for the Elimination of Violence Against Women set by a United Nations resolution passed on December 17, 1999.The resolution was prompted by the assassination in the Dominican Republic of three of the four Mirabal sisters who were political activists engaged in clandestine activities with the aim of unseating dictator Rafael Trujillo. They were murdered on November 25, 1960.“Violence against women and girls is a human rights violation, public health pandemic and serious obstacle to sustainable development.It imposes large-scale costs on families, communities and economies. The world cannot afford to pay this price,” said outgoing UN Secretary-General Ban Ki-moon.Many countries do not necessarily observe November 25, but choose a date which is fairly close.In Israel’s case, it was November 24, though various women’s organizations held their own functions on other dates.Rivlin, Gamliel and moderator Lucy Aharish made the point at the President’s Residence that violence against women is indiscriminate, striking all strata of society.It comes in many forms: beatings, rape, psychological and emotional torment and economic deprivation. Some women do not even recognize that they are victims, while others not whole who do realize what’s happening to them are either ashamed or embarrassed, and refrain from reporting such incidents to the police or telling anyone else.That for many years was the case of Lior Gal Cohen, who was sexually abused by her father, her psychiatrist and a close family friend, and in each case didn’t know what to do, and remained silent. Seventeen years ago, she reached the conclusion that she would no longer carry the burden alone and joined the Rape Crisis Center as a volunteer, accompanying sexually abused women when they filed complaints with the police – something she had never done for herself. These days she is quite open about her horrific experiences, hoping that by talking about them, she can motivate others to complain in real-time.In earlier years she had tried to hint at what had happened to her, but people either didn’t want to know or didn’t want to understand.When her daughter asked her why she had been silent for so long, her reply was, “Because there was no one to listen.”“If it happens to me,” said her daughter, “I’ll come and tell you, because I know you’ll understand.”It was impossible to tell how many of the close to 300 women in the room at the President’s Residence on Thursday had been victims of assault, but the national statistic quoted by both Aharish and Gamliel was one in three.Looking out into the audience Rivlin said: “You are not guilty!” Referring to the ongoing battle for the status of women, Rivlin said: “Today, we’re not here to fight for the status of women but to protest against the violence perpetrated against women.”It’s a phenomenon encountered daily in the family, in the workplace and elsewhere, he continued.There has been some progress in reducing violence thanks to various organizations that have dedicated themselves to this struggle, said Rivlin, but sometimes it seems as if the battle is a lost cause. To think this way is a mistake, he said, urging all those engaged in eliminating violence against women to continue with their work.Gamliel stressed that victims must not be silent.“There is too much silence,” she said, noting that 14,000 complaints are filed each year. “Violence against women is a real threat to society,” she said.She thought it important to give recognition to organizations that have done significant work toward eliminating violence against women, and said that the choice had been very difficult given that it required as broad a representation of Israel’s demographic mosaic as possible.Recipients were Orit Sulitzeanu, executive director of the Rape Crisis Center; Maki Hacham Neeman, founder, and Tamar Schwarz, CEO, of Women’s Spirit; Hodil Abu Habla, a social worker and founder of a shelter for battered Arab women; Noach Korman, founder, and Zilit Jakobsohn, CEO, of Bat Melech, a shelter for religious victims of domestic violence; and Efrat Pudem of the Tmura Center, which uses the legal system to promote equality and end discrimination against women, minorities and other disadvantaged populations.