"The lack of opportunities for young women to be involved in religious services has become a big educational problem for girls." 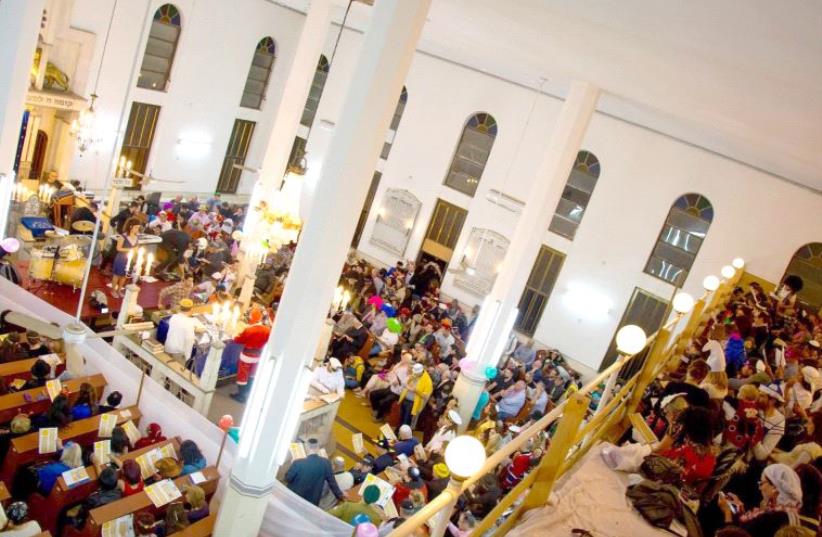 A packed house for the Purim megila reading in 2016 at the Tel Aviv International Synagogue
(photo credit: Courtesy)
Advertisement
The Tzohar national-religious rabbinical association is joining up this year with the Ohr Torah Stone network of educational institutions to hold some 400 readings of the Megila for the upcoming Purim holiday around the country.Dubbed Megila Bakehilla (Megilla in the community), the project will offer the readings of the Book of Esther at community centers, local entertainment venues, and this year fire stations as well, with the goal of making Purim and its various traditions and customs more accessible to Jews of all religious backgrounds.Megila Bakehilla readings are specifically not being held in synagogues so as not to deter people who are not regular synagogue goers and who may otherwise be dissuaded from attending a reading in an unfamiliar atmosphere, Tzohar has said.The decision to reach out to the fire stations came in recognition of the challenging months firefighters experienced around the country in this past year’s forest fires. Plans are in place for readings in stations in many cities, including Ashdod, Bnei Brak, Tiberias and others.“We learn from the mobility of the mishkan (the portable Tabernacle in the desert) that Judaism does not wait for Jews to come to it, but rather goes out to them wherever they are,” said Ohr Torah Stone founder and chancellor Rabbi Shlomo Riskin.“This program enables everyone access to the traditions and teachings of Purim in a way that promotes unity and understanding within our greater society.”Rabbi David Stav, chairman of Tzohar and co-chancellor of Ohr Torah Stone, said that Purim is one of the Jewish holidays that “inspires the participation of Israeli Jews of all backgrounds and levels of observance,” and that it is therefore an opportunity to get people involved in Jewish life.“We welcome the chance to use this holiday as an avenue to get all Israelis involved in their religion and feel more attached to their nation and traditions,” said the rabbi.A list of the megila readings is available on the organization’s website.Beit Hillel is another national-religious group that has put an emphasis on megila readings, in particular those for women by women.Although the organization is not itself holding megila readings, Beit Hillel has called for women’s readings to be held in religious communities where there is a demand for them, and its Facebook page has listings of several women’s megila readings around the country.Rabbanit Dr. Hannah Hashkes, a member of Beit Hillel’s executive committee, noted that in recent years there has been a growing trend in the religious-Zionist and Modern Orthodox world to include women to a greater extent in religious life.She said, however, that Jewish law is nevertheless still an obstacle to greater integration of women in many religious services and practices in Orthodox communities, but that Purim and reading the megila is an example of where Jewish law does not restrict female participation.Three years ago, Beit Hillel issued a ruling that it is permitted for women to read the Torah and for other women to fulfill their obligation of hearing the megila by attending a reading by a woman. This ruling is based on strong foundations within the Talmud and later commentaries and codifications.“Megila readings for women by women are a very valuable educational tool to educate young religious women and to help them feel part of the community and not like outsiders when it comes to religious practice,” said Hashkes.“The lack of opportunities for young women to be involved in religious services has become a big educational problem for girls. Synagogues are big part of our community and lifestyle, but girls have no reason to come because they can’t participate, which becomes an even greater problem after they become bat mitzva at the age of 12. We need to make them feel part of the community, and megila readings are one way to do this.”