Victims of terrorism have a much-needed vacation in Tiberias

‘We want to bring them back to the people that they were before the attack.’ 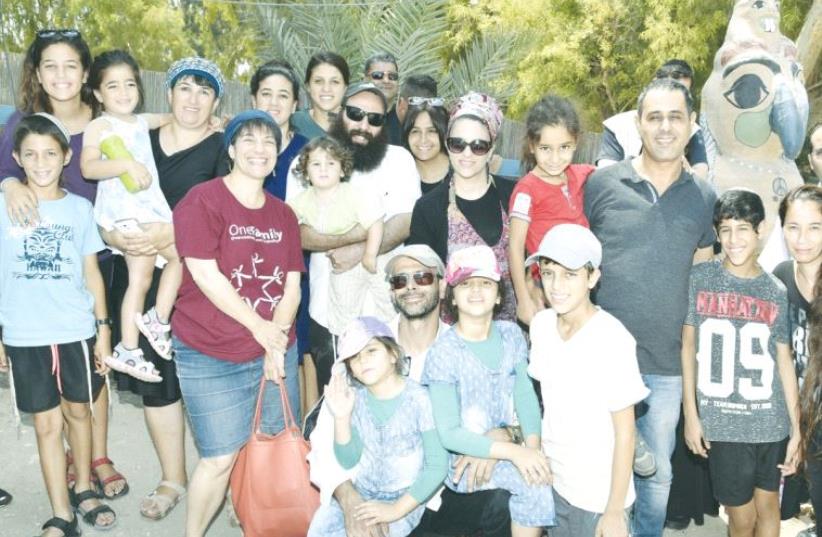 A GROUP OF terrorism victims and their families pose for a photo at a three-day retreat this week in Tiberias organized for them by the NGO OneFamily.
(photo credit: SARAH LEVIN/ONEFAMILY)
Advertisement
“The hotel was beautiful, I was able to rest, and clear my head,” said Avi Avitan who was injured in February after a terrorist attack at a Rami Levy supermarket.Israeli victims of terrorist attacks and their families gathered this week at the Leonardo Hotel on the Kinneret (Sea of Galilee) in Tiberias to participate in a three-day retreat, meant to give these victims a vacation and help them recover from their traumas.Forty-five families totaling around 200 people partook in activities including hiking and kayaking.The retreat, which gathered victims of terrorist attacks that occurred from 2014 to 2016 was organized and funded by the nonprofit OneFamily, a group that seeks to empower victims of terrorism and enable them to reintegrate into society through counseling, legal and financial assistance, and by hosting retreats like the one in Tiberias.According to the Foreign Ministry, from September 13, 2015, to July 25, 2016, 40 people have been killed in terrorist attacks and 517 wounded including four Palestinians.Director of OneFamily, Chantal Belzberg, said that the purpose of the organization and the retreat is to help these people recover from the massive shock and trauma that results from being a victim of terrorism.“We want to bring them back to the people that they were before the attack, the same husbands, the same mothers,” she said.The origins of the OneFamily organization stem from the August 2001 terrorist attack on the Sbarro restaurant in Jerusalem, which killed 15 people and wounded 130. The day of the bombing coincided with Michal Belzberg’s birthday, who was 12 years old and preparing for her bat mitzva. In light of the attack, Michal decided to forgo a bat mitzva party and instead raised money for victims of the attack, bringing in over $100,000. However, Michal and her family (Chantal is Michal’s mother) decided not to stop there and founded OneFamily, which has assisted thousands of terrorism victims with their transitions back to society.This is not an easy task, as the majority of survivors in the retreat faced near-death experiences within the past year. According to Yehuda Ish Shalom, a clinical social worker for OneFamily, these victims “are still adapting to the new reality.” Ish Shalom tells the participants that it is “normal to feel abnormal.”Participants also took part in group therapy sessions where they were able to bond and share experiences.“It is unbelievable how much support these victims get from each other.” said Mindy Levinger, the Jerusalem-area director of OneFamily.“A one-hour group therapy session ended up going for nearly four hours. It was as powerful as 100 psychologists.”According to Ish Shalom, group therapy plays an important role in the recovery process.“It is something liberating for the participants. They are not judged and they are surrounding by people who understand them... They hear other peoples’ source of strength and they can use it for themselves.”For Avitan, the best part of the retreat was meeting others with similar experiences. “The retreat was excellent and it was great to meet other victims of attacks,” he said Ish Shalom said that the retreat built upon past retreats to provide more focus on the families of the victims. “We learned from former retreats that the spotlight is aimed at the injured, but spouses’ lives have changed significantly as well,” Ish Shalom said. “Spouses were coming to us and saying: ‘What about our needs and our feelings?’” For many victims of terrorism, One- Family provides an essential resource that helps them recover emotionally and deal with financial hardships.“After survivors get out of the hospital many feel alone, some feel that their friends forgot them – that’s where we come in,” said Levinger, “We are a family that is always there.”According to Chantal Belzberg, terrorism victims face an uphill battle in obtaining adequate government assistance. “How does a terror victim prove that he is unable to sleep because of nightmares?” she asked.“On the surface they seem fine, but underneath you don’t realize the level of physical and emotional trauma.”Avitan said that Israel’s immense bureaucracy is the greatest challenge.“The state does not give a lot, and there is a lot [of] bureaucracy, I just received my aid check from April after three months. This is the money I depend on to feed my family,” he said.OneFamily hopes to fill the gap, providing financial assistance and aid to victims and their families.Depending on their individual circumstances, OneFamily gives assistance for obtaining holistic medicines not subsidized by the government and has funded multiple weddings and bar and bat mitzvas.An Israeli couple that was injured during the 2016 Brussels airport bombing, has also received aid from OneFamily. According to Levinger, the airport bombing has not been recognized as a terrorist attack by the Israeli government, making Israeli victims unable to receive government assistance.Despite the emotional, physical and financial hardships terrorism victims face, the OneFamily retreat successfully provided the families with a break from the routines of daily life. A yoga session on the second day of the retreat and a trip to the Hamat Gader hot springs on the third day were some of the events that took place.According to Levinger, the One- Family organizations is looking to continue and grow. Their next project is a family adoption program, where wounded or bereaved families will “adopt” fellow wounded or bereaved families and help each other recover in tandem.