By JPOST.COM STAFF, JONNY PAUL, AP
MARCH 18, 2010 12:02
Dog approaches Kassam 311
(photo credit: Associated Press)
Advertisement
Israel warned of a harsh response on Thursday afternoon after a Thai greenhouse worker was killed when a Kassam rocket fired by Gaza terrorists exploded in the Netiv Ha’asara area.The man, in his 30s, was evacuated to Ashkelon’s Barzilai Hospital, where doctors were forced to pronounce him dead.A small Islamist faction calling itself Ansar al-Sunna claimed responsibility for the attack.
In a statement e-mailed to reporters in Gaza, the al-Qaida-inspired faction said the attack was a response to Israel's "Judaization" of Islamic holy places in Jerusalem and elsewhere in the West Bank.A second group, the Aksa Martyrs Brigades, also later claimed responsibility.Vice Premier Silvan Shalom warned that the attack would lead to a strong reaction, and said that Hamas was ultimately responsible.“It is severe escalation,” said Shalom in remarks broadcast on Army Radio. “Israel will not return to the situation of before Operation Cast Lead. The response will be particularly fierce...I hope Hamas will learn a lesson.”The attack came on the same day as a visit to Gaza by Europe's top diplomat, EU foreign policy chief Catherine Ashton, who had just crossed into the territory when the rocket was fired."I condemn any kind of violence. We have got to find a peaceful solution to the issues and problems," she said. She was the most senior international official to visit Gaza in more than a year. 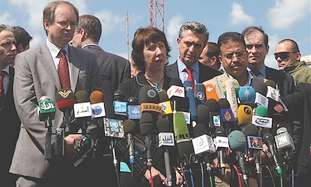