The rally is symbolic because of fears that the plight of the kidnapped teens would be overshadowed by the soccer games in Brazil. 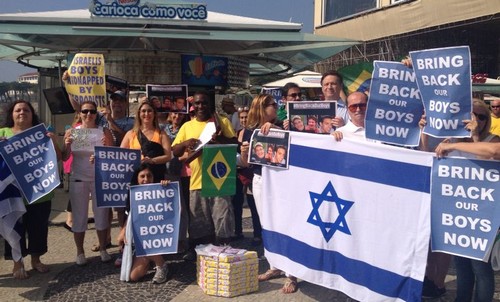 Dozens of Brazilian Jews held a demonstration at the site of the World Cup in Rio De Janeiro on Tuesday, calling for the release of kidnapped Israeli teens Gil-Ad Shaer, Eyal Yifrach and Naftali Fraenkel.The rally was one of many held around the world but it was considered more symbolic, because there were fears that the plight of the kidnapped teens would be overshadowed by the soccer in Brazil. “The international media has been silent so we decided to deliver the scream of the kidnapped teens at the event that the world is watching every day,” said Rabbi Rami Avigdor, the chairman off the Centro Kehila organization, which works to enhance Jewish identity in South America and organized the rally.Attendees hoisted signs with the slogan “Bring Back Our Boys Now.” They were addressed by Deputy Religious Services Minister Eli Ben-Dahan (Bayit Yehudi), who also helped organize the rally.“You have proven that the effort to return our kidnapped teens crosses continents and unites Jews around the world,” Ben-Dahan told the crowd.A mass rally will be held outside the Israeli Consulate in New York next Tuesday. The event will be called a solidarity rally with Israel and not for the kidnapped teens, in hopes that they will have been returned to their families by then.