Yaron Loubaton is the improbable designer behind some of the most advanced military machines – and innovative children’s toys. 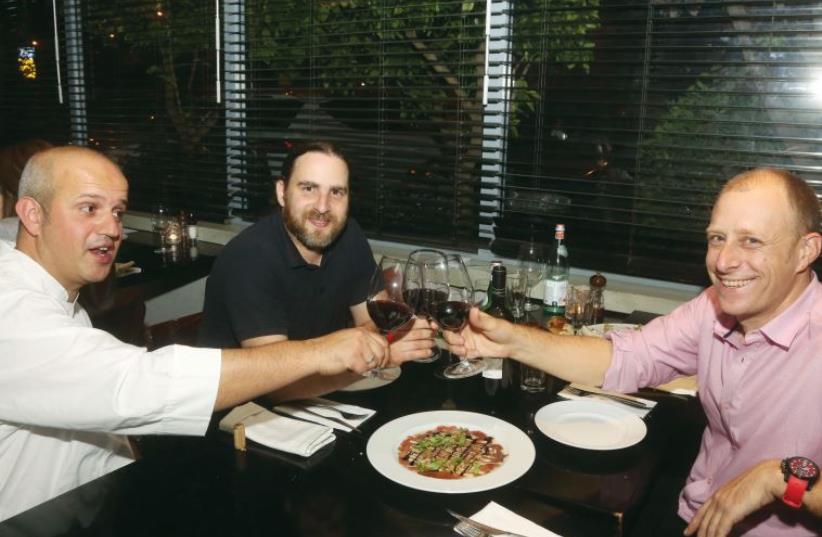 Designer Yaron Loubaton (right) raises his glass with chef Moti Ahana (left) and interviewer Asaf Finkelstein.
(photo credit: ILLUSTRATIVE: MARC ISRAEL SELLEM)
Advertisement
How many people do you know that actually get to do what they love for a living? How many of those people get to take their two favorite hobbies and combine them? Meet Yaron Loubaton, 43, a graduate of the Bezalel Academy of Arts and Design’s Industrial Design Department, and a much sought-after international designer. His daily schedule integrates two of the most conflicting ideas there could be in the world: designing battlefield weapons – such as operational vehicles for militaries throughout the world – and designing children’s toys marketed internationally.Loubaton is a fascinating personality full of positive contradictions. A grown manchild, formidably brilliant, his eyes sparkle when he talks of toys, then become serious when he describes war zones. “Captivating” hardly does justice to the conversation.

The Means: A gourmet meal at Jerusalem’s Hehatzer (“The Courtyard”) restaurant, Fumé Blanc by Dalton Winery and Altitude 624 by Barkan Winery.
Read More...
It’s a bit schizophrenic, your activities, wouldn’t you say? These are both areas that really attracted me, ever since I was a child, and I constantly looked for a way to get involved in them. I always say that I develop toys for kids, and also for bigger kids.
How do you kick off a career of that kind?When I completed my studies at the Bezalel Academy of Arts and Design, I accepted a position at a very large and highly respected Israeli company known as Eran Research and Development, and I started there as a member of the design team. During the five years I worked there, I went through any number of adventures and experiences. I designed medical equipment, consumer items, military products and also toys.
Tell us about a project you really loved working on...

While there, one project I designed was the first automatic robot in the world, the kind that patrols fences. It’s a primal, powerful experience that – to this day – sends shivers up my spine. Imagine taking a new path that no one has trodden yet; pure pleasure.
Wasn’t the development handled by engineers?

The designer is an inseparable part of the development team. One of the great things about designers is that they have to know exactly where each nut and bolt goes, and have to physically understand how their design is actually built. It doesn’t hamper the engineers and allows them to see the overview, how the project functions from start to finish. That way, it’s possible to be more creative and create breakthroughs for the rest of the professional development team.Once I made the first robot, I was approached by Israel Aircraft Industries, which was interested in developing the next generation of robots; I was asked to join their development team. I designed this robot for them in the form of a tactical vehicle, and it was the first in the world to function in conflict zones. This robot is structured on [the basis of] fast reaction time and misleading the enemy.
Can you explain? One of my goals with this project was to develop the option of a commando joining the vehicle, but also camouflaging any human sitting in the vehicle. It has no windows or roof; someone looking at it from the outside wouldn’t be able to see there’s a person inside. In this case, the design safeguards the soldier’s life in the best way possible.
That’s hardly child’s play… You’ll be surprised to hear that it actually is. During that entire period I was developing the robot-vehicle, I was imaging the “Transformers.” I kept thinking about the deterrent psychological effect this robot would have on invaders; it never gives me peace. So the vehicle has a little of that in it.Some years later, a friend told me he saw the emblem of the unit operating this robot, and it was…
No!Yes! The Transformers!
Wow.

It seems the thoughts going through my mind came across in the design, and they picked up on it.
As someone looking at that industry, do you have any particular insights? Recently, I’ve thought that modern warfare is very reminiscent of the Middle Ages. Initially, the knights wore clothes that enabled easy movement, which meant they could run faster. Once they began getting hit with arrows and ballistics they wore a sheath, another layer of sheathing and so on, to the point that the horsemen wore such heavy protection that if they fell off their horses, they died on the spot. In my view, the same process is happening in our world.Initially, tanks were relatively light and fast. Slowly they needed more layers of protection, until they became truly heavy and cumbersome. At some point, soldiers must be able to move quickly in the battlefield, but the need for protection prevents making faster moves. On the other hand, we’re lucky that human life is considered more valuable these days and far greater effort is invested in protecting life.
Israel is revered as a superpower in the international weapons market. Can you tell us about your experience from the Israeli viewpoint? Usually Israelis don’t say no to new challenges. In the past, I produced several designs for an American weapons company. One day, their vice president of development approached me and asked me to fly there for a private meeting. After a long flight I arrived at his office, where he asked me to design a sea vessel for a highly specific purpose (which obviously I can’t disclose here). Even though I’d never designed a sea craft in my life, my immediate response was that I’d do it. Today, it’s a much-sought item around the world.
What are some challenges you’ve had to overcome professionally?I worked at a company in Poland, on a huge long-term project that required a lot of translation assistance. After six months of joint work, when we’d already become very friendly with each other, one day we took a taxi to Warsaw and saw Orthodox Jews. Suddenly, the translator said, “I hate Jews!” I asked what bothers her about Jews, and she replied, “Their sidelocks.” I couldn’t hold back, and asked her, “Do you know I’m Jewish? I’m from Israel…”
Uh-oh… Her eyes widened in shock, and she said she was sure I was Palestinian, and if that’s true, I should consider becoming Catholic. I could sense a very deeply rooted anti-Semitism there, deep in the DNA. Of course, afterwards, the young woman claimed she actually loves Jews.
Just as the fisherman loves fish… Totally.
So, with respect to robots and warriors and tanks, how does that integrate with the development of toys?Developing toys is exactly the same thing, except it’s for the target population of children. It’s another area I hold dear. I was lucky that at the start of my career at Eran in that I worked with an amazing guy, Boaz Drori, and both of us felt a strong affinity with children and toys. We were completely drawn into it. I was so pleased that the company was attentive to our capabilities, and picked up the challenge. [Loubaton develops toys for infants and ages five to eight.] We brought a British designer to Israel and developed toys together, which gave me quality experience. Within just one year, we’d sold four concepts for toys to international companies.
Israel is called a start-up nation. How does that manifest in the world of toys?Currently, most international mega-toy companies base their business on independent findings. There are about 200 toy developers in the world, for whom it’s their primary profession. Of these, 30 are Israelis – so you do the math.It’s important to note that a large proportion of owners of these mega-toy companies are Jewish. From personal acquaintance with them, they are warm people whose hearts are deeply invested in toy development.
How do you explain this phenomenon? I once had a lecturer who gave us no peace, bombarding us constantly with tasks. He had this theory that “creativity is the consequence of constraints.” Perhaps the Jewish people always had a need to be creative, and used it in order to survive (laughter).
Have you ever been asked to design something that seems delusional?In our field, there is no such thing as “delusional” or “impossible.” That’s what’s so fascinating. If in 1969 a spaceship landed on the moon, then in principle everything can be designed. There’s no limit on imagination.
Which of your designs are you most proud of?I’ve received prizes from governments of various countries for different projects in the security industry. I can’t detail all of them, but one was a jeep known as “Musketeer” and another was the patrol-robot. It’s great because the judging committee comprises designers, so in fact it’s a form of professional acknowledgment.
Yaron’s score of the meal and wine: 10+ Hehatzer is a kosher, Mediterranean chef’s restaurant, specializing in grilled meat, casserole dishes and fish. Heading the restaurant is Chef Moti Ohana, a graduate of the Cordon Bleu Culinary School.Location: The First Station, Jerusalem Starters
• Aioli beef carpaccio in truffles with caramelized pistachios
• Endive, roasted beets and caramelized pecan salad in a balsamic-tomato vinaigrette
• Veal sweetbreads on a bed of tabouleh salad, with almonds and creamed aubergine
• Cauliflower in tehina Entrees
• Crisped gnocchi with goose liver, smoked goose breast and veal sweetbreads in mushroom and beef stock
• Fillet of sea bream with tabouleh, almonds and hot pepper confiture
• Veal cutlet in an orange sauce
• Crispy salmon in a spicy Asian vinaigrette Wines

Fumé Blanc by Dalton Winery Nose: Aromas of lychee, melon and light grapefruit balanced by a hint of smokiness from the barrel.Palate: The wine is rounded with light, balanced acidity and a plethora of fruitiness.Goes well with: Piquant dishes from the Thai kitchen, grilled chicken and smoked fish.
Altitude 624 by Barkan Winery Finds a fine balance between rich, dark fruit and sweet herbs, creating this vintage’s multi-layered complexity. Long-term maturation potential.Goes well with: Meat dishes in delicate sauce.