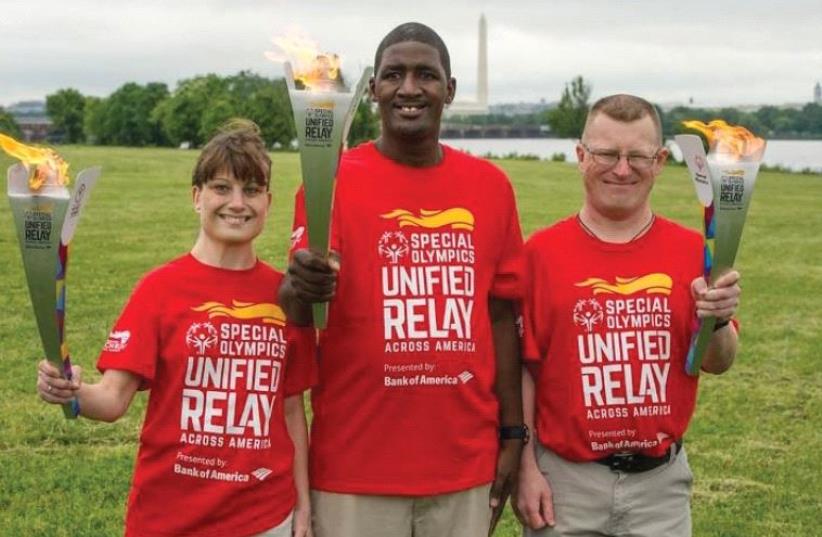 The Special Olympics torch relay in Los Angeles in 2015
(photo credit: SPECIAL OLYMPICS ISRAEL)
CENTERSome 1,200 athletes participated in Israel’s National Special Olympic Games on Sunday through Tuesday in Netanya.The games involved over a dozen sports, including, swimming, bowling, general athletics, judo, bocce, floorball, tennis, table-tennis, basketball, soccer, kayaking, snowshoeing and horseback riding. The event also provided family physical activities and a motor activities training program for people with disabilities.
Read More...
The participants, along with 500 escorts and coaches, were honored at a bearing of the torch opening ceremony for the games at Netanya’s Wingate Institute on Sunday.As part of the lead-up to the games, 57 billboards were placed around the country advertising the event.Israel’s Special Olympics were founded in 1985, and the country has been represented in four international games – in the US in 2015, Belgium in 2014, Greece in 2011 and China in 2007.
Beer to flow at Netanya, Herzliya OktoberfestThe world’s largest beer festival is making its way from Bavaria to central Israel.Modeled after the iconic folk festival that began in Munich, the cities of Netanya and Herzliya will host Oktoberfest events in conjunction with Germany’s Paulaner Brewery.With similar events already having taken place in Tel Aviv and Rehovot earlier this month, the Oktoberfest event in Netanya is set to take place September 28-29 at the YCenter complex in the Poleg Industrial Area.On October 5-6, the beer-drinking celebration will make its way to Herzliya’s Business Park, where revelers can enjoy themselves from 6 p.m. to midnight each day of the event.The venues will be transformed into beer gardens similar to the shared outdoor areas in Germany where Oktoberfest festivities take place.The festivals will include live performances and food stands with traditional Oktoberfest favorites such as bratwurst, pretzels and potato dishes along with a variety of brews imported especially for the occasion from Germany.
NORTH Swim across Kinneret in October race As the last days of summer come to an end, the international swimwear giant Speedo will host a swimming competition at Lake Kinneret on October 14-15.Participants in the Speedo Sea of Galilee International Open Water Swim can choose from various race lengths, including a cross-lake contest.Swimmers in the 10-kilometer professional competitive heat on October 15 will race from the eastern shore of the lake at Levanon Beach, finishing at the lake’s western shore at Gai Beach. A 3-kilometer race along with a 1.5-kilometer race will also take place on October 15.On October 14, a 1.5-kilometer and 500-meter race will occur.Alongside Speedo, the competition will be hosted in coordination with the Kinneret Cities Association, the Israel Swimming Association, the Tiberias Municipality and the Culture and Sport Ministry.The event is designed for experienced swimmers and swimming enthusiasts aged eight and up. Registration for the competition will close on October 12 at noon.
Austrian delegation visits Rehovot school for underprivilegedA delegation of Austrian politicians and community leaders headed by the president of the country’s National Council, Doris Bures, on Tuesday visited a school for underprivileged students with learning difficulties in Rehovot.The WIZO Maya Rosenberg Municipal Technology High School is attended by some 500 students, about 160 of whom are new immigrants from Ethiopia or the former Soviet Union. The school provides a special approach for students who come from dysfunctional family backgrounds and low socioeconomic status.The Austrian delegation, which was invited by Knesset Speaker Yuli Edelstein, held an unveiling ceremony for a plaque dedicated in memory of Barbara Prammer, the late Austrian National Council president.The delegation, including Austrian Ambassador Martin Weiss, also attended with representatives from the country’s Jewish community a ceremony in recognition of a major donation made to the school by WIZO Austria.
SOUTH Ashdod unveils housing complex for elderlyMore than 200 elderly individuals and couples are slated next year to enter a recently unveiled retirement housing complex in Ashdod.On September 22, the city held a cornerstone ceremony for the opening of the cluster of accommodations for elderly residents.The initiative was undertaken by the Ashdod Municipality in cooperation with the Immigration and Absorption Ministry as part of a broader plan to construct 4,000 residential units for elderly immigrants in Ashdod.
Farmers protest Turkish imports at Ashdod rallyHundreds of farmers from across the country gathered at Ashdod Port on Sunday to protest the import of fruits and vegetables from Turkey which have been flooding the Israeli market.The demonstration came in response to government approval of the Turkish goods intended to lower produce prices in Israel.The demonstrators, however, charged that the move has left Israeli produce rotting in warehouses and in fields.They also complained that despite the influx of foreign imports, there has not been a change in price or quality of fruits and vegetables available in the country.“The Agriculture Ministry and Finance Ministry decided to implement the envisaged elimination of agriculture by massive imports of vegetables, fruits, milk and meat,” said one of the protest’s organizers, Barak Omega. “It is time that we take responsibility for our fate.”
Cancel Subscription