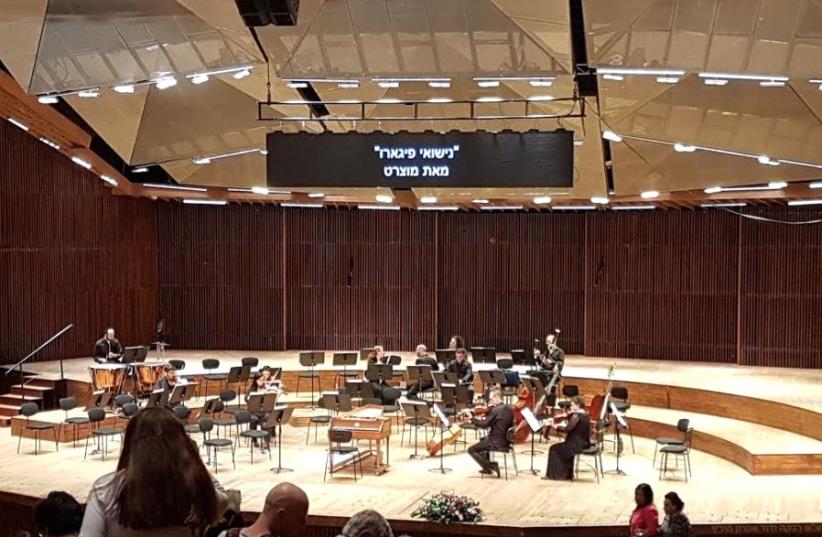 Interior of the Israel Philharmonic Orchestra in Tel Aviv
(photo credit: BECKY BROTHMAN)
Advertisement
■ THERE HAS been a decades-long relationship between the Tel Aviv Hilton and the Israel Philharmonic Orchestra. Every year, toward the end of autumn or the beginning of winter, the hotel management headed by Ronnie Fortis and the IPO Foundation headed by Michael Zellermayer, together with Maja and Aaron Frenkel, host a gala dinner that includes a concert by top-notch performers. At this year’s gala on November 28, the concert will be provided by baritone Thomas Hampson with pianist Wolfram Rieger and an IPO string quartet.
■ A CENTER for Religious Zionism was inaugurated early this month by the Friends of Kfar HaRoeh, a religious moshav and yeshiva on the Coastal Plain between Netanya and Hadera. Among those in attendance were Ze’ev Elkin, Jerusalem and environmental protection minister, Education Minister Naftali Bennett, MK Shuli Moalem-Refaeli and former education minister Yitzhak Levy.
The Center, or as it is called in Hebrew “The House of Religious Zionism,” will have a visitors’ center where the story of the achievements of religious Zionists in Israel will be presented in sight and sound. Elkin said that the project would give religious Zionists the opportunity to look back and see how people from their movement had influenced the development of the State of Israel.
■ MA’ALOT RESIDENT and United Hatzalah volunteer Mordechai Mammon recently attended a friend’s party in an Acre banquet hall During the evening, Avraham Shitrit, the drummer in the band, choked while eating a piece of steak. Mammon rushed across the hall and performed the Heimlich maneuver on Shitrit, repeating it a number of times until he finally succeeded in expelling the blockage from Shitrit’s throat, shortly before Shitrit lost consciousness. The entire incident was caught by the security cameras in the hall.
The footage shows Shitrit choking – attempting to breathe and cough in an attempt to dislodge the blockage. He even tried to take a drink, at which point those around him realized that he was in distress and tried unsuccessfully to help him.
Someone else who was present alerted Mammon to what was happening. Mammon had not noticed, as he was standing with his back to the stage. As soon as he became aware of the problem, Mammon went into action and after a strenuous effort succeeded in removing the obstruction from Shitrit’s throat.
Mammon later said that he became an EMT volunteer to help save lives after his sister was killed in a car accident. His whole raison d’etre for doing so was to help save lives, and he actually got to do that in the banquet hall.
Shitrit said that he felt like he was going to die until Mammon saved his life.
■ CERTAIN COMMERCIAL airlines started flying to Israel even before the founding of the state or immediately afterwards. One was the now-defunct American company Trans World Airlines. Another was British Airways, which last week celebrated 85 years of flying in Israel’s stratosphere.
Actually, it wasn’t always called British Airways, and the company that was established in 1974 is the result of mergers and name changes throughout the years. Nonetheless, British airline companies have been flying to Israel since soon after air travel was introduced to Britain. The first flights were military flights and civilian flights soon followed. To celebrate the 85th anniversary, British Airways CEO and global chairman Alex Cruz came to Tel Aviv to tell people associated with the industry just how important Israel is as one the company’s destinations.
The largest airline in the UK, British Airways currently operates 14 weekly flights from Tel Aviv to London.
In honor of the anniversary, British Ambassador David Quarrey and his partner Aldo Henriquez hosted a reception at the British Residence in Ramat Gan at which Cruz was the guest of honor together with Yael Katan, the commercial manager of British Airways Israel.