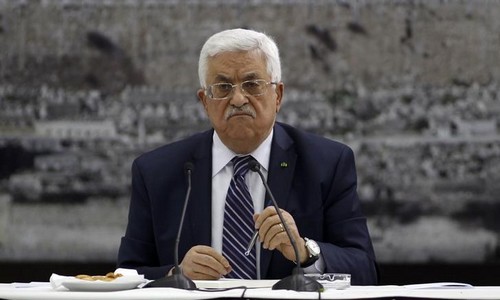 The office of Palestinian Authority President Mahmoud Abbas condemned Israel and accused it of escalating the violence in the region for its airstrike on Gaza Wednesday that killed a Palestinian militant. Israel's airstrike followed the firing of a rocket from Gaza into Israeli territory on Wednesday morning.The statement, carried on official Palestinian news agency WAFA, stated: "We hold Israel responsible for this escalation, which we consider an attempt to exacerbate the situation and pull the region into violence.”  Abbas's statement called upon the Israeli government to promptly stop what it called the “grave escalation."

Wednesday's rocket sent from Gaza narrowly missed a main artery in southern Israel as it landed in a nearby dirt field without causing any injuries.On Wednesday night the Israeli Air Force targeted Mahmed Awwar, 33, of Beit Lahia, killing him from the air, in a joint operation with the Israel’s Security Agency.The IDF charged that Awwar had been involved in many past rocket attacks against Israel, particularly in the last few months while he worked as a policeman for Hamas.“This terror infrastructure is a violent and extremist Salafi cell which has carried out several rocket attacks and has attempted to implement diverse terror attacks against Israel as well as attempts to target a helicopter.“The preemptive strike was intended to prevent Awwar from executing further attacks he had planned against Israel,” the IDF said.The Gaza launched rocket which hit the Eshkol region along Israel’s southern border was the first such attack since the new unity government jointly sponsored by Fatah and Hamas was sworn into office last week.