Analysis: Is the next 'Arab Spring' implosion around the corner?

Report of increasing restlessness of young Arabs will surely be on the Israel security establishment’s radar screen. 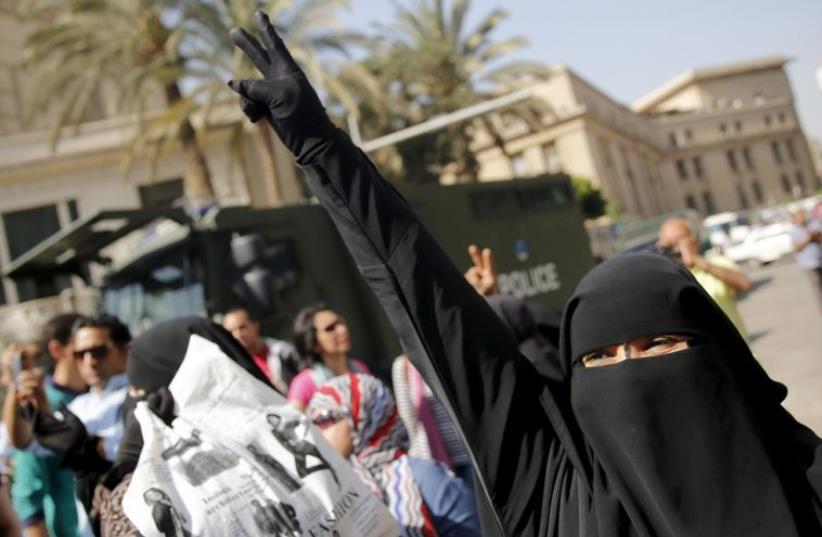 A Muslim Brotherhood member shouts slogans during an anti-government protest in Cairo
(photo credit: REUTERS)
Advertisement
The alarm bells sounding the impending youth revolt is perhaps the central takeaway from the UN’s report released Tuesday on the herculean challenges facing Arab states across the Middle East.The report’s findings on the increasing restlessness of Arabs aged 15-29 will surely be on the Israel security establishment’s radar screen.“Current estimates indicate that the number of inhabitants living in countries vulnerable to conflict in the Arab region is expected to rise from around 250 million in 2010 to over 350 million in 2020. That number is expected to double by 2050,” write the authors of the 2016 Arab Human Development Report. “The number of Arab countries affected by conflict increased from five in 2002 to 11 in 2016.”The causes of the Arab Awakenings that began in 2011 – or the currently less popular term Arab Spring – are alive and kicking in the Islamic heartland and North Africa. The UN reports outlines six sectors that could exacerbate the already widespread instability in the region.The factors are: “scant suitable job opportunities, weak political participation, poor-quality healthcare and education services, mismanagement of social diversity, the prevalence of inherited concepts and practices that promote gender inequality; and prolonged conflicts that undermine society of development gains.”If Arab leaders – monarchs and authoritarian military leaders – cannot address the factors blocking progress for young Arabs, the reports predicts “they will become a potent source of protracted social instability threatening human security.”To further stress the dangers ahead, The Economist wrote on Tuesday: “Arabs make up just 5% of the world’s population, but they account for about half the world’s terrorism and refugees.”The report’s 274 pages tiptoes around the causes of genocide, gender apartheid, pervasive economic corruption, and radical Islam by not, for example, naming Syrian dictator Bashar Assad, or Algeria’s incapacitated ruler Abdelaziz Bouteflika. There are many other Arab leaders that could be added. Boilerplate United Nations diplomatic – and at times nebulous – language dominates in the report.A former Israel diplomat with wide expertise in the Middle East told The Jerusalem Post: “The biggest problem is that the state is in charge of most of the national resources and suffocates any genuine free-market initiative of the young and talented. As long as the state can buy ‘peace’ by hefty subsidies, then it is okay.”The veteran diplomat added that once the trade-off fails, “trouble starts. There is almost no free market, no hi-tech (though many study it) and most important, corruption rages. These are the ingredients which will continue fueling the situation for the foreseeable future. Any cure? “Only a total implosion. All the rest are only temporary pain relievers.If half the population” is going nowhere, there is no chance for progress.This analysis helps to explain one of the report’s chief conclusions: “This widened social disparities, prompting people to rebel. Youth were at the forefront of the rebellions: Corruption and distorted development had driven them to despair of social mobilization.”The age of a deceptive calm in the stagnating Arab world has passed. The forward-looking recommendations of the report clash – one could argue – with the fixation on Israel as the be-all and end-all source of conflict in the region. The report cites Israel 29 times and claims: “The cause of the Palestinians remains the largest and most serious existential threat in the region as long as the Israeli occupation persists and as long as the Arab Peace Initiative of 2002 and other international efforts to resolve the crisis stagnate.”The UN study cites a 2015 Arab opinion index from the Arab Center for Research and Policy Studies that states: “75% of respondents believe that the Palestinian cause is not only a Palestinian issue, but an Arab one as well, and 85% oppose diplomatic recognition of Israel by their countries.”After the deaths of tens of thousands of youths during the nearly sixyear- old Syrian civil war, it is difficult to know how much credence to give to attitude surveys in the region. After all, 15 Syria youths painted a slogan on a wall in the city of Deraa in 2011 declaring: “The People Want the Fall of the Regime.” The regime carted them off to torture cells. Are they preoccupied with the Israel-Palestinian conflict? As the report notes, “Young people’s awareness of their capabilities and rights collides with a reality that marginalizes them and blocks their pathways to express their opinions, actively participate or earn a living.”The report omits any reference to the ubiquitous anti-Americanism and antisemitism in the region. The reliance on fundamentalist theology is approached indirectly: “Young people remain vulnerable to victimization by groups that misuse religion to benefit from its pivotal role in shaping identities,” notes the document.Political Islamic movements such as the Muslim Brotherhood are cited once. There are no warnings that mirror the comments of the distinguished Middle East historian Bernard Lewis who told the Post in 2011: “I don’t think it [the Muslim Brotherhood] is in any sense benign. I think it is a very dangerous, radical Islamic movement. If they obtain power, the consequences would be disastrous for Egypt.”Writing in his book The Arabs: A History (2009), the Oxford University Middle East historian Eugene Rogan said, “If the Arab peoples are to enjoy human rights and accountable government, security and economic growth, they will have to seize the initiative themselves.”On December 17, many Arabs will commemorate the self-immolation of Mohamed Bouazizi, the Tunisian fruit vendor who on that day in 2010 set himself ablaze to protest corruption in the now-defunct police state of former president Ben Ali, and set off the Arab Spring.The UN report largely shifts the onus to the ruling class in the Arab world to bring about change.There will be more Arab revolts and more self-protests along the lines of Bouazizi.Benjamin Weinthal is a fellow at the Foundation for Defense of Democracies.